Johnny Akbar Jepps, lead smokejumper for Mount Hood Aviation, is always first out of the plane, first into the fire, and first with the ladies. But the last thing he ever puts on the line? His heart. Until he meets a woman who simply rides away with it. Laura Jenson, wilderness guide and expert horsewoman, leads tourists from the Mount Hood Timberline Lodge into the wilds of Oregon. She knows the game and has no interest in some lady-killing, full-of-himself smokejumper. Not until Johnny lights her heart on fire. They both must take care not to get burned by the Wildfire at Dawn. 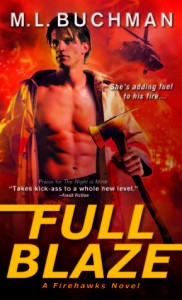 I rearranged my reading schedule in order to have a Firehawks marathon. I definitely enjoyed yesterday’s taste of this author’s combination of romance, adrenaline and suspense, so I wanted to continue with the rest of the series. (Book three, Full Blaze, will be up on Monday.)

The universe of wildlands fire fighting is utterly fascinating, which is a good thing, because one does emerge from each book having acquired a surprising amount of information about this dangerous, deadly and exhilarating profession. If you don’t walk away from these stories genuinely impressed with these utterly necessary people who fight fires in the middle of nowhere because they need to, and because we need them to, check for your heart because it must be missing.

The excitement of the story should have jolted it to life, in case you needed a jolt.

Wildfire at Dawn is the second book in Buchman’s Firehawks series. And I will say that it is necessary to have read the first book, Pure Heat, in order to really get the most out of this one. Wildfire at Dawn takes one of the secondary characters from Pure Heat and makes him the hero of his own romance, as well as the solver of a particularly nasty mystery.

Johnny “Akbar the Great” Jepps is the lead smokejumper for Mount Hood Aviation. He got that promotion at the beginning of Pure Heat, so events do follow.

When he meets Laura Jenson in The Doghouse, the MHA home bar, he’s captivated until he finds out that she’s a local. It’s hard to love ’em and leave ’em when they stick around. On that other hand, Laura is a wilderness guide, which makes her one of the few people who really get what he does (and why) who isn’t involved in the job. He keeps her wilderness safe, and she’s very aware of that.

She’s also perfectly aware that Johnny is a player, and she’s not interested in being played. He’s totally upfront about what he wants, but she’s just not into casual sex. She’s not looking for a relationship either, but neither is he. She respects that he is upfront, she just doesn’t want to play.

But instead of doing all the obvious things, Johnny seems to be interested in her. Not just interested in the obvious way, but interested in general. After a bunch of mixed signals and hurt feelings, as well as a nasty interfering fire, they move toward friendship. Especially after he helps her deal with a particularly obnoxious client who thinks that buying her guide services means buying her.

They drift into a relationship that neither one planned for. It throws Johnny completely out of his element. He never expected to feel so much, and doesn’t know how to deal with his emotions. So he hides from what he feels, pushing Laura away in lots of subtle ways, and driving his friends crazy as they see him throwing away the best thing that ever happened to him.

Until Laura finds herself caught in two forest fires, one right after another. And Johnny finally gets his head out of his ass and figures out just how much he has to lose.

Escape Rating B-: I would rate this one higher, but it is just plain too short. Johnny and Laura are both a bit shy of relationships because of messes in their respective pasts, but we didn’t get a clear enough picture of what happened, especially in Laura’s case.

In her case, it isn’t parental trauma, because we meet her parents and they are an absolute hoot. George and Jane Jenson named their daughter Laura Judy. For anyone who remembers the Jetsons animated series fondly, the jokes around their names is delightful. George Jenson really does work in the space age, his company builds the drones that Merks introduced in Pure Heat.

Laura is a terrific heroine, she’s smart, funny and professional. She’s part of the wilderness world without also being a firefighter like Johnny, so we get to see what its like to have a relationship (or try to) with someone who gets called at a moment’s notice to throw himself in harm’s way.

Johnny’s a bit more of an enigma. He started as a hotshot back when he was still in high school, and he’s never wanted to do anything else. He’s Indian (Asia not North America) and his background has some effect on his choices, but it doesn’t seem to be a big deal. More important for some bits of the story, he’s shorter than Laura and doesn’t care, although it does bother her a bit at the beginning. Still, it made him different, we don’t often see romantic heroes who are not basically “whitebread” and it’s rare for the heroine to be taller than her hero.

The most important relationship Johnny has (besides whatever is happening with Laura) is his smokejumping partner Two-Tall Tim. The way that they rely on each other, while at the same time not taking any shit from each other, is an excellent portrayal of friendship.

The mystery was a bit obvious, because the leading factors were kind of a “Chekhov’s Gun”. Something was introduced at the beginning that had to come back and bite someone on the ass. The climax still had me on the edge of my seat.

Good fun, high adventure, and a sweet romance. Just right (especially at 4 am when I finished!) 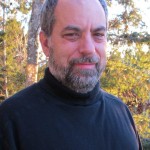