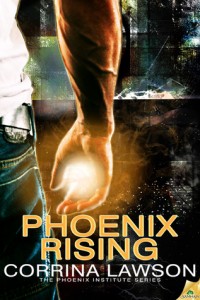 Since birth, Alec Farley has been trained to be a living weapon. His firestarter and telekinetic abilities have been honed to deadly perfection by the Resource, a shadowy anti-terrorist organization the only family he has ever known. What the Resource didn t teach him, though, is how to play well with others.

When psychologist Beth Nakamora meets Alec to help him work on his people skills, she s hit with a double-barreled first impression. He s hot in more ways than one. And her first instinct is to rescue him from his insular existence.

Her plan to kidnap and deprogram him goes awry when her latent telepathic ability flares, turning Alec s powers off. Hoping close proximity will reignite his flame, she leads him by the hand through a world he s never known. And something else flares: Alec s anger over everything he s been denied. Especially the passion that melds his mind and body with hers.

The Resource, however, isn t going to let anything or anyone steal its prime investment. Alec needs to be reminded where his loyalties lie starting with breaking his trust in the woman he s come to love.

Phoenix Rising is a fairly popular title. I mean that literally, there are a slew of books with the title “Phoenix Rising”. The first time I thought I was reading this book, I discovered after I finished that I had read the wrong book titled Phoenix Rising. (It was still good. And also steampunk, so somewhat germane).

The Phoenix Rising by Corrina Lawson is a “making of the superhero” book, especially if you parse that word as “super” and “hero”. Alec Farley was born a powerful telekinetic with the ability to control fire. He doesn’t just start fires, he can also stop them and direct them. It is an extension of his TK, he just makes the molecules move faster and faster, until they burn.

At the beginning of the story, while Alec may be super, he isn’t a hero. It’s not that he’s a villain (there is one in the story) but that he isn’t in control of his own life enough to be a hero for anyone else.

There is an element of Pinocchio becoming a real boy (a real man, Alec is 23). Alec is being manipulated and controlled by his foster father Richard Lansing, who is very definitely the villain of the piece.

Alec just thinks of Lansing as someone who plays mind games, without realizing that a big part of those mind games is controlling Alec’s entire life and convincing him that it is for his own good. Lansing has a contract with the CIA to investigate powers like Alec’s, and quite a few government military contracts to use Alec and his team of excellent ex-military soldiers to fight terrorism and criminals that need Alec’s special gift. Alec doesn’t realize that his team are also his minders.

Until Beth Nakamora enters his life. Beth is a counselor for troubled teens, particularly those with anger-management issues. The difference with Alec is that if he loses control of his temper, he also loses control of his fire. The CIA is worried that Alec is on the road to causing more collateral damage than any of his ops repair or prevent actual damage.

But Beth has a secret. Beth has several secrets, but her biggest secret is that Beth also has a gift – she is a telepath. However, her power is suppressed as a result of an extreme childhood trauma. Her other secret? Her foster father is a CIA agent who manipulated his contacts to get Beth assigned to work with Alec, because he knows Richard Lansing is keeping Alec a virtual prisoner, even if Alec doesn’t know enough about real life to figure that out.

Putting Beth together with Alec turns out to be explosive, in more ways than one. They have off-the-charts sexual chemistry, something that neither of them is quite prepared to deal with. Alec has some experience of sex, but none of real relationships. And Beth is too scared of revealing her secrets to have let many people into her life.

Their chemistry is explosive in another way – something about Beth’s telepathy amps up Alec’s power, and vice versa.

But the real explosion is the dismantling of all the secrets surrounding Alec’s life and his manipulation by Lansing. As Alec starts to see, not just what he’s been missing, but what an adult life is supposed to be, Lansing turns up the screws on Alec, Beth, and Beth’s mysterious foster father, Philip Drake.

Lansing is playing for ultimate power at any cost, and he won’t let anyone stand in his way – not even his sons.

Escape Rating A-: Phoenix Rising reminded me quite a lot of the X-Men movies. Phoenix Rising would be roughly equivalent to the story of the start of Professor Xavier’s Academy, but with Xavier as a firestarter instead of a telepath. There’s definitely that sense of the creation of the Phoenix Institute out of the ashes of “The Resource” in order for Alec to have the opportunity to give people like him a better start than he had.

Also the universes have a similarity in that so far, the gifted are born and not made in laboratories. There is some genetic engineering going on, but even that starts with at least one, or possibly two, parents with gifts. Also one of the gifted is 200 years old, born in a time when the genetic engineering necessary to produce a “super” from not much would have been pure fiction.

As an origin story for the Institute and Alec, it works very well.

One of the fascinating subplots is the relationship between fathers and their children, and how that can go both wrong and right, whether the children are born to the one who parents them, or whether that responsibility is taken on voluntarily.

In this particular circle of life, we have four people with gifts; Richard Lansing, Philip Drake, Alec Farley and Beth Nakamora. Lansing is a self-healer, and he’s over 200 years old and has gone nutso. He’s convinced that he is a superior being, and that superior beings should rule the world, under his direction, of course. He also has a large dose of Victorian era “white man’s burden” imperial racism just to make him even more intolerant (and intolerable).

Philip Drake is Lansing’s biological son, but Lansing rejected him because his mother was part Native American. It wasn’t until after Drake reached adulthood that Lansing discovered Drake had inherited his gift for self-healing. But they couldn’t come to terms because Lansing couldn’t get past his racism.

On the other hand, Lansing adopted Alec Farley and raised the firestarter as his son. He was a distant, manipulative and emotionally abusive father, but he actually did his best. It just wasn’t very good in the nurturing sense. Lansing raised Alec to be a living weapon, and it is a testament to Alec’s innate good nature that Lansing failed.

There’s a third hand in this one. Beth Nakamura is Drake’s foster daughter. He rescued her from a lab when she was 8, and he’s watched over her ever since. Now that Beth is 23, their relationship has changed a bit, but it is obvious in every scene they have together that they love each other and would do anything for each other. Even though Drake is not Beth’s biological father, he is her real father in a way that Lansing never was to him or Alec. Drake learned from Lansing, as well as from an abusive step-father, what not to do. So he did the opposite and raised a marvelous woman who is definitely her own person.

Phoenix Rising also lays the groundwork for the worldbuilding in this series, and it does an excellent job while still telling a heart-pounding adventure with a sweet, sexy romance.