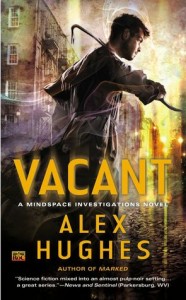 Nothing ruins a romantic evening like a brawl with lowlifes—especially when one of them later turns up dead and my date, Detective Isabella Cherabino, is the #1 suspect. My history with the Atlanta PD on both sides of the law makes me an unreliable witness, so while Cherabino is suspended, I’m paying my bills by taking an FBI gig.

I’ve been hired to play telepathic bodyguard for Tommy, the ten-year-old son of a superior court judge in Savannah presiding over the murder trial of a mob-connected mogul. After an attempt on the kid’s life, the Feds believe he’s been targeted by the businessman’s “associates.”

Turns out, Tommy’s a nascent telepath, so I’m trying to help him get a handle on his Ability. But it doesn’t take a mind reader to see that there’s something going on with this kid’s parents that’s stressing him out more than a death threat…

Alex Hughes’ Mindspace Investigations is a series that absolutely requires starting at the very beginning. (This seems to be my week for that.) If the idea of an urban fantasy series that reads like a marvelously twisted cross between Jim Butcher’s Dresden Files and J.D. Robb’s In Death series, you’ve come to the right place.

Like so many of the titles in this series, that word, Vacant, is a multiple entendre. It refers to Isabella Cherabino’s career, Adam Ward’s ethics, and the office they come to at the end of the story. Possibly also to any threads of a future that Adam might have, but we’ll see.

The cases that Adam and Isabella have to solve in the present are very much tied in with a larger conspiracy that they uncovered in the earlier stories. But even though that possibility is fairly clear to the reader, it is only a vague hint on the horizon for Adam, and not at all on Isabella’s radar.

That separation nearly wrecks his extremely slowly developing relationship with Isabella Cherabino. More importantly, it nearly wrecks him. But he comes out stronger for it, albeit with a few more broken places. The difference is that he is not filling those broken places in with drugs. At least not today.

Isabella is charged with police brutality, and becomes the county’s poster child for non-tolerance of such a crime. The only problem is that she didn’t do it, and both the evidence and the hearing are rigged. The question that is asked throughout the story, and only answered by the end, is that of the rigger.

Adam is off in Savannah, chasing down a precognitive vision with the help of the FBI, although they consider that he is helping them. A child will die if Adam can’t figure out how to subvert the vision before it is too late. In order to derail the vision, he also needs to figure out what a judge in a high-profile case is hiding, and who benefits from killing her child.

And what does any of this have to do with actions in Adam’s past? In the end, it is all about him. And not in a good way. Saving that kid may not fix any of the other things that Adam has broken, but it will be enough to make today worthwhile. It gives him yet one more reason to remain clean.

But some of his screwups still catch up with him. Payment will be demanded, but not all of it today.

Escape Rating A: The world of Mindspace Investigations is a very dark and gritty one. While it seems that things are getting better after the chaos of the Tech Wars, it’s going to be a long, hard time until society gets back to where it is in our now. The levels of pollution in the air and water are a factor that Adam is constantly aware of on his trip to Savannah, and so are we.

What is different about this case is that Adam is operating completely solo. While the series has been told from his first-person perspective from the very beginning, we are always aware of Adam’s nearby support group; especially his police partner Isabella Cherabino and his NA sponsor Swartz.

In Savannah Adam is forced to work with an FBI team that he has never met, and one that resents the need to bring in an unknown teep on an emergency basis when theirs is injured. Adam is there to save a 10-year-old boy’s life, and the FBI team is there to prevent a second kidnapping attempt on that same boy.

Adam is also there because the Telepath Guild is yanking his chain, but that’s nothing new. One of the ongoing themes of the series is that Adam wants to distance himself as much as possible from the Telepath Guild, but he keeps getting sucked back in. It is very convenient for everyone, the police, the FBI, the Guild themselves, to have a telepath whose loyalties seem somewhat fluid.

They aren’t, and that’s what keeps getting him into trouble. Although in this story that same sense of loyalty also keeps him out of trouble. Just a bit.

In addition to the harrowing case that Adam is investigating, what we see is him learning to stand on his own again. The question, as always, is for how long.

While the events in this particular story had a lot to do with previous cases, there was also a sense that the events in this book have pushed the story into a different direction. After the bombshell at the end, I’m on pins and needles waiting to see what happens next.

Reviewer’s note: When I began this series, part of the fun for me was that I used to live in the Atlanta metro area where this series is set. As I write this, I am moving back to the Atlanta area. It made reading about the places involved that much more fascinating for me. I could see it, I have seen it, and I’m going to see it again.

Alex is giving away an ebook copy of the winner’s choice of one Mindspace Investigations novel (INT). To enter, use the Rafflecopter below:

Alex is also conducting a scavenger hunt based on the game CLUE. Here is the clue for this stop on the blog tour: 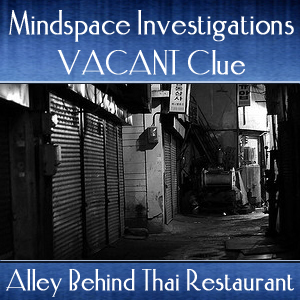 So you can cross this clue off your checklist. For more details on how you can use this clue to get the grand prize of a $25 gift card to Barnes & Noble, a signed copy of Marked, and a character from a future book named after him/her., visit this page that explains the contest and tells you where to find the other clues.

8 thoughts on “Review: Vacant by Alex Hughes (+ a giveaway and a scavenger hunt)”