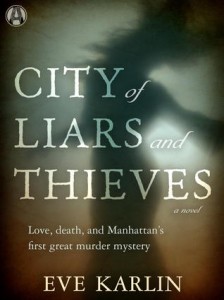 A crime that rocked a city. A case that stunned a nation. Based on the United States’ first recorded murder trial, Eve Karlin’s spellbinding debut novel re-creates early nineteenth-century New York City, where a love affair ends in a brutal murder and a conspiracy involving Alexander Hamilton and Aaron Burr erupts in shattering violence.

It is high time to tell the truth. Time for justice. . . . How she was murdered and why she haunts me. It is not only Elma’s story, it’s mine.

On the bustling docks of the Hudson River, Catherine Ring waits with her husband and children for the ship carrying her cousin, Elma Sands. Their Greenwich Street boardinghouse becomes a haven for Elma, who has at last escaped the stifling confines of her small hometown and the shameful circumstances of her birth. But in the summer of 1799, Manhattan remains a teeming cesspool of stagnant swamps and polluted rivers. The city is desperate for clean water as fires wreak devastation and the death toll from yellow fever surges.

Political tensions are rising, too. It’s an election year, and Alexander Hamilton is hungry for power. So is his rival, Aaron Burr, who has announced the formation of the Manhattan Water Company. But their private struggle becomes very public when the body of Elma Sands is found at the bottom of a city well built by Burr’s company.

Resolved to see justice done, Catherine becomes both witness and avenger. She soon finds, however, that the shocking truth behind this trial has nothing to do with guilt or innocence.

This novel gets off to a slow start but comes to a slam-bang finish. It has the feel of both history and suspense, because it is both.

Elma Sands, the victim in this case, was a real person. The place where her body was found still exists in a New York City basement. I’m not sure which gave me more chills, the description of her short and tragic life and horrific death, or the author’s afterword describing her visit to the site.

City of Liars and Thieves is a story that proves that the more things change, the more they remain the same.

The story, and the case, center around the first publicized murder trial in New York. And it displays all the facets of the “blindness” of justice, or the lack thereof, that we still expect to see in contemporary sensationalized trials.

Elma Sands was a young woman whose body was found in a well in Manhattan, in what will someday become Soho. But in 1800, Manhattan is a fast growing city with a desperate need for fresh water. “Water, water everywhere and not a drop to drink” could easily describe the situation. Surrounded by salt water, there is nowhere near enough fresh water for the people who live there. A situation made even worse by the lack of sanitation practices at the time.

Elma lives with her cousin Catherine Ring in a boardinghouse owned by Ring and her husband Elias. Elma is a young woman who has shown some questionable judgment back in her small home town of Cornwall, NY, and Caty hopes her cousin can get a fresh start in the larger city. Also, she just plain misses her.

Instead, Elma’s faults drop her into an early grave, as a warning to anyone who would get in the way of much bigger plans by much more important people than Elma (or Catherine) ever expected.

The water company was a complete sham. It was a way of roping investors into a scheme that was bound to fail, but folded their money into the bank in such a way that the investors lost their shirts.

Elma made the mistake of telling one of the founders that she would expose him, based on pillow talk with his brother. Instead, she ended up in the bottom of a dry well, and the trial of her supposed murderer ended up as part of Burr and Hamilton’s presidential campaigns.

And the killer, beneficiary of his brother’s money and influence, got off scot-free. Or did he?

Escape Rating B: This story takes a while to set up, because there are so many historical factors in play. Caty and Elma’s relationship, Caty’s husband and their move to Manhattan, and finally, Elma coming to Manhattan already in the relationship that would eventually get her killed.

The stage also has to be set to show the continuing water crisis in Manhattan. We think of New York City as a place of abundance, both of wealth and material goods. Manhattan is the banking center of the city. But in Elma and Caty’s time, Wall Street was still mostly mud. The colonies as a whole had only been free for a quarter-century. This was a time when the U.S. was still more frontier than civilization.

Caty Ring is used as the point of view character. On the one hand, she survived, so she lives to tell the tale (and apparently did in real life). On the other hand, we are restricted to what Caty knows and does, or is reported to her. She is not privy to discussions with Burr and Hamilton, because in 1800 those gatherings were restricted to men. Her husband does not treat her as an equal partner, because he has myriad secrets of his own. In the dark, Caty forms her own conclusions about Elma’s actions and eventual death. Many of those conclusions turn out to be erroneous, both because Caty naively believed the best of people who obviously did not deserve it, and because she drowns in her grief as surely as Elma drowned in that well.

The suspense in this story, and the point where it starts moving at terrific speed, is when the accused murderer is brought to trial. The way that trials were conducted is both different and the same. The jury has to sleep at the courthouse, on the floor, until the trial is over and the verdict is rendered. The judge makes his bias obvious from the beginning of the case, and the amount of perjury condoned is jaw-dropping.

But the verdict in the end is the one that we expect. Money decides the case, and much of the reporting follows the accepted version rather than search for the truth. In the end, Elma’s virtue is on trial much more than her killer’s guilt or innocence.

And that is all too familiar.

p.s. Even if you don’t normally read the author’s afterward in a book, read this one. It’s even more chilling than the story.

This tour includes a Rafflecopter giveaway for a $25 gift card to the eBook Retailer of the winner’s choice + a copy of the book! The giveaway runs until midnight of the last day of the tour, which in this case is January 30th. Enter below.

2 thoughts on “Review: City of Liars and Thieves by Eve Karlin + Giveaway”