Today I’m very pleased to welcome Blair McDowell back to Reading Reality. Her most recent book, Romantic Road (reviewed here) was absolutely awesome. Actually, I think all of her books have been marvelous. I first discovered Blair’s work when I reviewed Delighting In Your Company back in 2012. I’ve eagerly awaited every new book, because she writes marvelous love stories with interesting twists and fascinating backgrounds. Every story has lots of lovely layers to immerse yourself in. 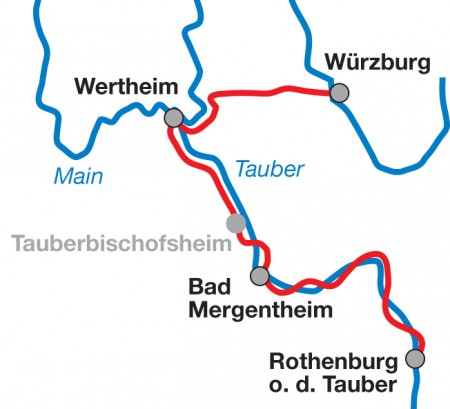 It was quite by accident that I first discovered the Romantische Strasse, an ancient Roman road that winds through picturesque old walled towns, from Wurzburg to Augsburg in Germany. I had flown into Frankfurt on my way to Budapest for a meeting. With some days to spare, I decided to rent a car at the airport in Frankfurt and drive to my destination in Hungary. 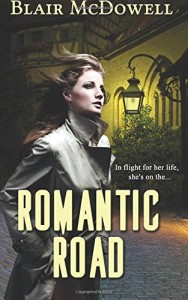 What I hadn’t counted on was the German autobahn. I realized within the first half hour on this raceway that I was no match for German drivers. I had rented the smallest and cheapest car available, and I was surrounded by Mercedes and BMWs all traveling at the speed of light. Driving at about seventy miles an hour, I was in mortal danger. Not content with merely passing me, drivers pulled up to about three inches behind me and madly flick their high beams. Since I was already in the far right lane I’m not sure where they expected me to pull over. In full blown terror I looked for a way out. When I saw a sign saying “Miltenberg” I took the exit. Within a few minutes I was in a peaceful countryside, on a meandering two lane road, with almost nobody on it but me. An hour or so later, I was on the outskirts of a walled medieval town on the River Main. Exhausted by both a sleepless overnight flight and my hair-raising autobahn experience I decided to spend the night there. 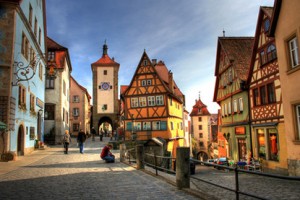 I parked my car outside the walls and walked through a huge stone archway into a setting that might have come out of Grimm’s fairy tales. Cobblestone streets, ancient houses huddled close together, and best of all, no cars. I checked into the Zum Riesen, an inn so old I had to duck to get through doorways. People were shorter in the fifteenth century.

The bed was heaven; I sank into oblivion with a huge square down pillow under my head and a plump down duvet over the rest of me.
In the morning, as I enjoyed my breakfast of black bread, ham and cheese, and strong black coffee, the proprietor said to me, “You’re traveling our Romantische Strasse, then?

That’s how, quite by accident, I discovered the Romantic Road. 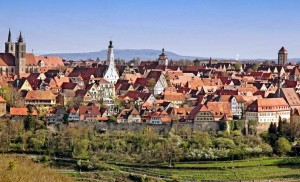 The three medieval towns that officially make up the Romantische Strasse are Nördlingen, Dinkelsbuhl, and Rothenburg ob der Tauber. The one that stayed most in my mind after exploring this part of southern Germany was Rothenburg. Surrounded by high stone walls interspersed with vast arched gates, it is a reminder of how perilous life must have been six hundred years ago. Tall houses stand huddled close together. From a small park, I could see the surrounding hilly countryside for miles ­- an advantageous position for a fortress town that had to be ready at a moment’s notice to close its gates and defend itself from attack.

The town center was a wide square with a clock tower, a town hall, and a gate chillingly named the Hangman’s Gate. It was evocative of a distant and dangerous time, especially when seen on a chilly, rainy March day, as I first saw it. 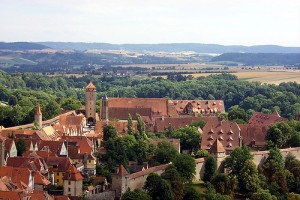 I returned to the Romantische Strasse many times over the ensuing years. I knew that someday I would have to bring a story to this setting. It was in Rothenberg that the plot of Romantic Road began to take shape. A heroine, I didn’t yet know her name, would take refuge here, pursued by someone who meant her harm. The title, I decided, would be double-entendre, reflecting both the old Roman road with the medieval towns on it, and the personal romantic road of my heroine’s life.

This was the kernel from which my novel of romantic suspense, Romantic Road, grew. 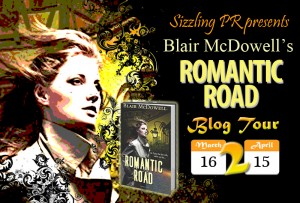 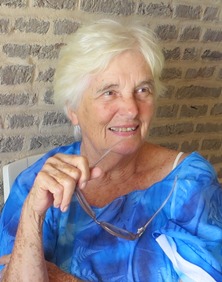 Blair McDowell wrote her first short story when she was eleven and has never ceased writing since, although only recently has she been able to return to her first love, writing fiction.  During her early years, she taught in universities in the United States, Canada and Australia, and wrote several highly successful books in her field.Her research has taken her to many interesting places.  She has lived in Europe, Australia, the United States and the Caribbean and Canada, and spent considerable time in still other places, Iceland, the Far East, and the Torres Strait Islands off the coast of New Guinea. Now she travels for pleasure. Portugal, Greece and Italy are favorite haunts.

Her books are set in places she knows and loves and are peopled with characters drawn from her experiences of those places.   The Memory of Roses takes readers to the Greek Island of Corfu, where a young woman finds her future while searching for her father’s past.  In Delighting in Your Company, the reader is transported to a small island in the Caribbean, with a heroine who finds herself in the unenviable position of falling in love with a ghost.  The setting for Sonata is the city of Vancouver, with its vibrant multicultural population and its rich musical life, and the heroine is a musician who finds herself in unexpected danger.

In her most recent release, Romantic Road, Lacy Telchev, is pursued along Germany’s famous Romantische Strausse as she follows clues left by her late husband in order to solve a mystery that she doesn’t understand, while being chased by dangerous and cunning adversaries.

Blair is giving away two e-copies of Romantic Road! For a chance to win, enter the Rafflecopter below.