If the phrase “delighting in your company” sounds familiar, it should. It’s from one of the most persistent ballads in the English language. Still stumped? 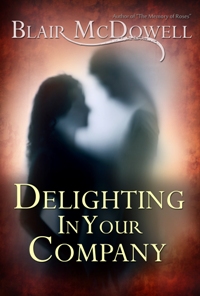 And the story, Delighting in Your Company, uses the tune and the words, as it is one song that is familiar to people in both the 19th and 21st centuries.

That’s important, because Blair McDowell has created a ghost story and a time-travel story that links people and events between those two centuries.

Ms McDowell interweaves the history and beliefs of the Caribbean, a stinging rebuke against the “Triangle Trade” of the 17th and 18th centuries, and a bittersweet love story that changes history. Because history needed a “cosmic kick in the pants”.

But first, the heroine needs a more localized one. Amalie Ansett’s life needs a do-over. Or at least a fresh start. Her marriage has ended in bitter divorce, and her beloved mother is dead. While packing her her childhood home, she discovers a family secret–the good kind for a change. She has family she never knew about. A cousin in the Caribbean, on the laid-back island of St. Clement’s.

One delighted phone call, and Amalie is taking a much-needed rest on a sleepy tropical island where the pace is life is slow, and time has a chance to heal her.

Long ago, there was another Amalie Ansett. Her portrait hangs in the museum. And she’s a dead-ringer for 21st century Amalie. There’s something else dead about historic Amalie. Her eyes. They’re empty. Not just in the sense that the portrait was bad, but as though the artist painted her corpse.

He did. History-Amalie was catatonic while she was painted, while she was the governor’s wife. There’s a big mystery about her death. And Amalie’s cousin Julia knows it. Something went very wrong back there in the past.

Because that man Amalie has met in the here-and-now? He’s a ghost. Everyone on the island knows something haunts the old Ansett and Evans Plantations, and it’s him. Jonathan Evans. The man the original Amalie was supposed to marry.

Instead there was a slave rebellion, and history went way, way, way off track. Jonathan’s ghost thinks his Amalie has come back to him. Amalie thinks that her handsome ghost-man is using her as a substitute for the woman he really loves.

But he’s real enough to her that they manage pretty well. Until Amalie investigates that rebellion-and figures out that she might be able to go back and fix things. But if she makes things right, she’ll lose the man she loves.

Love is about making the one you love happy, not yourself, isn’t it? No matter how much it hurts?

Escape Rating A-: Usually it’s either the ghost story or the time-travel story. This time it’s both, and it SO works. Amalie has to meet the ghost of Jonathan in order to know she’s supposed to go back and fix things. And yes, it might be a little arrogant to think she’s the one who has to fix the past, but who else?

The story works on a lot of levels, the love story because Amalie knows it can’t last, but does it anyway. She’s always trying to make things right for Jonathan, aware that it’s a sacrifice for the greater good. But it only works when she builds trust with people in both the present and the past, especially her past self. That was fascinating.

The time travel angle works because Amalie goes back to herself. She’s not trying to create a new role, she’s already there. She works with what is.

The historic mystery has its roots in the Triangle Trade, and the money to be made there. Not just the slave trade itself, but also the sales of the cash crop from the Caribbean that the slaves produced. If you’re curious about the Triangle Trade, the best, and most colorful description is still the song “Molasses to Rum to Slaves” from the musical 1776. It indicts everyone involved.

5 thoughts on “Delighting In Your Company”