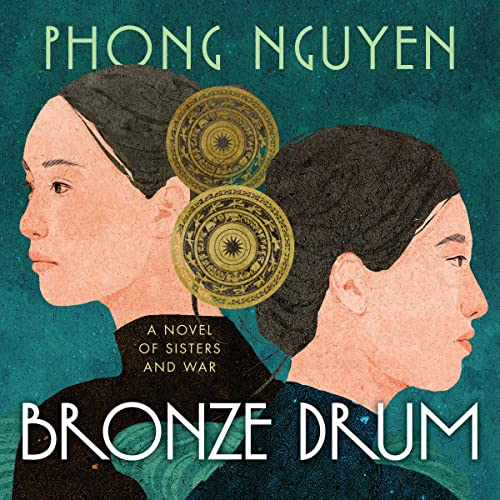 A stunning novel of ancient Vietnam based on the true story of two warrior sisters who raised an army of women to overthrow the Han Chinese and rule as kings over a united people, for readers of Circe and The Night Tiger.
Gather around, children of Chu Dien, and be brave.For even to listen to the story of the Trung Sisters is,in these troubled times, a dangerous act.
In 40 CE, in the Au Lac region of ancient Vietnam, two daughters of a Vietnamese Lord fill their days training, studying, and trying to stay true to Vietnamese traditions. While Trung Trac is disciplined and wise, always excelling in her duty, Trung Nhi is fierce and free spirited, more concerned with spending time in the gardens and with lovers.
But these sister's lives—and the lives of their people—are shadowed by the oppressive rule of the Han Chinese. They are forced to adopt Confucian teachings, secure marriages, and pay ever‑increasing taxes. As the peoples' frustration boils over, the country comes ever closer to the edge of war.

“It is not enough to win a war; it is more important to organize the peace.” Or so said the Greek philosopher Aristotle in the 4th century BCE. As many lessons in both military history, leadership and philosophy that we see the Trưng sisters attend in the first half of this story, it’s a lesson that they failed to learn if they heard it or the equivalent in the philosophers that they did study in 1st century CE Vietnam.

The Trưng sisters, Trưng Trắc and Trưng Nhị, were the daughters of one of the Vietnamese lords who ruled their provinces under the oppressive thumb of the Han Chinese during the first Chinese domination of Vietnam. A domination that was ended, however briefly, by the Trưng sisters’ rebellion.

So the bones of this story really happened. Including the smelting of the bronze drums that that rebellion had used so very successfully in the overthrow of their oppressors.

But 2,000 years is a long time ago, especially in the history of a people that has been conquered and subjugated, divided and reunited, over and over again. And that’s where this historical fiction account of the only queen regnant in Vietnamese history comes in.

And what a story it is!

Escape Rating B: I had two separate and distinct reactions to Bronze Drum. I was being told a story (literally as I listened to the audiobook) in a historical tradition with which I was completely unfamiliar. And that history, the history of the Trưng sisters rebellion, its causes and its ultimate failure, was fascinating. Not just because it was new to me, but because it’s a story of a women-led uprising at a point in history where we don’t expect such things to have happened at all.

But I had a separate reaction to the story as it was being told, to the narrative progress of the fictionalized version I was listening to. And I was a bit less fascinated with how the story worked as opposed to the history that inspired it.

The story begins with the Trưng sisters as very young women, and the story of their early years takes up the first half of the book. While the reader – or certainly this reader – needs an introduction to their society at that point in time, this part of the story dragged in the telling of it. They are sisters, they fight a lot, the younger resents the elder, is rebellious and misbehaves, and not much happens in the grand scheme of things.

It’s only in the second half that the pace picks up. As the immediate reasons for the rebellion start piling up – literally as in bodies stacked like cordwood – we start reaching the events that really matter. The women of Vietnam rise up and overthrow the oppressive Han regime, through training and teamwork and an indomitable will. It’s exciting and it grabs the reader’s attention and doesn’t let go.

And I think this would have been a better story if it had focused there instead of the long, drawn out recounting of their earlier years. Your reading mileage, of course, may vary.

About the audiobook…Bronze Drum is a book that I listened to in its entirety. I did try switching to the text but the way that the names are pronounced and the way that they are transliterated from the Vietnamese into the English alphabet are markedly different. Enough to make switching between the two difficult for someone who isn’t familiar with the language. (While I recognize that this is a “me” problem, if it’s also potentially a “you” problem it’s something to keep in mind.)

A lot of the books I listen to as opposed to reading are from first-person perspectives. I find those particularly well suited to audiobooks as I really get the experience of being inside the narrator’s head. Bronze Drum is in the third person, and there is a lot more narration of that third person overview than there is either dialog or internal thoughts. Narration is, of necessity, at a bit of a remove, and as a consequence the narration of this book is dispassionate to the point of being a bit flat, making the audio experience a bit of a mixed bag as well as the story. The listening experience was much closer to that of an unvoiced (un-acted) narration and that’s not what I listen to audiobooks for.

One final note. In the way that the story is told, Bronze Drum reminds me a LOT of Kaikeyi. And not just because both stories are in traditions that I was not familiar with. Both stories spend a lot of time on that portrait of the protagonist as a young girl, when they are not able to fully participate in the important events around them or yet to come. And both are stories of women taking prominent places in men’s stories and in a man’s world at a time and place where that was not expected. The major difference, at least to this reader, is that Kaikeyi puts a female perspective and a feminist interpretation on a myth, while Bronze Drum is a feminist history that really happened.

One thought on “Review: Bronze Drum by Phong Nguyen”