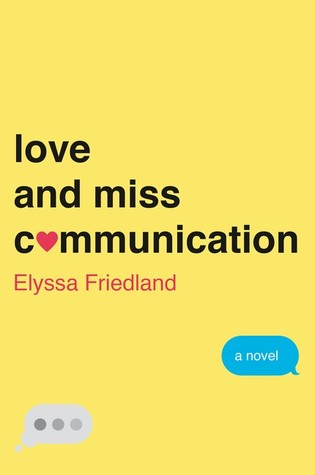 This unforgettable debut novel asks us to look up from our screens and out at the world…and to imagine what life would be like with no searches, no status updates, no texts, no Tweets, no pins, and no posts

Evie Rosen has had enough. She’s tired of the partners at her law firm e-mailing her at all hours of the night. The thought of another online date makes her break out in a cold sweat. She’s over the clever hashtags and the endless selfies. So when her career hits a surprising roadblock and her heart is crushed by Facebook, Evie decides it’s time to put down her smartphone for good. (Beats stowing it in her underwear–she’s done that too!)

And that’s when she discovers a fresh start for real conversations, fewer distractions, and living in the moment, even if the moments are heartbreakingly difficult. Babies are born; marriages teeter; friendships are tested. Evie just may find love and a new direction when she least expects it, but she also learns that just because you unplug your phone doesn’t mean you can unplug from life.

Love and Miss Communication is an adorable fluffy, downy chick of a chick lit story, mixed with some multi-generational women’s fiction backbone and a loving but slightly stereotypical dose of Jewish grandmother guilt complex.

There’s also some interesting commentary on the fulfillment, or lack thereof, in our 24/7 always connected, always available technologically driven lives in the 21st century.

Evie Rosen starts out the story addicted to the internet, and it is not making her happy or fulfilled. Instead, it makes her discontented and consistently lowers her self-esteem at every turn.

It also gets her fired.

We all forget that our employers have the right to monitor anything we do on company computers and/or company equipment. Like Evie, for many of us, our jobs are who we are.

Evie is a senior associate attorney at a “white shoe” law firm in New York. She expects to make partner. She’s earned it, devoting all of her waking hours to her job and neglecting her friends, her family and herself in the process.

Instead, she is fired. She’s a great attorney, but she is also the company’s single biggest user of the company internet for personal business. She constantly checks Facebook to find out who is doing better than she is, and she Googles everyone she meets.

She’s obsessive. She’s so obsessive that when she Googles her famous chef ex-boyfriend to find out what he’s up to now, she discovers that the man who said he didn’t believe in marriage has, in fact, gotten married.

Barfing all over her laptop is the last straw. Google-induced vomiting destroys her computer. And after a few hours searching New York for a safe place to log on, Evie finally decides that enough is enough. It’s time to stop living vicariously through her computer and start living in real time. With real places and real people.

Of course, she goes a bit too far the other way, but that’s Evie – obsessive and compulsive about it.

While her friends and family are busily exchanging emails and evites and unthinkingly leaving her out, Evie has to deal with a family crisis. Her beloved grandmother Bette, who has equally obsessively been pushing Evie to find a husband and get married, is diagnosed with breast cancer. Evie is forced to deal with the fact that her time with her grandmother is finite, and possibly ending even sooner than she hoped.

Little does Evie know that her grandmother is using her very real and very scary diagnosis to make one last effort to get Evie’s head out of her own ass and recognize that there is someone out there for her – if only she can be herself long enough to make a real connection – without the false expectations raised by technology to steer her wrong.

Escape Rating B: I liked Evie a lot. It’s easy to sympathize with her desire to disconnect. Technology is ubiquitous and its ability to create and foster tiny niches is separating us from each other. And it is SO easy to get obsessed chasing every connection and driving ourselves crazy that everyone else seems to be doing so much better than we are.

And Evie’s “aha” moment over the keyboard was epically tragicomic.

But the cultural markers that define Bette, her use of Yiddish in an attempt to weed out the goyim, the extreme way that she wields guilt, all seem as if they belong to an earlier generation. Bette acts and sounds like someone from my own grandmother’s generation, but I’m more contemporary with Evie’s mother.

The guilt-tripping Jewish mother/grandmother is a stereotype that while funny and even endearing for those of us who had one, seems a bit dated. While it is true that in this story, Evie would be happier if she found the right person, the drumbeat that she must at all costs gets a bit wearing.

What was more interesting was Evie’s internal conflict, that she always wants what she can’t have, to the point where it almost costs her what she really wants. Again, she has an “aha” moment that is slightly tragic and slightly funny, and also nearly results in more vomit.

Evie is person who lost someone important to her, her father, at a relatively young age, and is afraid to let herself love again out of fear that she will lose again. So she keeps fixing herself on the unattainable, in the impossible hope that she won’t get hurt again. Except that she does, and she hurts herself most of all.

When she finally gets it all together, it’s cathartic both for Evie and for the reader. But after Evie’s life balancing and society rejecting year of eschewing technology for real connections, I wish that her happiness had embraced some elements that weren’t totally traditional.

Which does not mean that I didn’t enjoy following Evie’s journey to her authentic happiness. Because I certainly did.

The publisher is graciously providing one copy of Love and Miss Communication to one lucky winner. To enter, just fill out the Rafflecopter below.