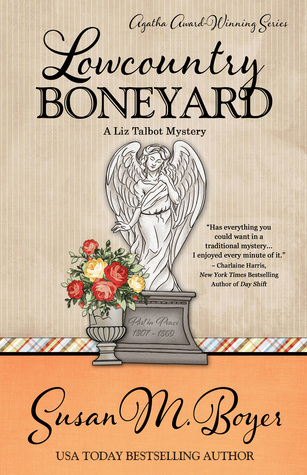 Where is Kent Heyward? The twenty-three-year-old heiress from one of Charleston’s oldest families vanished a month ago. When her father hires private investigator Liz Talbot, Liz suspects the most difficult part of her job will be convincing the patriarch his daughter tired of his overbearing nature and left town. That’s what the Charleston Police Department believes.

But behind the garden walls South of Broad, family secrets pop up like weeds in the azaleas. The neighbors recollect violent arguments between Kent and her parents. Eccentric twin uncles and a gaggle of cousins covet the family fortune. And the lingering spirit of a Civil-War-era debutante may know something if Colleen, Liz’s dead best friend, can get her to talk.

Liz juggles her case, the partner she’s in love with, and the family she adores. But the closer she gets to what has become of Kent, the closer Liz dances to her own grave.

It’s possible to call this series “paranormal mysteries” but they really are contemporary mysteries with one important paranormal element.

Liz Talbot sees ghost. Not plural, singular. The only ghost she sees is her late (14 years late and counting) and much lamented best friend Colleen.

But while Liz has grown up and almost moved on in the intervening years, Colleen remains 17, and says that she is the spirit guardian of Liz’ home island of Stella Maris. Colleen is visible, and very definitely audible, to Liz because who or whatever the powers-that-be are believe that Liz’ presence back on Stella Maris and its town council are the best chance for the island to remain the relatively pristine hideaway it has always been.

But Liz has a problem. Her long-distance relationship with her business and romantic partner Nate is starting to run into rocky shoals. Nate wants them to at least split their time between the company’s, and his, home base in Greenville and Liz’ home and extended family on Stella Maris.

He can’t know just how many times Colleen has intervened to save Liz’ (and his) lives so as to help maintain that status quo, or that Liz will lose Colleen’s protection if she leaves the island and gives up her council seat.

Liz and Colleen are trying to find a compromise, while Nate is increasingly frustrated and unhappy with the situation. It doesn’t help that Nate knows all too much about Liz’ love life. She left Stella Maris to marry his bastard of a brother, and stayed away because her first love was on Stella Maris and unhappily married to her own cousin.

Nate figures that if she could pick where she lived based on who she loved before, she must not love him as much if she won’t at least compromise on Greenville for him. While we can all agree that his thinking is a bit skewed, or screwed, it is very, very human.

Meanwhile, they have a case in Charleston, one that is much bigger and more dangerous than either of them expected. A rich, young woman has been missing for a month, and no one has been able to find a clue concerning her whereabouts. Her family is one of the founding families of the city, but she is 23 and without evidence, the police can’t help but think that her disappearance was voluntary.

No one on the Charleston P.D. is very happy when Liz starts turning up clues that they missed, along with a tangled web of classism, elitism, and family secrets.

Not all of them her own.

Kent Heyward, the missing heiress, is heir to two of Charleston’s great family fortunes. Her family, especially her powerful grandparents, are all too used to getting their own way in every single thing. While they close ranks and protect their secrets, they seem to think they are so powerful that none of their secrets will ever get out, or that they will be able to completely suppress those secrets, by murder if necessary.

If only Kent really had run away. She would have been much better off with some other family, because her own family’s secrets have made her a target.

A lot of the nasty business in this story revolves around classism. The rich aren’t just different from you and me, but in this story, they think they are better. To the point where marrying outside the class is an excuse for kidnapping and murder. But it’s an old case that comes back to haunt them where it hurts the most.

As Liz investigates, its not so much whether she will uncover anything illegal, but rather how much she will uncover. And whether any of the people who have something to hide can afford to let her live, even if her death would leave Kent unfound and unmourned.

While she is investigating, Liz is also dealing with a personal crisis. She loves Nate, but she can’t leave Stella Maris. And she can’t tell him why. Nate’s reactions are not particularly adult or particularly sensible.

And in the background, there is Liz’ marvelous and slightly crazy family. Their deep roots on Stella Maris are sometimes a help, as is her brother the island Chief of Police, but dodging their attempts to protect her or take care of her often result in some crazy situations.

Her mother is hilarious in fiction, but I’ll admit would drive me nuts in a heartbeat.

The case that Liz is investigating has tons of twists and turns that keep the reader from figuring out both whodunnit and their motive for the entire way. Especially when the repeated attempts on Liz’ life intervene to confuse matters and motives.

I raced through this book to find out who, what and why, because I got so involved in the plot. Plots. Lots of bad people with lots of plots, some more successful than others. All wrapped up at the end with a lovely, but slightly bittersweet, happy ending.

Readers who like their heroines with smarts and brass and slightly zany friends and families will eat this series up like a slice of Key Lime Pie. Take your first bite with Lowcountry Boil (reviewed here) and enjoy!