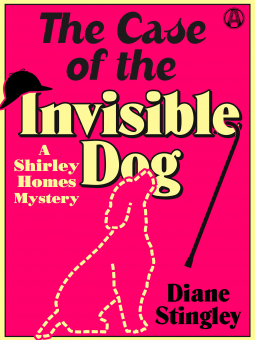 After failing to launch her career as a Hollywood actress, Tammy Norman returns home to North Carolina, desperate for a regular paycheck and a new lease on life. So she accepts a position assisting Shirley Homes, an exceptionally odd personage who styles herself after her celebrated “ancestor”–right down to the ridiculous hat. Tammy isn’t sure how long she can go on indulging the delusional Shirley (who honestly believes Sherlock Holmes was a real person!), but with the prospect of unemployment looming, she decides to give it a shot.

Tammy’s impression of her eccentric boss does not improve when their first case involves midnight romps through strangers’ yards in pursuit of a phantom dog—that only their client can hear. But when the case takes a sudden and sinister turn, Tammy has to admit that Shirley Homes might actually be on to something. . . .

Somewhere at the corner of quirky and delusional lives Shirley Homes and her questionable belief that she is the great-great-granddaughter of Sherlock Holmes – the fictionality of his existence notwithstanding. Of course, Shirley believes that he was real, because fictional characters don’t have children, let alone great-great-grandchildren.

Whether Shirley is eccentric or downright insane is up to the reader to judge. In her world, everyone seems to have decided that she is a couple of sandwiches short of a picnic. But is she?

The person most concerned about that question is Tamara Norman. Tammy has taken on the job of Shirley Homes’ assistant. While at first it seems as if the job consists of collecting a very nice paycheck for providing a presence that helps prop up Homes’ delusion, the situation changes when they get a real case.

Where Sherlock Holmes had “the curious incident of the dog in the nighttime” Shirley Homes has the case of the barking dog who isn’t there.

It’s pretty obvious that someone is gaslighting their client, Matt Peterman. As soon as he goes to sleep every night, he hears a dog barking outside. But when he gets up to look, the dog stops barking. And there is no dog.

What there is are some new and very smarmy neighbors, and a lot of vacant houses. It’s the depths of the Great Recession, in North Carolina and everywhere else, and Matt lives in a development that isn’t selling.

So why is this happening?

Tammy Norman thinks that Matt is just a lonely crank, until he turns up dead the day after he hires them. Whatever is going on with the ‘invisible dog’, someone wanted the man dead. But the reasons are obscure, and the local police are convinced that Shirley Homes is a complete nutter. Let’s just say the police interview didn’t go well, although by that point Tammy (and the readers) are all too aware that it went typically for any conversation with Shirley.

While Shirley is the catalyst for everything that happens, Tammy is the person who really sinks her teeth into the case, even though she doesn’t want to. She’s sure Shirley is harmlessly nuts, but starts feeling protective of her boss, even as she thinks that the woman needs a keeper and not an assistant.

Although the case reaches for more and deeper levels of ‘slightly out there’, at the same time there is still a case. Matt Peterman is still dead. His ex-wife is trying to grab whatever assets he might have had. Those smarmy neighbors watch every move that takes place in his house, and someone is cleaning up every scrap of evidence that Shirley and Tammy find as soon as they find it.

Tammy finds herself learning how to be a detective from possibly the worst teacher ever. But she can’t help getting involved and wanting to get to the bottom of the case.

As a former actress, Tammy finally hits paydirt when she follows the precepts of her favorite TV show – Law and Order. Tammy starts following the money. And digs up not just dirt, but also a powerful enemy who has been manipulating events in Shirley’s life from the very beginning.

Can there be a Holmes without a Moriarty?

Escape Rating B-: I’m pretty sure this is the quirkiest Sherlock Holmes spin-off I’ve ever read, and I’ve read some dillies. This one takes the prize.

You’re never sure whether Shirley Homes is delusional or telling the truth. It’s not just that her contention that she is a descendant of the original Holmes is impossible because he was fictional, but even he was real, her portrayal isn’t Holmes, it’s a caricature of Holmes.

Holmes used every scrap of technology available to him at the time. Not because he worshiped technology, but because it was efficient and effective. A modern-day version would have adapted, not attempted to slavishly adhere to 19th century practices as much as possible. For example, Holmes often found cases by combing through the personal ads and agony columns in the newspaper. Today, most of that information and angst is in social media.

However, the parallels are striking. The detective isn’t just “Shirley Homes”, but her sister Myra bears a striking resemblance to Mycroft. And there appears to be a Moriarty, the question is who?

There is someone who seems to have the agenda of spying on Homes at every turn, even pretending to be a psychiatrist in order to pump Tammy for information. And she’s not the only contender for the position of Moriarty. Or is she?

And there really is a case. While there is no invisible dog, someone was using Matt Peterman’s fear of dogs to gaslight him for some nefarious purpose.

At the same time, this case has the feel of the movies The Adventure of Sherlock Holmes’ Smarter Brother and especially Without A Clue. In Without a Clue, Holmes the bumbling idiot is merely a front man for the real detective genius of Dr. John Watson. It also feels like a bit of They Might be Giants was added for spice.

While Tamara Norman is no detective genius, she is intelligent, sensible and grounded in the real world of the 21st century. It is her effort to keep Shirley Homes on track and out of too much trouble that eventually solves the mystery of the invisible dog, even as it pulls them all much deeper into the mystery of ‘Who is Shirley Homes?”

If you like your cozy mysteries with more than a touch of madcap, The Case of the Invisible Dog is a lark.

This tour includes a Rafflecopter giveaway for a $25 eGift Card to the eBook Retailer of the winner’s choice plus an eBook copy of THE CASE OF THE INVISIBLE DOG.

3 thoughts on “Review: The Case of the Invisible Dog by Diane Stingley + Giveaway”