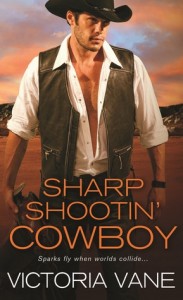 I am always happy to welcome Victoria Vane back to Reading Reality! If I’m counting right, this is her fourth guest post for me. I think she’s got the record! While I adored her historical Devil DeVere series, I am also glad that she has branched out to contemporaries, as with today’s featured review book Sharp Shootin’ Cowboy. This time, Victoria is here with a giveaway of the series, and her thoughts about her life has influenced the art of her writing.

How have your experiences (where you live, your family, romantic life, hobbies, etc.) influenced the things you like to write about?

Those familiar with my work already know that my historical books almost always have strong elements of reality. I usually incorporate my fictional characters into real events and/or use real people as secondary characters. In my contemporary stories, I get my inspiration from real life situations and virtually anything else that interests me.

SLOW HAND, the first book in my Hot Cowboy Nights series was very much inspired by my own experience when my father died- which included a meltdown very similar to Nikki’s in the middle of an airport. I was so distraught that they actually brought the plane back to the gate! Elements of her background also came from my own life.

My inspiration for ROUGH RIDER came from getting to know a number of real people in the rodeo world which is far more grit than glamour. Dirk became an amputee after I read numerous accounts of similarly wounded vets struggling to put their lives back together. They all deserve to be romance heroes.

The idea for SHARP SHOOTIN’ COWBOY came to life during a research trip to Montana where I met several ranchers who expressed concerns about the booming wolf population and the threat to their livestock. Intrigued by this, I began researching the re-introduction of wolves into the Rocky Mountain States. Upon discovering what a political powder keg this issue had become, I knew I had to write a story about wolves.

In ROUGH RIDER I had already introduced a secondary character named Reid Everett who was a Marine from Wyoming. He seemed to be the perfect candidate to become my hero. Reid is an interesting combination of cowboy and warrior, and a protector to the core. The heroine was much harder for me to get a handle on, until I decided that Reid was based at Camp Pendleton. Suddenly, the answer was clear—she was a California girl named Haley Cooper, which also meant that she was going to be his opposite in every conceivable way.

The fourth book in the series, A COWBOY’S WHISPER, was inspired by my own experiences with wild mustangs and the people who adopt them. I was fortunate to meet one of the few private individuals in the United States who trains them for adoption and got to talk on several occasions with the people who gather them from the wild. The hero of this story was modeled after a real life horse whisperer and the heroine was inspired by a wild horse documentarian.

I have always believed that incorporating real elements gives my stories a more genuine feel.

As for the romance part, after thirty two years of marriage, I am a true believer in both fidelity and lasting love. At the same time, I know that it takes a lot of work! And while I’m no prude about sex, (after thirty two years, we still burn up the sheets), I want it to occur in the context of a loving, caring, relationship. These are the kinds of stories I believe in and the ones I most want to write about. My greatest hope is that my stories will make readers laugh and cry and fall in love right along with my characters. 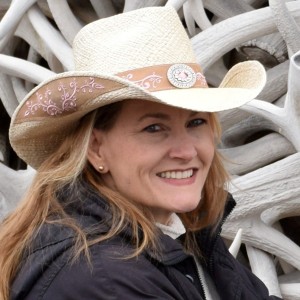 Victoria is giving away a Hot Cowboy Nights Book Bundle (3 books) to one lucky winner. See the rafflecopter below for deets on how to enter: