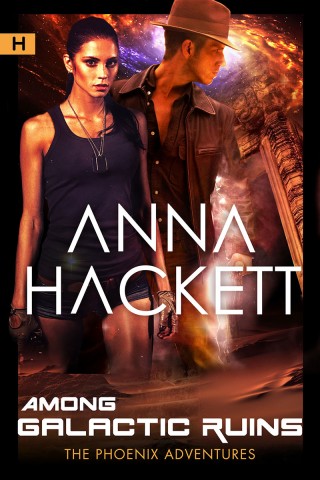 When astro-archeologist Lexa Carter discovers a map to an old Earth treasure, she’s thrilled about a treasure hunt to a dangerous, desert planet—but not about being saddled with head of security, Damon Malik. She thinks he’s arrogant. He thinks she’s a trouble magnet. But when the hunt turns deadly, they’ll have to trust each other just to survive.

In At Star’s End, the first novel in the Phoenix Adventures series, intergalactic treasure hunter Dathan Phoenix finds himself assisting astro-archaeologist Dr. Eos Rai in her hunt for a long-lost Terran treasure. And falling head over heels in love with the determined and beautiful scientist.

Now we know that this was fated, not by any biological fated-mate trope, but because when Dathan first struck out on his own as a treasure hunter, he assisted Damon Malik and Dr. Alexa Carter find a long-lost Terran treasure on his home planet of Zerzura.

Dathan was in his late teens, old enough to be rather freely sowing his wild oats as he criss-crossed Zerzura guiding treasure hunters and travelers over the planet. As he observes security expert Damon Malik fall head over heels for the very feisty, and extremely determined, Alexa Carter, Dathan is rather flippant about his intention to spread his charm over as many ladies as he can for as long as he’s able. He’s sure he’ll never get tied down to one woman.

Malik essentially curses him to find someone just like Alexa, or Dathan curses himself when he says, “Not sure I’ll ever find class like Dr. Carter, here. And I don’t want some astro-archeologist who’ll bitch at me for being a treasure hunter.” Of course, that’s exactly what he gets in At Star’s End (enthusiastically reviewed here).

But Among Galactic Ruins, while it certainly foreshadows At Star’s End, is really about the relationship between Dr. Alexa Clark and Damon Malik. Not that there aren’t plenty of parallels in their relationship to Dathan’s story.

Dr. Alexa Clark is the head curator at a prestigious private museum. Damon Malik is the conscientious and rather secretive head of security. Her ingenious exhibits are security nightmares, but extremely successful.

They both have pasts that they are trying to outrun. Malik grew up on a gang planet and was rescued by a Galactic Security Services officer he tried to pickpocket. While Alexa grew up the privileged daughter of a wealthy businessman on an inner-ring planet, it was a gilded cage that she was expected to remain in for the rest of her life. She rebelled and made her own way through school and into a profession that she loves.

Alexa has found a map, encoded on an ancient vase, to the location of one of the fabled, lost Faberge eggs of old Earth. Her map, full of cryptic clues, leads to the planet Zerzura, once a lush paradise, now a desert wasteland.

Alexa has always wanted to go on an expedition, and this is her chance. Her boss, concerned for her safety as well as that of the artifact she seeks, sends Malik along for her protection. A protection she badly needs, as the planet is dangerous and there are all too many people who have searched for the Temple that is reputed to contain the egg.

The danger starts upon landing, when the planet throws up a deadly sandstorm and the guide who stiffed her sends thugs to her room to steal the map. While they fail, this is only the first in a series of troublesome dangers that turn out not to be a coincidence.

With their new guide, Dathan Phoenix, leading them out, Malik and Carter follow those cryptic clues to a long-concealed location, fending off predators both natural and otherwise along the way, only to find that they are facing yet one more, and seemingly final, trap.

In the end, it is Alexa’s love of the profession that her father despised that saves the day for all of them.

Escape Rating A-: Okay, I’ll admit that if you’ve read At Star’s End, you can pretty much guess how Among Galactic Ruins is going to go. Which doesn’t make it any less fun, not by any stretch of the imagination.

It’s also fun to see Dathan Phoenix as a very young, and slightly less secure, man. Seeing Dathan interact with Damon Malik, it makes you wonder how much young Dathan modeled himself on Malik, who has become pretty much the kind of man that Dathan would like to be.

Damon Malik is a much better role model than Dathan’s real father, the drunken and disreputable Brocken Phoenix.

There are also elements of Indiana Jones and the Last Crusade, complete with Malik as the adult Indy and Dathan Phoenix (Dathan Phoenix equals River Phoenix?) as the young Indy. You can even see the resemblances if you squint. Among Galactic Ruins also reminded me a bit of Romancing the Stone, although Alexa Clark is a much more experienced and capable adventurer, even with her sheltered upbringing, than Joan Wilder in Stone.

The story in Among Galactic Ruins is an action/adventure romance. Malik and Clark fall in love during the high adrenaline rush of a dangerous treasure hunt. Because they already know each other, and mostly rub each other the wrong way, the brief love story doesn’t feel rushed, nor does it feel like insta-love. Their high-voltage arguments obviously conceal deeper feelings, and seem to have from the beginning. They start out combustible and the shared danger finally makes them combust!

In summary, Among Galactic Ruins is a sweet treat for fans of Hackett’s Phoenix Adventures, and a great place to start for someone who has yet to experience the fun of this terrific science fiction romance adventure series.

Reviewer’s Note: Among Galactic Ruins is currently available only as part of the Romancing the Alpha ebook “box” set. It will be available as a separate publication in August. When it will hopefully have its own cover.

Review: Ladder to the Red Star by Jael Wye