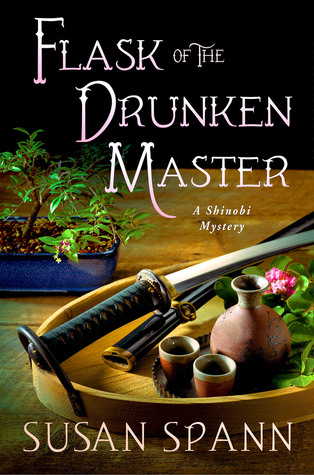 Master ninja Hiro Hattori and his companion Father Mateo are once again pulled into a murder investigation when a rival artisan turns up dead outside of their friend Ginjiro’s sake brewery. They must find the killer before the magistrate executes Ginjiro, seizes the brewery, and renders his family destitute. All the evidence implicates the brewer, yet with Kyoto on alert in the wake of the shogun’s recent death, Ginjiro’s is not the only life at risk.

As tensions rise, Hiro investigates a missing merchant, a vicious debt collector, a moneylender and the victim’s spendthrift son. But when a drunken Buddhist monk insists on helping Hiro and Father Mateo solve the crime, the monk’s bumbling threatens to foil the investigation altogether. With time running out, Hiro once again gambles on a clandestine mission to find the truth. Except that this time, Hiro isn’t the only one with a secret mission to fulfill.

While every bit as captivating as its two predecessors, Claws of the Cat and Blade of the Samurai (enthusiastically reviewed here and here) it also takes off in slightly different direction from those previous two books in this series.

In their earlier adventures, Father Mateo and his bodyguard, the shinobi (read ninja) Hiro found themselves investigating within the halls of power; solving murders at the heart of the shogunate, risking their lives to determine the guilt or innocence of possible killers with their own lives tied to the results of a successful investigation under excruciating time pressure.

In Flask of the Drunken Master, while the crime is still serious, their own lives do not directly hang in the balance. And they are working far from the halls of power. The sake brewer Ginjiro has been accused of murdering his rival Chikao with one of his own sake flasks in the back of his own shop.

It does not help Ginjiro’s case that the two men were heard arguing earlier that evening, to the point of exchanging the kind of threats and insults that always come back to haunt one whenever the other party to the argument turns up dead.

Ginjiro is not a friend of Hiro’s, because samurai cannot be friends with merchants. But Hiro feels that owes Ginjiro a debt of honor. It also seems as if Hiro has an unrequited crush on Ginjiro’s lovely daughter Tomiko, but then, so do half the men in the neighborhood.

Tomiko is certain that her father is not guilty. But of course she would be. Ginjiro seems to be a genuinely good man. But so was the murder victim, Chikao. However, Chikao’s son Kauru is a spoiled, self-centered pig. And I just insulted pigs.

More importantly, Ginjiro does not benefit from Chikao’s murder. None of that seems to matter to the magistrate, who immediately carts Ginjiro to prison to be tortured until he confesses to a crime that he probably did not commit.

Hiro, with Father Mateo’s help, has four days at most to figure out who the real killer is and prove it. In the course of his investigation he turns up all too many people with a motive, but can’t find one who can be proved to have had the opportunity.

As Hiro races the clock to make sure that an innocent man isn’t punished, he is also confronted with the indirect results of his actions in the previous stories. The shogunate is under contention, and Kyoto is under siege by samurai belonging to one of the rival powers. Unfortunately for Hiro and Father Mateo, their housemate has been gun running to too many of the possible contenders.

By the end of the case, Hiro knows that there is a storm coming in to Kyoto that will test his loyalty and his honor. All he can do is watch which way the winds blow.

Escape Rating A: Flask of the Drunken Master was the perfect antidote for the awful book I reviewed yesterday at The Book Pushers. It’s wonderful when karma works its powers for good!

In previous reviews I have compared Hiro and his investigative methods to Brother Cadfael in Ellis Peters’ landmark historical mystery series, and I felt that resemblance even more strongly in this book. Cadfael usually investigated crimes that involved ordinary people, and the case of the brewer Ginjiro and his dead rival was certainly a case of that type. 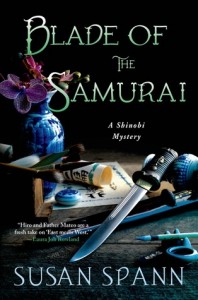 Hiro also solves cases the way that Cadfael does. He has no forensic science except his own knowledge of how dead bodies appear, and how people act, or don’t act, in and especially out of character. He is intelligent and determined. Also occasionally ruthless. He gets to the bottom of the case, even when, as in the cases in Blade of the Samurai, it is very possible that the criminal is a friend or colleague.

As a shinobi, or shadow warrior, Hiro is always an outsider, always an observer, even when he seems to be most at home. He does not completely belong to any group, so he can be a relatively disinterested observer.

It is fascinating to watch the changes in Hiro’s relationship with Father Mateo. The scene where Hiro realizes that has not respected Father Mateo’s beliefs, and that he owes amends, is excellent and something we could all learn from. Hiro finally realizes that even though he does not and never will believe as Mateo does, he needs to respect Mateo’s beliefs and his sincerity in them.

As each story in this series unfolds, we see more and more into this time and place that was so completely closed from Western eyes, and possibly with good reason. Mateo’s foreignness allows Hiro to pry by proxy into areas and places where the strict rules of his society do not allow, and at the same time gives him an insight to question his beliefs, whether to confirm them or confront them.

This is a partnership and a setting that I will be happy to return to again and again.

I’m very happy to say that I am able to give away a copy of Flask of the Drunken Master to one lucky U.S. or Canadian commenter.

Review: Blade of the Samurai by Susan Spann + Giveaway

7 thoughts on “Review: Flask of the Drunken Master by Susan Spann + Giveaway”