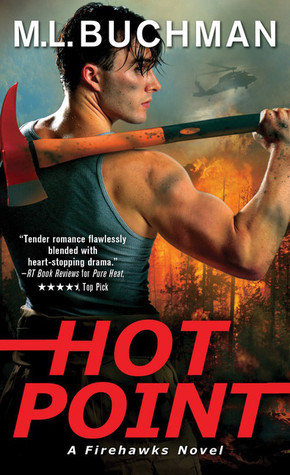 The elite firefighters of Mount Hood Aviation fly into places even the CIA can’t penetrate.

FROM WILDFIRE TO GUNFIRE

Master mechanic Denise Conroy—with a reputation for being as steel-clad as the aircraft she keeps aloft—shuns useless flyboys who don’t know one end of a wrench from the other.

Firehawk pilot Vern Taylor—known for unstoppable charm and a complete lack of mechanical skills—proves his talent for out-of-the-box thinking with every flight. He’s a survivor and a natural-born heli-aviation firefighter.

When Denise and Vern crash together in the Central American jungle with wildfire on one side and a full-fledged military coup on the other, their newly forged partnership is tested to the max. They have each other, but not even their formidable skills combined can protect Denise and Vern from the conflagration sweeping the jungle… and their hearts.

I have read and enjoyed many, many previous entries in both of M.L. Buchman’s connected military/romantic suspense series, The Night Stalkers and Firehawks.

If you prefer your romantic suspense with a higher military quotient, start The Night Stalkers with The Night is Mine, reviewed here. If you prefer your romantic suspense with more domestic danger, for very loose definitions of domestic, start with Pure Heat, reviewed here. Either way, the romance is hot, the suspense is very, very dangerous, the heroes are alpha but not alpha-holes, and the women are every bit as alpha, and every bit as professional, as the men.

The series are loosely interconnected, so it is very possible to read one without the other. However, this is one of those “Why would you?” questions.

Hot Point is a Firehawks story, and as such it does follow the pattern set by previous stories in the series. Not that this is a bad thing, the pattern definitely works.

One of the parties in the romance tends to be a bit of a misfit, but highly competent at their extremely technical job. The other one is equally competent, or they wouldn’t be part of Mount Hood Aviation in the first place. But that second person is usually slightly more socially ept. However, neither of the people who become involved in the romance expect to fall for anyone anytime soon, if at all.

That’s what happens in Hot Point. Vern, the helicopter pilot, is very competent. He has experience both with the Coast Guard and now fighting fires with MHA for 4 years. He may be one of the best helicopter pilots in the world outside of the military, and would possibly still rank highly within it. He is also a first-class charmer of the “love ‘em and leave ‘em” school. He’s not interested in long term until ace mechanic Denise Conroy gets under his skin.

Denise is one of the best helicopter mechanics that MHA has ever seen. Unfortunately, Denise is a bit standoffish and seems to be a stainless steel bitch. Of course, she is anything but. Instead, she’s the daughter of a widower who never recovered after the death of his wife – a woman that her surviving daughter resembles all too much. Denise is afraid to get close to anyone out of fear that she will lose them.

She’s way more competent with helicopter engines than she believes she is with other people. When she and Vern collide after his helicopter develops a fault mid-flight, they find themselves drawn to each other and into an intense relationship that neither expected.

They also bond over their mutual suspicion that there is more to MHA than merely fighting forest fires – not that that occupation isn’t dangerous enough. When former SOAR pilots own a crackerjack firefighting outfit, there are times when the U.S. military requests plausibly deniable backup in places that are hot spots in more ways than one.

Vern and Denise find themselves in the midst of MHA’s “second contract” either leading a coup d’etat in Honduras or trying to prevent it. As the bullets fly, they both start thinking that a regular civilian job might be a whole lot safer – if they live long enough to enjoy it.

Escape Rating B+: This series is always fun. I will confess that I’m finding the author’s new numbering scheme a bit awkward. About half the books it takes to reach #10 in this series are actually novellas. Oh well, that will make it just that much easier for me to catch up on the few that I’ve missed.

One of the things I really, really love about both of Buchman’s romantic suspense series, is the way that he draws the female characters. Every single one of them is an ace at what she does. Also all of them have the scars that any hyper-competent woman ends up with. One either ends up compromising one’s integrity in order to seem less capable, or discovers that one’s dating pool is extremely limited, because there are too many men who find them hard to take, even though that same hyper-competence is a trait they would either admire or envy in another man.

Some of Denise’s scars are of this type. She loves helicopter mechanics, and she is awesome at it. She’s also not very social, because she’s spent a lot of her life lost in either a book or a helicopter engine, and sometimes both at the same time. She isn’t traditionally feminine, and it is really clear that her last boyfriend was emotionally abusive about it.

The number of times and different ways that Jasper demeaned her and made her feel less than (even in memory) were so heartbreaking that I half expected him to come back and try to mess with Denise’s head all over again, but I’m glad that he didn’t appear. That would have been a traditional, and cliched way of created the crisis near the end of the story.

However, the jerk was mentioned so often he became kind of a Chekhov’s gun, he just never went off. So to speak.

Instead, what we have is a lovely romance between two people who constantly throw themselves in harm’s way, and who never expected to find someone else to be their equal. Denise becomes more comfortable in herself by being loved, and Vern finds himself more grounded. They fit each other perfectly.

The military mess at the end was an absolute hoot. They aren’t sure whether they are being kidnapped or enlisted, and don’t figure out until the end whether they are preserving the Honduran government or have been coerced into helping bring it down. The addition of Michael Gibson (hero of Bring on the Dusk, reviewed here), in disguise and in trouble, injects just the right amount of danger as well as linking back to The Night Stalkers.

A new entry in either of Buchman’s series is always a treat. I can’t wait for the next adventure. 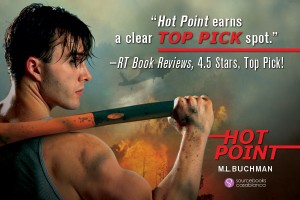 Sourcebooks Casablanca is giving away 5 Copies of Pure Heat, Book 1 in the Firehawks Series by M.L. Buchman
a Rafflecopter giveaway