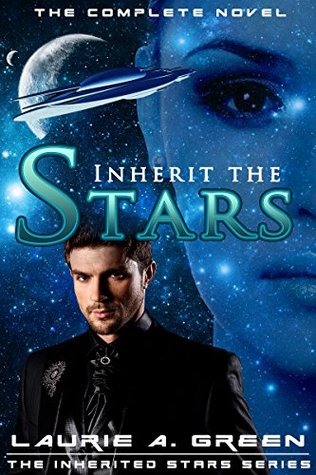 To escape the merciless Ithian Alliance, Sair, a fugitive slave, makes a desperate deal with Drea Mennelsohn, captain of the prototype ship, Specter. But putting his life in the hands of a woman as mysterious as she is beguiling could turn out to be the biggest mistake of his life, especially when the price on his head begins to escalate.

Drea seems to want far more from the fugitive than just payment for his passage on her ship. Though neither can deny the sizzling chemistry and growing bond between them, Sair must soon make an agonizing decision that could result in the loss of the remarkable woman he has fallen in love with—and their chance to inherit the stars.

Inherit the Stars is a completely absorbing science fiction novel of the “plucky Rebels vs. the evil Empire” school, with some fascinating twists. Among those twists is a heart-stopping and panty-melting sexy romance.

But while the romance provides some of the heart and depth to the story, it’s the way that the good guys take out the bad guys (for loose definition of “good”, “bad” and “guys”) that will leave you pondering long after you finish the story.

The story begins when the escaped slave Sair is reluctantly welcomes aboard the spaceship Specter, and once we start the wild ride, the tension never lets up.

While I’m not overly fond of the “Mars needs women” trope of sex slave fantasies in SF and SFR, this version turns that trope on its head.

Sair has been a stud, or sex slave, for ten years in the Ithian Alliance, the last several years in the household of the planetary premier. The way that the old trope is turned on its head is that the purpose of sex slavery on the Ithian planets is not the sex. It’s not even the production of more slaves.

The Ithians are cannibals. The sex slaves are effectively farm animals.

It’s the discovery that all the children he has sired during his years as a slave have been auctioned off in literal meat markets that drives Sair to escape – right into the arms of a rebellion that he doesn’t know exists.

The Ithian Alliance is the most powerful political and economic force in the human-settled portion of the galaxy. All the planets in the region pay the Ithians a slave-tithe, except for a few that have been allowed to remain free, and that’s probably only a matter of time.

Sair was part of a slave-tithe from his home planet – a planet whose military also serves as the Ithians bully-boys. When he escapes, he becomes a target not just because of the mysteriously ever-increasing price on his head, but also because his own people are hated and despised.

But Sair jumps out of the frying pan and into the fire when he begs for passage on the Specter, because neither the ship nor her Captain are exactly what they seem.

The Specter has way more capabilities than any ship her size should possibly have, and her Captain, Drea Mennelsohn, is married to her ship in a way that makes her much, much more than just a captain, and sometimes makes her feel much less than a woman.

In spite of their various handicaps, hang ups and extremely heavy baggage, Drea and Sair are attracted to each other. Even though they try to hide and ignore their growing feelings for each other, they can’t let each other go. Even when they should.

But when Sair finally earns the respect of Drea’s first mate Zjel, the tight bond of something more than mere friendship invokes what Zjel’s people call a Fate Storm. Together, the three of them will change history. But only if they help each other.

And history needs changing. The Specter and her crew are part of a much bigger plan to bring down the Ithian Alliance, and Sair turns out to be the perfect bait in their trap. But only if he is willing to forget everything that Drea means to him, and everything that the rebels have taught him about who and what he really is.

He might save the galaxy at the cost of his and Drea’s souls, and still count it worth the bargain. But is it enough?

Escape Rating A+: I didn’t just love this, I simply couldn’t stop reading it. I started at lunch and finished in the same evening. I was so eager to find out what would happen next that I kept picking the book up during game saves and cutscenes, to the point where I bowed to the inevitable and stopped playing to just finish!

After having read Video Game Storytelling a couple of days ago, I found myself looking for the logic behind the motives, particularly for the villains of the piece, the Ithians. Cannibalism is just hard for us to swallow, even in situations of extreme danger like the Donner Party incident in the 1840s. The Ithians are not in anything like Donner Pass, they live at the center of a vast economic and political empire, and can afford to buy anything that they need or want. But one of the Ithians describes the circumstances under which cannibalism became traditional, and it makes bad sense. Meaning that the reader can see how it came about for them, while totally rejecting the idea that it is good, or right, or even justifiable to anyone else.

The final baddie is a bit evil for evil’s sake, but not too much. And he’s also not the boss, he’s the final catalyst for the story to reach its ending. And he’s admittedly crazy by the end, but again, with reasons why he’s crazy.

Drea’s situation is interesting, but also slightly familiar to anyone who read Anne McCaffrey’s The Ship Who Sang, or anything that derives from it. Drea’s situation isn’t quite the same as Helga’s, but they would see each other as cousins. IMHO.

The pace of this story makes it an edge-of-the-seat read. It’s not just that there is always something happening, and usually going spectacularly wrong, or that they are always being chased by someone out for Sair’s bounty or Drea’s smuggling. It’s that around every corner there is a new revelation, and each time something is revealed, the story twists in a new direction.

Last, but not least, I want to say something about the methods that the rebels use for breaking the Ithian Alliance. It is not something I’ve seen before, and while it makes sense in context, it does make you think. A lot. It was certainly a novel solution, and it did arguably work. But whether it was the right thing to do, or not, is something that the reader will have to judge for themselves.

I’m still mulling that one over. But any book that makes me think that hard while delivering a mighty punch of entertainment is absolutely awesome.

One thought on “Review: Inherit the Stars by Laurie A. Green”