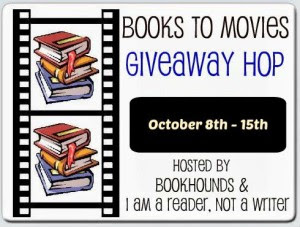 Welcome to the Books to Movies Giveaway Hop, hosted by Bookhounds and I Am a Reader.

The theme here is pretty obvious, books that have been turned into movies. As popular as the release of a movie makes its originating book, there is also a meme that says “Never Judge a Book by its Movie”, which has a whole lot of truth in it. 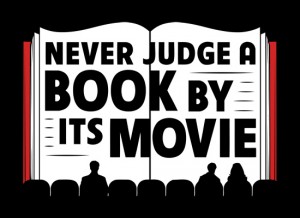 The movie has to leave a lot of stuff out that was in the book. Translating a 300 page book into a movie probably gets a 12 hour movie, if not longer. And they might not even be a great 12 hours.

Rumor has it (also a ton of reviews) that the movie of The Martian might be better than the book. There’s always one exception that proves the rule. But usually, the book loses something in the translation. Don’t get me started on the translation of The Hobbit, which was a fairly short book, into three much-padded movies. On the other hand, I wouldn’t have minded a bit if The Lord of the Rings had been 4, 5 or even 6 movies instead of three. There is an awful lot of there, there, and a lot of it had to be cut. 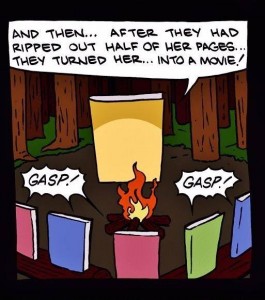 a Rafflecopter giveaway
For more bookish and movie-ish related prizes, be sure to visit the other stops on the hop: <!– end LinkyTools script –>