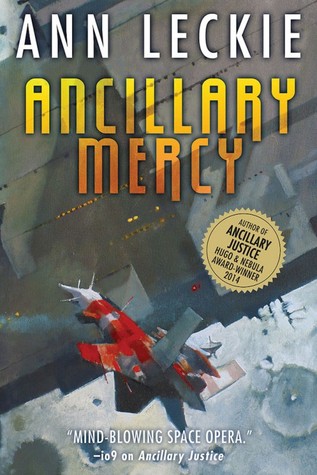 The stunning conclusion to the trilogy that began with the Hugo, Nebula, and Arthur C. Clarke award-winning Ancillary Justice.
For a moment, things seem to be under control for the soldier known as Breq. Then a search of Atheok Station's slums turns up someone who shouldn't exist - someone who might be an ancillary from a ship that's been hiding beyond the empire's reach for three thousand years. Meanwhile, a messenger from the alien and mysterious Presger empire arrives, as does Breq's enemy, the divided and quite possibly insane Anaander Mianaai - ruler of an empire at war with itself.
Anaander is heavily armed and extremely unhappy with Breq. She could take her ship and crew and flee, but that would leave everyone at Athoek in terrible danger. Breq has a desperate plan. The odds aren't good, but that's never stopped her before.

I absolutely adored both Ancillary Justice (review) and Ancillary Sword (review) so I preordered Ancillary Mercy and was so happy to see it pop up on my iPad Tuesday morning that I started reading it immediately.

Now that I’ve finished, I have comments. And questions. And yet again, an absolutely terrible book hangover. Neither Breq’s story nor the story of the Imperial Radch feel anywhere near done, but I want more.

On that other hand, while it feels like there is still more story to tell, I’m not exactly sure where it goes next. Or, for that matter, what type of ship the next one will be named for. Unless it’s Ancillary Gem? Or perhaps the author will take the story of this universe in a different direction altogether. As long as there are more, I’m happy.

Ancillary Mercy continues directly on from Ancillary Sword. And this is definitely a series where it is practically required that the reader have read the previous entries. While there is enough information about prior events to refresh the memory of a reader who read the last book last year, there doesn’t feel like enough to fill in the necessary background for someone who comes into Ancillary Mercy cold.

There are lots of players, and you really need a scorecard – especially since some of the clues that one usually uses to differentiate characters are missing.

The conceit in this series is that Breq simply doesn’t care about gender pronouns. Whether that is because she used to be a ship, and ships don’t have gender, or because the noun her language uses for people is “Citizen”, which also has no gender, or that the universe’s culture has finally moved beyond gender, the reader doesn’t know. But when Breq is required to use a gendered pronoun, she always uses “she”. It could be that the universal default has become “she”, where for us the default is currently “he”. Whatever the reason, it makes things interesting. From Breq’s perspective, it does not matter whether the citizen she is addressing or thinking about is either male or female.

Occasionally it matters to us, but not really all that often. Whether a character is female or male does not affect whether or not they can do their jobs, or fulfill their part in this story. But there are a lot of characters in this story and losing a piece of what we normally use as identification sometimes makes it difficult to keep all of the secondary and tertiary characters straight.

We don’t actually know whether the ruler of the Radch, Anaander Mianaai, is male or female. Because that’s not the important thing about the Lord of the Radch. The real problem with Anaander Mianaai is that she has cloned and split herself into multiple bodies, each containing pieces of her consciousness. They have developed a serious split personality and are now at war with each other. But all of them are the Lord of the Radch, and citizens find themselves obeying different factions of the same person without being aware of it.

Meanwhile, this very, very uncivil war is doing exactly the opposite of what the Radch was supposed to do. The Imperial Radch was built to civilize and protect its citizens. While there can be some questions about how many people were killed or re-educated in order to bring about the civilization and protection, there is no question that the war between the facets of the Lord of the Radch is killing lots of citizens for no good reason except that Anaander Mianaai has quite possibly gone mad.

And Breq, and whoever she cares about or is protecting, is caught smack in the middle. She doesn’t really support any of the Lords, although she is more sympathetic to some aspects than others. And the most violent facet of Anaander Mianaai personally hates Breq and everything she stands for. And will do anything or destroy anyone in order to stop her. 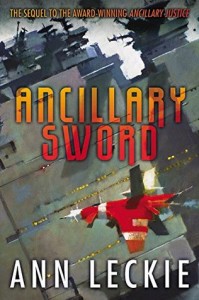 Escape Rating A-: Ancillary Mercy is a very political space opera. Not just because of the mess in the Radch, but also because of Breq’s current base of operation. She has been assigned to Athoek Station since the beginning of Ancillary Sword, and has found herself, or inserted herself, into local politics.

Breq always wants to do what is fair and what is right. She still carries with her a lot of her programming from when she was part of the ship Justice of Toren. Her job was to protect and care for her crew, and she is still doing that. Admittedly the definitions of crew have expanded quite a bit. She cares and protects everyone, not just those who are wealthy or well-born or of the right race or bloodlines. Which generally pisses the rich, high-born and upper-caste races off in a big way.

She is generally impartial, but she doesn’t suffer fools or the self-important. And people are afraid of her because she is physically powerful, has an armed ship backing her up, and because she can’t be bought.

Which makes her a fine target for the facet of Anaander Mianaai that hates her when she comes to Athoek, and gives the upper crust a chance to believe the worst of her. Meanwhile, Breq is off convincing the giant AIs that run ships and stations that maybe, just maybe, they are worthy of being citizens in their own right and having self-determination. They don’t want Anaander Mianaai to turn them all back into relatively mindless slaves again, or destroy them.

And there’s a big monkey wrench in everyone’s plans. The alien Presger, who feel a lot like the Meddlers in Jean Johnson’s Theirs Not to Reason Why series, are trying to decide which, if any, of the races of the Radch are significant enough to maintain a non-aggression treaty with. And while the Translator (read Ambassador) Zeiat seems like a buffoon, he is actually more powerful than anyone imagines. Also way more quirky.

There are lots of chefs tinkering with the soup of the Radch, and not all of them have her citizens at heart. Or sometimes even a clue about what they are doing. Breq steps into that breach and pulls a big and surprising rabbit out of the helmet she seldom wears. And Breq, Athoek Station, the Radch and even the Presger will never be the same.