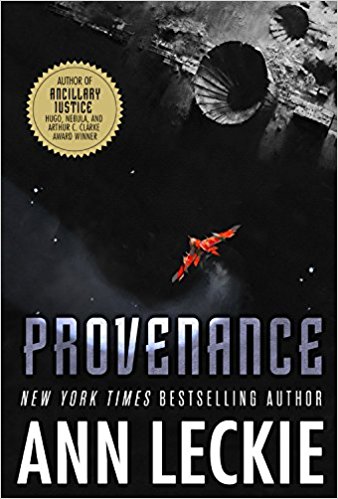 A power-driven young woman has just one chance to secure the status she craves and regain priceless lost artefacts prized by her people. She must free their thief from a prison planet from which no one has ever returned.

Ingray and her charge will return to their home world to find their planet in political turmoil, at the heart of an escalating interstellar conflict. Together, they must make a new plan to salvage Ingray's future, her family, and her world, before they are lost to her for good.

Provenance was awesome. I mean like stay up half the night, read in the bathroom at work awesome. I’m not sure it matches the blurb AT ALL, but I loved every minute of it.

It also reminded me more than a bit of John Scalzi’s The Collapsing Empire, but I’m absolutely not sure why. It just did. And since I loved that too, it’s a good thing.

Although it was a bit hard to tell from the promos, Provenance is part of the Imperial Radch of Ancillary Justice. Well, it is in the sorta/kinda sense. This is the same universe that was created for that series. The Radchaii are a presence. But not a big one. Or a particularly well-liked one. Provenance, instead, takes place outside of the Imperial Radch, in a system that acknowledges the existence of the Radch and resents the way that the Radchaii act as though they speak for all of humanity – which they don’t. Except when they kind of do.

Politics is always fascinating. And makes for the kind of large-scale conflict that can drive a book series into the stars.

The conflict in Provenance is a bit smaller scale. The story here takes place on Hwae, and involves a kind of cold war turned lukewarm over the control of the gates that make interstellar travel both possible and reasonable.

It’s also about what a society believes about itself, and what it values.

And strangely enough, it really is about provenance, in its dictionary definition. The Hwae give great weight and reverence to what they call “vestiges”. In their culture, “vestiges” are certified artifacts of important, or not so important events. To make it clearer, the Hwae would consider a signed, original U.S. Constitution, or a signed, original Magna Carta, for example, as a “vestige”. These are artifacts of important events that were present at the event itself.

What’s at issue in Provenance is that the Hwae veneration of “vestiges” has extended to anything that might have been tangentially present at an important event or in the proximity of an important personage. And material at that remove is all too easy to fake. After all, how does one determine if a specific floor tile was or was not ever trod upon by one our “Founding Fathers”? Or one of theirs?

So this is Ingray’s story. She attempts, through some rather underhanded means, to gain access to a treasure trove of stolen “vestiges”. She’s trying to impress her mother and gain a much needed advantage over her brother. She’s certain that she needs to do both if she’s to keep her place in the family, and keep her home.

But what she discovers instead is part of the vast and rather stinking underbelly of her own culture, and the even nastier ways that their enemies are attempting to exploit that stink for their own nefarious ends.

Caught in the literal cross-fire, Ingray can only do what she does best – indulge in five minutes of panic and then think her way out. Even if her exit is, as it often is, out of the frying pan into the fire.

Even if that fire is gunfire.

Escape Rating A: If you are searching for an excellent piece of science fiction, particularly space opera of the “diplomacy is war waged by quieter means” type, Provenance is a winner from beginning to end.

It starts out small, and keeps growing bigger and bigger as the story goes on. We start with Ingray and her rather ingenious but extremely foolhardy plan. She just wants to get back at her brother, who is a douche. And she does it because she’s just tired of him being smug and superior. She hopes to embarrass him, she does not expect to gain actual permanent ascension.

And yes, there’s an element of be careful what you wish for, because you might get it, woven into the story.

What makes this story work is the way that the complexities are introduced. While this is not told in the first-person, Ingray is still our point of view character. As her view expands, we learn more about her world and what moves and shakes it. As does she.

So we start with an uncertain young woman in the midst of a not terribly well thought out scheme that has just gone awry. While parts of the scheme might have had large implications, her purpose was relatively small – putting one over on her brother.

But as her rather rudimentary plans go further and further out the airlock, more people, more situations, and more politics get involved. All seen from Ingray’s perspective, as she has to cope with more and more crap being thrown at her. And always feels, as most of us do at least some of the time, that she’s in WAY over her head while the crap is continuing to rise.

Our perspective and understanding grow. As does hers. And we feel for her as it does. So in the end, we stand with her as all her choices come full-circle. And she leaps out.

One thought on “Review: Provenance by Ann Leckie”