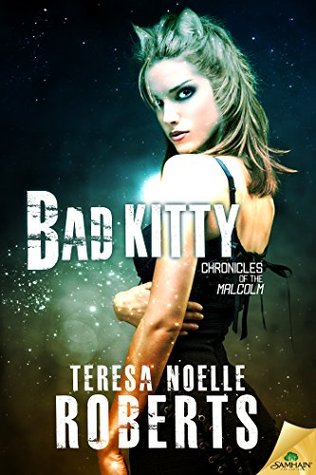 When you make the Devil's bargain, be prepared to take the heat. A lot of heat. Chronicles of the Malcolm, Book 2 Most of Xia's early memories are repressed, thank the Great Cat Mother. But her body remembers how to kill. The longer she and her fellow Malcolm crewmates are holed up on Cibari hiding from assassins, the twitchier she gets-until the planet's insanely sexy Warlord, Rahal Mizyar, borrows her skills to take out slavers. Rahal suspects Xia is his mate, but the human-raised female never learned the finer points of felinoid rituals. The solution: make her fall hard and fast for him, even if it means playing dirty. Hired to determine if Xia is the long-missing granddaughter of the felinoid prime minister, Cal Janssen has finally tracked her down. Getting past Rahal, though, is a problem-until he's mistaken for a notorious arms dealer and playboy. And he finds himself the object of both Rahal's and Xia's seduction. When their first mission brings Xia's memories bulleting back to the surface, she realizes she's fallen for two men who don't exist. Running away, however, could be her deadliest mistake. Warning: Contains an assassin with a swiss cheese memory, a badass warlord who's getting tired of his own con, and a freelance lawman. Secrets, lies, and hot sex with no rules. 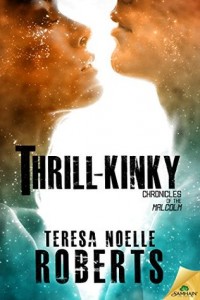 Bad Kitty is the direct followup to Thrill-Kinky (reviewed yesterday). And while it helps in understanding the world of the space-freighter Malcolm to read both books, I think it would be possible to read Bad Kitty without reading Thrill-Kinky first.

On the other hand, why would you? These are short bursts of Firefly-type fun, and the worldbuilding gets deeper the further in you go.

Where Thrill-Kinky was mechanic Rita’s story, Bad Kitty is felinoid Xia’s journey. While it isn’t completely clear what Xia does on the Malcolm, it is very clear who she is. Mik and Gan rescued her after she killed her rapist, back when she was about 7. Mik and Gan are her dads, no matter who (and what) her birthparents might have been.

But in the big action scene in Thrill-Kinky, the now adult Xia begins to unravel the secrets of her life before Mik and Gan rescued her, and those secrets begin to unravel her. Felinoids, in spite of their generally cute appearance, are apex predators. They are very smart, with long retractable claws and very sharp teeth, and they like to hunt. But Xia is a special case. Somewhere between the death of her birthparents and her adoption by Mik and Gan, someone trained Xia to be an assassin. A very, very good one.

However, Xia had learned to suppress those bad memories, and not see everyone and everything as prey. The meditation techniques that Gan taught her have helped, but not enough. Now that the memory genie is out of the bottle, the darkness inside Xia wants her to feed it with more blood and more death.

Most felinoids learn how to distinguish prey from play when they are young. They are taught by their parents as part of growing up. But at that critical juncture, Xia was taught to kill instead. Her ability to keep her instincts at bay is fraying.

When the Malcolm lands on the lawless planet Cibari, Xia finds someone who can help her deal with all her felinoid impulses. The warlord of Cibari, Rahal, is an adult felinoid who strikes Xia as sex-on-legs. Rahal sees Xia as the mate he never expected to find. So while Rahal was more than willing to help his buddy Drax out of jam, he is highly motivated to protect Xia at all costs.

Little does Rahal or Xia know that the cat-girl is firmly fixed in someone else’s sights, and that her long-buried memories are about to jump out and bite everyone who cares about her. Especially the undercover bounty hunter who has lied his way into both Rahal’s and Xia’s hearts.

Escape Rating B+: Just like Thrill-Kinky, Bad Kitty is also a very-hot-sex-into-love story. Rahal and Xia (and eventually Karn/Cal) are definitely into the screw first and work out relationships later school of thought (or libido). There is plenty of insta-lust all around, but it works in this story.

Xia and Rahal are both members of a species that just likes playing, with anyone and everyone, in infinite combinations. Often with infinite diversity. Cal/Karn is pretending to be an interstellar playboy and arms dealer who is notorious for swinging every way possible. These three are just meant to fall into bed (or a pile of cushions) together.

As their stories combine, the play becomes more serious, and none of them are expecting it. Rahal is pretty sure that Xia is his mate, but Xia has no idea that the mating drive exists among her species. It’s a private thing, and she was raised by non-felinoids. But they all end up feeling it long before the drive is so all-consuming that rational thought disintegrates.

But the underlying story here is the story of Xia’s birth and origins. Cal/Karn comes to Cibari on a mission to bring Xia back to her grandmother. But something about the way that the job is given to him doesn’t mesh with the way felinoids operate. Something is off, and Cal/Karn decides to figure out what that something is before he takes Xia away from the only security she has ever known.

The more Xia remembers about her true past, the more heartbreaking her story is. The climactic moment when she has to decide whether to be the girl that Mik and Gan raised or the assassin that she was trained to be is surprisingly touching.

Her reluctance to reach for true intimacy, and to let go of the nightmares that rightfully haunt her sleep, gives this story its heart. The mission to take down the baddies who are after all of them gives the story its punch. And it’s fun!

One thought on “Review: Bad Kitty by Teresa Noelle Roberts”