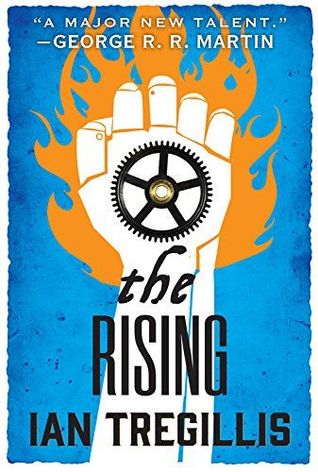 The second book in the Alchemy Wars trilogy by Ian Tregillis, an epic tale of liberation and war. Jax, a rogue Clakker, has wreaked havoc upon the Clockmakers' Guild by destroying the Grand Forge. Reborn in the flames, he must begin his life as a free Clakker, but liberation proves its own burden.

Berenice, formerly the legendary spymaster of New France, mastermind behind her nation's attempts to undermine the Dutch Hegemony -- has been banished from her homeland and captured by the Clockmakers Guild's draconian secret police force.Meanwhile, Captain Hugo Longchamp is faced with rallying the beleaguered and untested defenders of Marseilles-in-the-West for the inevitable onslaught from the Brasswork Throne and its army of mechanical soldiers. 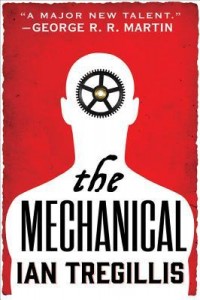 If you like epic visions of alternate history, get yourself a copy of the first completely awesome story in The Alchemy Wars, The Mechanical (enthusiastically reviewed here) and be prepared to be transported to a world where mechanical men and women are much, much more human than the biological beings that created them. Becoming the proud possessors of a slave-race, or even being the embattled warriors against the power of those possessors, clearly knocks the humanity right out of any of the so-called humans involved.

The Rising is the second book in the author’s Alchemy Wars series, and it is every bit as absorbing, and even more grim, than the first book. But it isn’t just grim for grimness’ sake. This story needs to explore all the dark places of its world, and of the hearts of the people in it, before it will earn its conclusion. And while I hope situations improve, it isn’t necessary that they do for this story to work.

At least so far, this is a story about power corrupting, and absolute power corrupting absolutely. A place where the most desperate of ends are brought about by the vilest of means. There are times when it feels like a breakneck race to the bottom, where the clakkers may inherit the world only to discover that they are just as corrupted as their former masters.

But we’re not there yet, and the journey so far is one hell of an adventure.

There are three sides to this conflict, but the humans are only certain about two. The Dutch are taking over the world, using their clakker army. With a seemingly endless supply of military clakkers, the Dutch are rapidly closing in on the last bastion of human resistance, Marseilles-in-the-West, the beleaguered capital of New France. We see the defense of the city through the eyes of Captain Hugo Longchamp, a former sergeant and long-time military man who found himself an unexpected hero when he defeated a clakker single-handedly. While Hugo does not command the rump of the French Army, it is pretty clear that he is its only real military leader. He is going to defend his capital, his country, his religion and his king to his last breath, and plans to take as many clakkers out with him when he goes as is superhumanly possible. At the same time, he provides an incredibly realistic voice of a veteran soldier who is just so damned tired, but knows in his bones that he has to get up and fight another day, another hour, another minute.

While Hugo is stuck, and eventually besieged, in Marseilles-in-the-West, his former compatriot Berenice is travelling from North America to Europe and back again. Once upon a time, Berenice was New France’s spymaster. Now she is an exile, but she is still trying to find a way to suborn the clakkers into serving New France instead of the Dutch Brasswork Throne. She has absolutely no scruples whatsoever, only a desire to protect her country at any and all costs. She is completely amoral, and incredibly loyal, both at the same time.

While we don’t have a point of view character to represent the Dutch clakker-masters, the clakker Daniel, formerly known as Jax, seems to be the hero of this story. We follow Daniel’s journey as he escapes human control and discovers the fabled Neverland, home of the free clakkers, only to discover that the free clakkers aren’t nearly so free as myths make them.

In the end, Daniel finds himself back among the humans, in an uneasy alliance with Berenice as they each try to betray the other before the other does onto them. Who wins? Only time, and the next book in the series, will tell.

But whatever the answers turn out to be, just like the fable of Neverland, nothing will turn out to be the way it seems. And that’s awesome.

Escape Rating A: The Rising is even darker than The Mechanical, and every bit as compelling.

One of the things that keeps fascinating me is just how backwards the 1926 of the Alchemy Wars is. By 1926, we had airplanes, trains, electricity, steam power, increasing rights to vote in western democracies, fewer monarchies with real power, more democracy in general, more scientific development, and lots more. Telephones and telegraphs, the instantaneous communications revolution of the 1800s. The 1926 of the Alchemy Wars has very few of these things. In the Dutch Hegemony, scientific exploration seems to have stopped with the widespread use of clakkers. In New France, what research and development there is is devoted to stopping the clakkers. The world is going to hell in a handcart, and it seems to be picking up speed on the tracks.

The Tuniers’ Guild of the Dutch is frightening in the extreme. Not content with controlling all the clakkers, they have discovered a means to take away a human’s free will, in effect, turning that person into both a biological clakker and an unstoppable double-agent. Their clakkers, even enslaved, have way more humanity than the people who control them.

It makes sense that the story has no point of view character among the ruling Dutch. Their perspective of maintaining and extending the awful status quo, while creepily fascinating, isn’t nearly as interesting as the perspective of Berenice, who has fought them so long and so hard that she has nearly become them, or Hugo Longchamp, who is fighting the long defeat and knows he’s losing.

But it is Jax, now Daniel, whose journey is the most interesting, and who we follow. Jax begins as slave, and is accidentally freed. But as he moves from Dutch slave to French collaborator to clakker resistance fighter, we see his transformation from mechanical to human. And in its reflection we see all too many humans transform into mechanical monsters.

One thought on “Review: The Rising by Ian Tregillis”