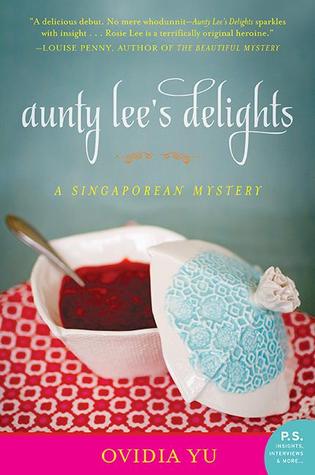 This delectable and witty mystery introduces Rosie "Aunty" Lee, feisty widow, amateur sleuth and proprietor of Singapore's best-loved home cooking restaurant
After losing her husband, Rosie Lee could easily have become one of Singapore's "tai tai," an idle rich lady devoted to mah-jongg and luxury shopping. Instead she threw herself into building a culinary empire from her restaurant, Aunty Lee's Delights, where spicy Singaporean home cooking is graciously served to locals and tourists alike. But when a body is found in one of Singapore's beautiful tourist havens, and when one of her wealthy guests fails to show at a dinner party, Aunty Lee knows that the two are likely connected.
The murder and disappearance throws together Aunty Lee's henpecked stepson Mark, his social-climbing wife Selina, a gay couple whose love is still illegal in Singapore, and an elderly Australian tourist couple whose visit-billed at first as a pleasure cruise-may mask a deeper purpose. Investigating the murder is rookie Police Commissioner Raja, who quickly discovers that the savvy and well-connected Aunty Lee can track down clues even better than local law enforcement.
Wise, witty and unusually charming, Aunty Lee's Delights is a spicy mystery about love, friendship and home cooking in Singapore, where money flows freely and people of many religions and ethnicities co-exist peacefully, but where tensions lurk just below the surface, sometimes with deadly results.

Following in the footsteps of Jane Marple, Mrs. Pollifax and Precious Ramotswe, Rosie Lee is a woman of a certain age who is constitutionally incapable of keeping her nose out of other people’s business – especially when that business is murder.

Everyone calls her Aunty Lee, and Aunty Lee’s Delights is the name of her restaurant and catering business. It seems to also be Aunty Lee’s delight to solve murders and fix people’s lives – to the point where she gets bored when running the restaurant is the only thing on her plate.

So it’s a real, if slightly perverse, treat when the body of a young woman washes up on the nearby shore. Aunty Lee can’t resist bringing up the mystery to everyone in her circle of family, friends and acquaintances, in the hope that someone knows more than the papers are telling about the late “Jane Doe”.

We also meet the cast of characters who both surround Aunty Lee and who are possible suspects in the case. Because it turns out that Aunty Lee, and everyone else involved in her stepson’s “wine and dine” business, knew the victim. The question hinges on which of them the late Laura Kwee knew much too much about.

And when another young woman’s body washes up on the shore, it’s up to Aunty Lee to expose the killer before he kills again – and before the police arrest one of their many possible suspects for a crime that they did not commit.

But in this case of secrets and lies, no one involved is quite who or what they claim to be, including the killer.

Escape Rating B: Aunty Lee’s Delights is the first book in the series by author Ovidia Yu. As a first book, it carries the weight of introducing all the continuing characters, as well as making Singapore come alive for readers who are not familiar with the city-state.

Her main character, Aunty Lee, is surrounded by family, friends and lifelong connections, some of whom are much more likeable than others. Rosie Lee is a bit of a different heroine – on the one hand, she is an elderly detective. On the other, she only acts old when it suits her purpose. At the same time, her lifelong membership in the upper class of Singapore gives her access to a wealth of social power and connections to people in high places.

Her own inner circle is close. Her companion and caregiver, Nina, helps her in the restaurant and with all her “cases”, sometimes whether Nina really wants to or not. Her stepson Mark is kind of sweet but completely ineffectual – he starts multiple businesses that never succeed, and Aunty Lee bails him out over and over. His wife Selina (Aunty Lee calls her Silly-Nah) seems to be a heartless bitch. I’ll confess to hoping that marriage doesn’t last. 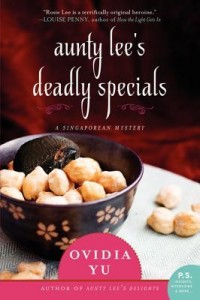 This turned out to be a fun and interesting story. I enjoyed the Singapore setting, it is new to me but the author brought it to life in a way that draws the unfamiliar reader into Aunty Lee’s world. It was also a refreshing change to read a mystery where the case is resolved with brain instead of brawn – or firearms. If you are looking for a different kind of mystery in a fresh setting, Aunty Lee’s Delights is a treat. I’m looking forward to diving in to the next book in the series, Aunty Lee’s Deadly Specials.

Warning to readers – do not read this book while hungry! The descriptions of the traditional Singaporean dishes that Aunty Lee cooks throughout the story all sound absolutely scrumptious, whether familiar or not. You’ll want to try everything!