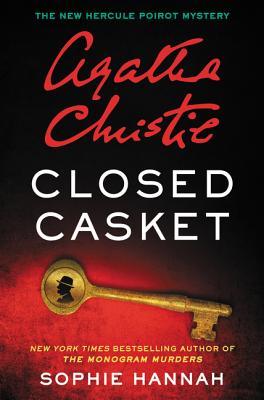 The world's most famous detective returns in this ingenious, stylish, and altogether delicious mystery from the author of the instant bestseller The Monogram Murders ("I was thrilled" -- Gillian Flynn).
"What I intend to say to you will come as a shock..."
With these words, Lady Athelinda Playford -- one of the world's most beloved children's authors -- springs a surprise on the lawyer entrusted with her will. As guests arrive for a party at her Irish mansion, Lady Playford has decided to cut off her two children without a penny . . . and leave her vast fortune to someone else: an invalid who has only weeks to live.
Among Lady Playford's visitors are two strangers: the famous Belgian detective Hercule Poirot, and Inspector Edward Catchpool of Scotland Yard. Neither knows why he has been invited -- until Poirot begins to wonder if Lady Playford expects a murder. But why does she seem so determined to provoke a killer? And why -- when the crime is committed despite Poirot's best efforts to stop it -- does the identity of the victim make no sense at all?
Addictive, ferociously clever, and packed with clues, wit, and murder, Closed Casket is a triumph from the author whose work is "as tricky as anything written by Agatha Christie" (Alexander McCall Smith, The New York Times Book Review). 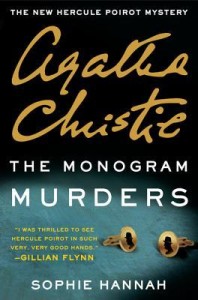 Just as in last year’s Poirot, The Monogram Murders, Closed Casket provides an extremely convoluted but incredibly fun trip back to the world of Agatha Christie’s most famous detective, the eccentric Belgian Hercule Poirot.

This case is somewhat of a direct followup to the one in The Monogram Murders. While none of the victims or suspects in that case reappear, Poirot’s young police friend and official cover, Edward Catchpool, is an integral part of this case as well.

And poor Catchpool, every time someone meets him, they refer back to that dreadful case. The solution was not dreadful at all, but Catchpool is all too aware that he did not exactly cover himself in glory, and all of the reporting on that case made his situation even worse. It was Poirot’s case, and the entire world knows it, much to Catchpool’s chagrin.

Which makes his discovery that Poirot has also been invited to Lady Athelinda Playford’s house party in Ireland both welcome and galling at the same time. Catchpool wants to solve whatever is about to happen all on his own, but he is aware that he still needs Poirot’s help. And he’s also just plain glad to see the irascible little fellow, especially as the other occupants of the household are less than agreeable. To say the least. Catchpool and Poirot have been dropped into the middle of a family melodrama, where everyone seems to be showing their worst side to everyone else.

Of course somebody ends up dead. And of course it is up to Poirot and Catchpool to figure out whodunnit.

Escape Rating B: This one is every bit as much fun as The Monogram Murders, and feels very much in the style of the later seasons of the Poirot series. Not only because Inspector Japp, Captain Hastings and Miss Lemon no longer seem to be members of Poirot’s inner circle, but also because the original mover of events, Lady Athelinda Playford, bears a sharp resemblance to Lady Ariadne Oliver of those later stories.

Lady Playford is the author of a series of children’s mystery books featuring her precocious ten-year-old heroine Shrimp Seddon. As Catchpool puts in, Shrimp is left to solve so many convoluted mysteries because the police assigned to the case are Inspector Imbecile and Sergeant Halfwit.

It’s a bit of irony that the pair of Irish gardai who come to investigate the real-life murder might double for the coppers in Shrimp Seddon’s adventures. Of course it is up to Poirot and Catchpool to handle the real investigation, over the stringent objections of their avatar of Inspector Imbecile.

Parts of this case are obvious from the beginning. Not so much the whodunnit as the why somebody dunnit. This is a case with motives aplenty. Nearly everyone wanted the dead man to be dead, albeit for different reasons. And the initial investigation rules out very few of the possibilities.

There are oodles of tempting red herrings, and all of them prove tasty to the investigation, at least for a time.

Much of this case revolves around psychology. The psychology of the killer, but mostly the psychology of the victim. The motives in the end would work as well in a 21st century thriller as they do this early-20th century murder mystery. But the melodrama is pure Poirot. 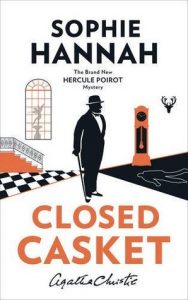 And just as with The Monogram Murders, the UK cover of Closed Casket does a much better job of capturing the Art Deco style that I associate with Poirot than the US cover. C’est la vie.