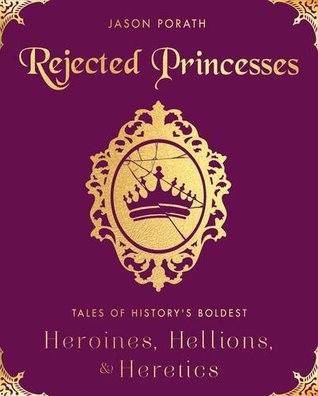 Blending the iconoclastic feminism of The Notorious RBG and the confident irreverence of Go the F**ck to Sleep, a brazen and empowering illustrated collection that celebrates inspirational badass women throughout history, based on the popular Tumblr blog.
Well-behaved women seldom make history. Good thing these women are far from well behaved . . .
Illustrated in a contemporary animation style, Rejected Princesses turns the ubiquitous "pretty pink princess" stereotype portrayed in movies, and on endless toys, books, and tutus on its head, paying homage instead to an awesome collection of strong, fierce, and yes, sometimes weird, women: warrior queens, soldiers, villains, spies, revolutionaries, and more who refused to behave and meekly accept their place.
An entertaining mix of biography, imagery, and humor written in a fresh, young, and riotous voice, this thoroughly researched exploration salutes these awesome women drawn from both historical and fantastical realms, including real life, literature, mythology, and folklore. Each profile features an eye-catching image of both heroic and villainous women in command from across history and around the world, from a princess-cum-pirate in fifth century Denmark, to a rebel preacher in 1630s Boston, to a bloodthirsty Hungarian countess, and a former prostitute who commanded a fleet of more than 70,000 men on China’s seas.

Think of this as the ultimate collection of fractured fairy tales, because this collection is fractured on a number of different axes, all of them worth thinking about.

Also, the whole thing is a terrific hoot. So if you are looking for a slightly ironic and occasionally a bit pained laugh, this book is well worth dipping into. Often.

Many of these stories are based on history, some a bit more loosely than others. And the rest are based in myths that are well-known but have been ignored by Western culture. Why, you ask? Because all of the stories in this collection feature women who acted in various ways outside of the norms that Western history wants to impose upon women.

Every one of the women in these stories lives up to the saying, “Well-behaved women seldom make history.” None of these women behaved well, and all of them made history. Even if, or especially because, it’s a history that the entrenched patriarchy wants to bury. After burning.

In case you can’t tell, reading this collection will definitely get your feminist dander way, way up. And that’s a good thing. These stories all need to be told. Because if we want girls to believe that they can be anything they set their minds and hearts to, we need to show them that it is possible to be more than just the few options that all of the media messaging tells them are available to girls and women.

The tone of Rejected Princesses is tongue-very-firmly-in-cheek. Although it reminds me of last year’s marvelous Cranky Ladies of History, the scope is much broader and the stories are much, much shorter, to the point of being vignettes rather than stories. But the Cranky Ladies had an observable bias towards stories with which most of us in Western societies, notably America, are already familiar with.

Porath’s scope is deliberately broader. The intent seems to be to illuminate all of the dusty and forgotten corners of history and legend that are occupied by women, from every continent and every time period. There are stories that feature women in ancient legends from the Norwegian fairy tale Tatterhood to the Brazilian legend of Iara to Xtabay from Mesoamerican mythology.

The historical figures are equally far ranging, from familiar names like Harriet Tubman and Anne Hutchinson in the US and Tomoe Gozen in 12th century China to Andamana in the 14th century Canary Islands and Alfhild in 5th century Denmark. The author has attempted to show the wide and varied range of women in history, from the Ancient Greeks and Egyptians to the 20th century around the globe.

If you are looking for a female historical figure relevant to any culture, any continent, any race and any era, she’s probably in here someplace, along with her sisters. I think that anyone could find a woman to identify with who relates directly to herself in some or many ways.

Not all of the women are heroes, either. The infamous Elizabeth Bathory is not the only villain featured between these pages. But the focus of the collection is to show the wide range of women in history, from heroes to villains, from slaves to owners, from commoners to queens. We’ve done it all. We just don’t get to see it all reflected in the history books.

Escape Rating B+: This collection is not intended to be definitive. And it is definitely not intended to be an authoritative historical treatise. That tongue-in-cheek style lends itself to a lot of humorous asides and more than a bit of breaking the fourth wall, where the author talks directly to the reader and not necessarily about the subject in hand.

One of the terrific things that the author has added to the collection is an attempt to provide trigger warnings and guide parents to stories that are or are not suitable to a particular child at a specific maturity level. Many of these stories, Elizabeth Bathory just keeps coming to mind, are not for the faint of heart (or stomach) or for a very young audience. An unfortunate number of famous women rose to fame or infamy after an awful lot of abuse of one kind or another, which may make their stories not exactly suitable for toddlers. When the author calls someone’s ex-husband “a crap sandwich” it’s not surprising that the story is not for the youngest audiences.

Based on the story, calling this particular ex “a crap sandwich” may possibly have been an insult to both crap and sandwiches.

But it is incredibly fun. If you are looking for something to whet your own on someone else’s appetite for diving into more women’s history, this is a great place to start. One final note to prospective readers; the illustrations in Rejected Princesses are terrific and often relevant to the story. Not historically accurate, but always interesting. Because of the illustrations, this is one book that is MUCH better read in print. Which also makes it easier to skim, a temptation that is nearly impossible to resist.