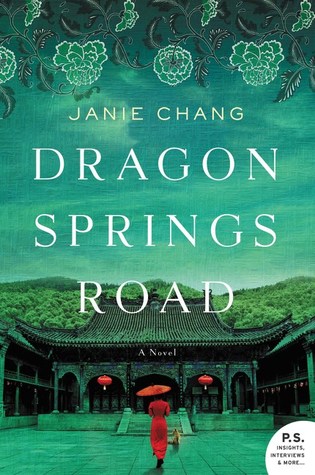 From the author of Three Souls comes a vividly imagined and haunting new novel set in early 20th century Shanghai—a story of friendship, heartbreak, and history that follows a young Eurasian orphan’s search for her long-lost mother.
That night I dreamed that I had wandered out to Dragon Springs Road all on my own, when a dreadful knowledge seized me that my mother had gone away never to return . . .
In 1908, Jialing is only seven years old when she is abandoned in the courtyard of a once-lavish estate outside Shanghai. Jialing is zazhong—Eurasian—and faces a lifetime of contempt from both Chinese and Europeans. Until now she’s led a secluded life behind courtyard walls, but without her mother’s protection, she can survive only if the estate’s new owners, the Yang family, agree to take her in.
Jialing finds allies in Anjuin, the eldest Yang daughter, and Fox, an animal spirit who has lived in the courtyard for centuries. But Jialing’s life as the Yangs’ bondservant changes unexpectedly when she befriends a young English girl who then mysteriously vanishes.
Murder, political intrigue, jealousy, forbidden love … Jialing confronts them all as she grows into womanhood during the tumultuous early years of the Chinese republic, always hopeful of finding her long-lost mother. Through every turn she is guided, both by Fox and by her own strength of spirit, away from the shadows of her past toward a very different fate, if she has the courage to accept it.

In a peculiar way, Dragon Springs Road reminds me a bit of Jade Dragon Mountain. Although both stories are set in China, their settings are 200 years apart. But the similarity is in the way that both stories managed to evoke a “you are there” feeling, at least for me. It was more than reading about something, it felt like being drawn into the story in both cases.

There was also a tiny element of The Tale of Shikanoko, even though Shikanoko is Japanese and not Chinese. In both that story and this one, there’s that sense of the mythic bleeding into the real. In the case of Dragon Springs Road, that mythic element is the fox spirit who protects Jialing and her mother during their residence on Dragon Springs Road.

Jialing believes that Fox is real, and she certainly seems to affect real things. But does she? As this story is told through Jialing’s eyes, we see things how she believes them to be, not necessarily how things are.

We also see a world that is in the process of change. Dragon Springs Road is in Shanghai, and the story takes place during the first two decades of the 20th century, through both the World War I years and the contentious early years of the Republic of China, as factions and warlords fought for power and against the rising tide of communism within, and Japanese imperial ambitions without.

As the story begins, Jialing is a little girl, one who has lived her entire life on the fringes of the Fong household on Dragon Springs Road. But things are not going well in the Fong household, and her mother, the concubine of the master of the house, is particularly vulnerable. Jialing is too young to understand any of this. All that she knows is that one day her mother goes away, leaving Jialing hiding in the decrepit outbuilding where they have lived.

And from that inauspicious beginning, Jialing is set adrift. She is very, very young. And she is mixed race, and therefore despised by both the Chinese and the Europeans. The household that moves into the Fong’s former residence take her in out of charity. And so she lives, dependent on the kindness of strangers, and knowing that she doesn’t belong anywhere, no matter how hard she tries.

Through the years, Jialing grows up. She makes friends, and enemies. She is fortunate enough to receive a Western education. But no matter how much she improves herself, all that anyone sees is the lowest of the low, a woman of mixed race.

The one thing that Jialing longs for above all others is to find her mother, and to discover why she was left behind all those years ago. And she does. Just as her entire world falls apart.

Be careful what you wish for. You might get it.

Escape Rating A: This is an absolutely lovely story that pulls the reader in and doesn’t let go until the end. It feels as if you are walking that road with Jialing, and not just reading about it. Stories that do that are rare and precious.

Dragon Springs Road is also a very quiet story. Jialing’s life is not the stuff of an adventure tale. She grows up, she does her best to serve, she watches and waits. Much of the action in this story happens to other people, as Jialing watches a second family overtaken by the bad luck that seems to haunt this one house.

And outside the gates, the world changes. Revolutions come, not just to China, but also to nearby Russia. The world that is coming is going to be very different from what has gone before. And Jialing becomes involved, but in the most unlikely of ways.

One of the threads that permeates this story is the prejudice that Jialing faces from all sides, and the ways that prejudice limits her choices. On all sides she is hemmed about by people who consider her less than dirt because she is neither fully Europeon nor fully Chinese. At a time and in a place where lineage is everything, she has none.

And yet she perseveres, making the best choice available to her. And we’re right there with her.

This is a book I simply loved. I was swept away at the beginning and left bereft at the end, gasping and flailing at my return to the real world. It feels like I was in a dream with the Fox, and she just turned me loose.

Dragon Springs Road is a book to get lost in. I loved it so much I’m having a difficult time articulating that love. Why don’t you pick up a copy and see for yourself!