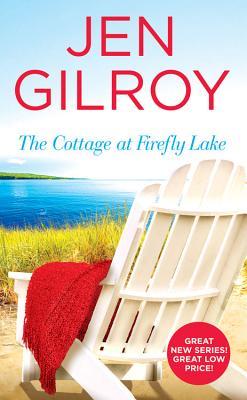 Some mistakes can never be fixed and some secrets never forgiven . . . but some loves can never be forgotten.
Charlotte Gibbs wants nothing more than to put the past behind her, once and for all. But now that she's back at Firefly Lake to sell her mother's cottage, the overwhelming flood of memories reminds her of what she's been missing. Sun-drenched days. Late-night kisses that still shake her to the core. The gentle breeze off the lake, the scent of pine in the air, and the promise of Sean's touch on her skin . . . True, she got her dream job traveling the world. But at what cost?
Sean Carmichael still doesn't know why Charlie disappeared that summer, but after eighteen years, a divorce, and a teenage son he loves more than anything in the world, he's still not over her. All this time and her body still fits against his like a glove. She walked away once when he needed her the most. How can he convince her to stay now?

Charlotte and Mia Gibbs have returned to Firefly Lake to sell their late mother’s cottage. It’s the place where they spent their summers, and it’s all they have left of their mother. It’s also a place they both love and resent, and now it represents a chance for both of them to get some financial security at the cost of losing their last connection to their mother.

And possibly their last real connection to each other.

Charlotte and Mia were “summer people” in the community, but for Charlie it was much, much more. Charlie didn’t feel like she fit in with her family, with her perfect homemaker mother and her seemingly equally perfect sister Mia. Instead, Charlie wanted adventure, and she spent those childhood summers with her best friend, local boy Sean Carmichael.

Their intense childhood friendship matured into an equally intense teenage love. But Sean was tied to Firefly Lake and the boat crafting and marina business that had been in his family for generations. Charlie was off to college and a career as a foreign correspondent. And even though she didn’t know exactly where she would end up, she knew at 18 that what she wanted was to travel and explore, not tie herself to the tiny Vermont lake town, no matter how much she loved it, or Sean.

But instead of a natural breakup over time and diverging interests, Charlie left Sean suddenly and inexplicably, and neither of them ever got over it. They’ve never gotten past the intensity of that teenage love, even though Charlie has had a terrific and exciting career, and Sean has been married (now divorced) and has a son turning 16.

There’s too much unfinished business between them.

Charlie and Mia need to sell the cottage. Badly. Mia fears that her husband is about to leave her with their two daughters and no career to fall back on. And she’s right. Charlie recently survived an IED attack while on assignment, and her insurance didn’t cover all the resulting medical bills. Her savings are tapped, and she is all too aware that she has no one to rely on in a crisis except her current shaky self.

But the only offer on the table is one that will change Firefly Lake forever, and not in a way that anyone wants. It’s up to Charlie to find a way to make things work – for the town, for her sister, for herself, and most of all, for any possible future she might have with Sean.

If he can get his head out of his ass long enough to finally figure out that he has to meet her halfway – wherever that might be.

Escape Rating B+: It was terrific to read something a bit light and fluffy after yesterday’s much more serious book. The Cottage at Firefly Lake was a great little pick-me-up.

It also felt more than a bit familiar.

Meanwhile, back in Vermont at Firefly Lake, this story is a lovely introduction to the place and to the series. It’s a story with several threads, and they blend together pretty well.

The big story isn’t the romance, it’s the relationship between sisters Charlie and Mia. They’re sisters, and they love each other, but they are also distant and don’t know each other. There’s also a whole lot of sisterly envy going on, as each of them believes that the other has the “perfect life” and each of them believes that the other had a happier, or at least easier, childhood and adolescence with their late parents.

And there’s a whole lot of family history bound up very interestingly in this story. Not just the Gibbs’ family, but also Sean’s family. And let’s just say that the late Dr. Gibbs was a real piece of work, with all of the negative connotations of that phrase. He’s still messing up everyone’s lives, even from the grave.

One of the great things about this story is the way that the romance develops. Even though Sean and Charlie never really got over each other, they also both recognize that they are not the same people they were half a lifetime ago. They don’t exactly take it slow, but they also don’t gloss over the fact that if they want to have a relationship, it has to be in this present and not the past. Nothing about this is easy.

There’s a lot to love at Firefly Lake. I’m looking forward to a return visit in Summer on Firefly Lake, appropriately scheduled for this summer.

Jen and Forever are giving away 10 paperback copies of The Cottage at Firefly Lake to lucky participants in this tour!

2 thoughts on “Review: The Cottage at Firefly Lake by Jen Gilroy + Giveaway”