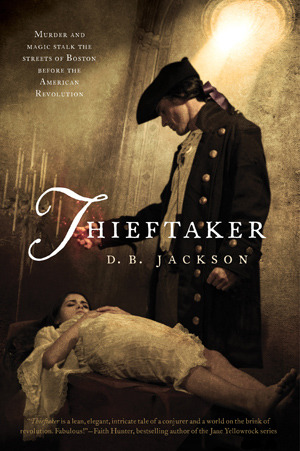 Boston, Province of Massachusetts Bay, August 26, 1765
A warm evening in colonial North America's leading city. Smoke drifts across the city, and with it the sound of voices raised in anger, of shattering glass and splintering wood. A mob is rioting in the streets, enraged by the newest outrage from Parliament: a Stamp Tax . Houses are destroyed, royal officials are burned in effigy. And on a deserted lane, a young girl is murdered.
Ethan Kaille, a thieftaker of some notoriety, and a conjurer of some skill, is hired by the girl's father to find her killer. Soon he is swept up in a storm of intrigue and magic, politics and treachery. The murder has drawn the notice of the lovely and deadly Sephira Pryce, a rival thieftaker in Boston; of powerful men in the royal government; of leaders of the American rebels, including Samuel Adams; and of a mysterious sorcerer who wields magic the likes of which Ethan has never encountered before.
To learn the truth of what happened that fateful night, Ethan must recover a stolen gem and sound the depths of conjurings he barely understands, all while evading Sephira and her henchmen, holding the royals and rebels at bay, and defending himself and those he loves from the shadowy conjurer.
No problem. Provided he doesn't get himself killed in the process.

Today is Presidents Day in the U.S. It seemed an appropriate occasion to go diving into the depths of the TBR pile and search for either something relevant, or at least something set in the Revolutionary period. Several friends have recommended the Thieftaker series to me, and this seemed like the perfect time to finally start it.

And all my friends were right. This thing is fantastic.

The series begins in 1767, during the period when Samuel Adams and his friends were just beginning to whisper of the colonies separating from England. But those whispers were still very, very quiet. However, the Townshend Revenue Act of 1767 changed those whispers into a slightly louder muttering. Adams and his cronies fostered boycotts and fomented riots. No one saw it at the time, except possibly Sam Adams himself, but it was the beginning of the end for the British in the still disunited thirteen colonies.

Our hero, and occasional anti-hero, is Ethan Kaille, a man with a very checkered past, and a frequently none-too-pristine present. He may have begun his life in England among the wealthier if not titled class, but time and circumstance have pressed him into scraping his living as a ‘thieftaker’ in the colonies.

Thieftaking is not even the least respectable of Ethan’s activities. He is also a conjurer, what some in that time and place call a witch, although he perceives a difference between those two words. And certainly the Salem Witch Trials, and similar “events’ that took place all over New England less than a century before, punished mostly women who were not actually conjurers. But the laws that convicted them are still very much on the books, and Ethan rightfully worries about just how many people in Boston are aware of his “gift”.

So when a wealthy merchant hires Ethan to find the thief who took his daughter’s necklace just before he killed her, Ethan knows all too well that he is not being hired for his skill at finding thieves. Whoever took that necklace, the girl died by conjuring. And it is up to Ethan to track down the villain before he kills again.

If he can. And if he can survive the powerful and deadly forces raised against him, both magical and mundane.

Escape Rating A-: Now I understand completely why my friends raved so much about this book. It is awesome. It both immerses the reader in its time and place and tells a powerful story.

The blend here is fascinating. The author bills this series as historical fantasy, rather than historical fiction. The fantastic element is, of course, Ethan’s conjuring. He does cast spells and they do work. Nor is he alone in his talent. In this world, while conjurers are rare, they do exist. And like all humans, some are more-or-less good and some are definitely less than good. People are people.

The story also blends historical personages and events with entirely fictional ones. The situation in Colonial America at this point in time was as the book portrays it. This was the beginning of the cry of “No Taxation Without Representation”. The course for Revolution had already begun, even if no one but the visionary Samuel Adams saw the path.

Readers who like this mixture of historical persons and events with “private detection” by brain rather than forensics will probably also enjoy Jeri Westerson’s Crispin Guest series. Crispin’s series is set earlier, and in England, and without the conjuring. But Crispin and Ethan would recognize each other as “brothers” and have much to share.

Ethan’s story, while not in the first-person, is very much his singular perspective. We see, hear and know only what he does. There’s no omniscient narrator describing events elsewhere. But Ethan’s journey of discovery is an interesting one. The only equivalent of all of our forensic tests that he has are his spells, and they are limited by his power and his knowledge. He has to know both how to ask and what to ask, and his inspiration sometimes fails him. He’s fallible and very human. 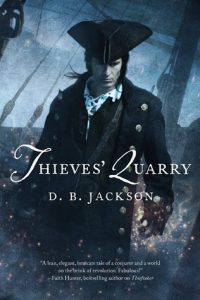 As much as I enjoyed this book, I did have one frustration with it. There’s something about the character of Ethan’s chief rival, the beautiful thieftaker Sephira Pryce, that felt a bit “off” to me. Not that a woman couldn’t be the rival or the villain. Nor that she would be perfectly capable of running what appears to be the Colonial equivalent of an organized crime ring. But in her personal actions she comes off as petulant and childish. And the person with those characteristics so pronounced doesn’t seem like the same person who could be running her gang with such ruthless aplomb.

However my discomfort with Sephira’s character was not enough to keep me from wanting to dive eagerly into book two of this series, Thieves’ Quarry, as soon as I can possibly manage! 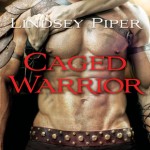 Review: All the Devils Are Here by Louise Penny
A Clockwork Christmas