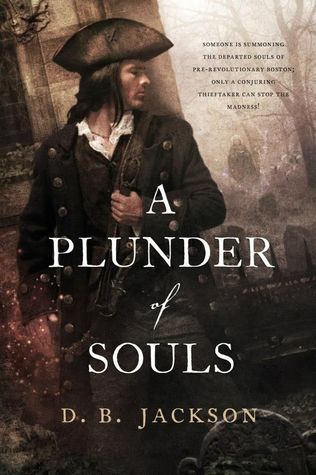 Boston, 1769: Ethan Kaille, a Boston thieftaker who uses his conjuring to catch criminals, has snared villans and defeated magic that would have daunted a lesser man. What starts out as a mysterious phenomenon that has local ministers confused becomes something far more serious.

A ruthless, extremely powerful conjurer seeks to wake the souls of the dead to wreak a terrible revenge on all who oppose him. Kaille's minister friends have been helpless to stop crimes against their church. Graves have been desecrated in a bizarre, ritualistic way. Equally disturbing are reports of recently deceased citizens of Boston reappearing as grotesquely disfigured shades, seemingly having been disturbed from their eternal rest, and now frightening those who had been nearest to them in life. But most personally troubling to Kaille is a terrible waning of his ability to conjure. He knows all these are related…but how?

When Ethan discovers the source of this trouble, he realizes that his conjure powers and those of his friends will not be enough to stop a madman from becoming all-powerful. But somehow, using his wits, his powers, and every other resource he can muster, Ethan must thwart the monster's terrible plan and restore the restless souls of the dead to the peace of the grave. Let the battle for souls begin in A Plunder of Souls, the third, stand-alone novel in Jackson's acclaimed Thieftaker series.

Today is Presidents Day, so I went searching through the towering TBR pile to find something set in the Revolutionary period. (Yes, I know that Presidents Day celebrates both Washington and Lincoln, but I’m still listening to the utterly marvelous Grant by Ron Chernow, and therefore have all the Civil War I can handle at the moment.) 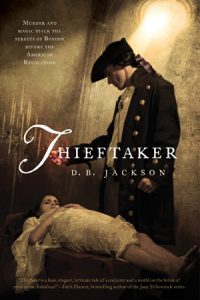 Which brought me back to the Thieftaker Chronicles and A Plunder of Souls. I read Thieftaker last year for this holiday, and loved it so much I dove into the next book in the series, Thieves’ Quarry, perhaps a bit too soon.

So after most of a year, I’m back to this series. And A Plunder of Souls did not disappoint. Far from it.

The setting for the series is so well done that the reader feels as though they are walking the streets of pre-Revolutionary Boston with Ethan Kaille, complete with seeing the sights and even smelling the smells. If you like your historical fiction and mysteries to give you that “you are there” feeling, this series certainly does that well.

But the Thieftaker Chronicles are not merely historical fiction, and they aren’t quite historical mysteries, although there is usually a mysterious element to the story. The author bills this series as “historical fantasy” because he has taken pre-Revolutionary America and added two elements, one slightly ahistorical, and one definitely fantastic.

Although there were thieftakers in Boston in the colonial period, there were none recorded in Boston during the time the series takes place. What Ethan does for a living is fairly obvious from the name – people hire him to find something that has been stolen, and/or to find the person who stole it.

But the fantasy element comes very much into play in this entry in the series. Ethan is a “speller”, or conjurer. In Salem a century before, he’d have been labeled a “witch” and probably hung, burned, drowned or pressed for it. Ethan can cast spells, and he’s not the only one in Boston who can.

The case that Ethan is hired to investigate is a particularly grisly one. Someone is vandalizing graves of the recently deceased and violating the corpses. The head and right hand of each corpse has been removed, an article of clothing has been stolen, a strange symbol has been carved over the heart of each corpse, and, in a particularly nasty message to Ethan himself, three toes have been cut off of each corpse’s left foot – just as Ethan had those same toes removed years ago.

It’s not just the mutilated bodies that have the local churches and cemeteries in an uproar. The ghosts of the violated dead are returning to their homes, looking just as they currently do in their graves.

And whatever or whoever is bringing back the dead, they are also doing something that draws power away from all the spellers in town. Ethan’s powers are no longer reliable, nor are those of his friends and colleagues.

As the spirits multiply, Ethan finds himself banding together with old friends and even old enemies in order to bring down a mad spellcaster with a taste for power – and revenge.

Escape Rating A-: I read this in a single day. I started it thinking I’d finish it on the plane home from DC, but in the end I just couldn’t wait that long. I got sucked in and didn’t get spit out until the end.

The author brings this historical period alive in a way that makes the reader feel as if they are walking the streets with Ethan. Amazingly, it’s not done by introducing a host of real historical characters, although there are a few historical figures whose work intersects with Ethan’s. It’s more that the story is so steeped in historical details that the reader can’t help but be drawn in, while at the same time that wealth of detail never drags down the story.

As a character Ethan is certainly interesting to follow. He is very thoughtful about his life and his situation. Part of what makes him different is that he does not see himself particularly as a hero, more as someone who is often swept along by events who does the best he can. Ethan is also middle-aged for his time, in his early 40s. The years are catching up with him, and he’s not sure how much longer he can continue as a thieftaker – especially since the increasing presence of British troops (the Redcoats really are coming) has depressed business considerably. With so many soldiers on the streets, the small time crooks who are Ethan’s bread and butter are laying very, very low.

This particular entry in the series is steeped in magic. The crime, while not magical in itself, is done with magical purpose. Ethan finds himself at a crossroads, seeing that his spells are failing,realizing just how dependent he is on his ability to conjure, and uncertain of what to do if his talents fail him. 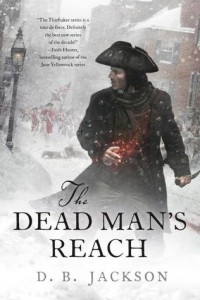 His enemy this time is thankfully not Sephira Pryce. Her character does not feel as real to me as others in the series, and every time she appears I feel myself gritting my teeth. On the other hand, the villain of A Plunder of Souls is just a bit over the top – and he’s barking mad into the bargain. Very powerful, but also completely nuckin’ futz. He’s very scary and also a bit unfocused.

And apparently the villain in the next and final book in the series, Dead Man’s Reach, as well. I’ll be glad to see the back of this particular character, but very, very sorry to see this series end.

4 thoughts on “Review: A Plunder of Souls by D.B. Jackson”