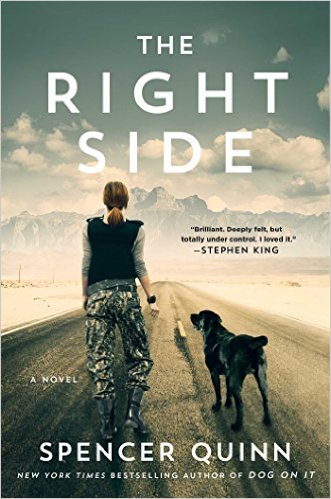 LeAnne Hogan went to Afghanistan as a rising star in the military, and came back a much lesser person, mentally and physically. Now missing an eye and with half her face badly scarred, she can barely remember the disastrous desert operation that almost killed her. She is confused, angry, and suspects the fault is hers, even though nobody will come out and say it.
Shattered by one last blow—the sudden death of her hospital roommate, Marci—LeAnne finds herself on a fateful drive across the country, reflecting on her past and seeing no future. Her native land is now unfamiliar, recast in shadow by her one good eye, her damaged psyche, and her weakened body. Arriving in the rain-soaked small town in Washington state that Marci had called home, she makes a troubling discovery: Marci’s eight-year-old daughter has vanished. When a stray dog—a powerful, dark, unreadable creature, no one’s idea of a pet—seems to adopt LeAnne, a surprising connection is formed and something shifts inside her. As she becomes obsessed with finding Marci’s daughter, LeAnne and her inscrutable canine companion are drawn into danger as dark and menacing as her last Afghan mission. This time she has a strange but loyal fellow traveler protecting her blind side.

This wasn’t quite what I expected. That doesn’t mean it wasn’t good, because it was, but it doesn’t quite match the description.

This is way, way more about LeAnne than it is about the dog, or anything related to the dog. Which is kind of a pity, because it’s only when Goody adopts LeAnne that the story really kicks into gear.

But LeAnne’s life before Goody is even more important to the story than her life with dog. And a whole lot sadder.

LeAnne was an elite soldier in Afghanistan, until one catastrophic incident left her a broken shell of herself. She’s lost an eye, and that’s terrible and will change everything she ever thought she was or would be. But more importantly, LeAnne left that battlefield with a piece of shrapnel in her head, and as a consequence LeAnne’s memories, of herself, her past and even very recent events, are more than a bit shaky.

LeAnne is the ultimate unreliable narrator – she’s fooling herself and most of the time she doesn’t know it. Even when she does know it, she doesn’t care.

The story is really LeAnne’s search for herself. Not the self she was, possibly not even the self she will be, but simply a self that she can live with. And as much as she can’t admit it, even to herself, she needs someone to protect her blind side – not just the physical one, but also all the blind sides within herself.

I want to say that this is a road story, but it kind of is and kind of isn’t. When LeAnne’s rehab roommate at Walter Reed Army Hospital dies suddenly and very unexpectedly, LeAnne breaks out of the hospital. Marci’s death is the last straw for LeAnne’s shaky sense of self, and she just lights out of there. And goes cold turkey on ALL her meds.

But the Army isn’t done with her. She has one last service to perform. But first they have to find her and convince her that she needs to open her box of bad memories. And that bit of her past is the one place she doesn’t want to go.

Escape Rating B: The story felt like it was divided into two separate and not quite equal parts, before dog and after dog. The parts of LeAnne’s journey before Goody adopts her (and the dog is definitely the prime mover of events) are pretty damn grim. LeAnne is physically and emotionally devastated, to the point where she is not always aware of just how bad things really are.

She loses days at a time. Sometimes in disjointed memory, sometimes in sleep, sometimes just in a fog. She’s lost who she was, and can’t always manage to acknowledge it. She’s also drifting and rudderless. It’s a hard journey, and it makes for hard reading. Considering how much driving she does while not quite all there, it’s amazing that she doesn’t die in a car accident. On that other hand, the very used Honda that she’s driving probably can’t get up enough speed to cause more than a fender-bender.

Just as an aside, LeAnne’s mother is a piece of work.

But it is only when LeAnne drifts into Marci’s old hometown that LeAnne begins to pick up the pieces of what her life can be now. She starts finding her new self. Partly with her self-assigned mission to find Marci’s missing daughter, but mostly because Goody adopts her.

In the best “dog saves human” tradition, Goody worms her way into LeAnne’s life, and eventually her battered heart (and psyche). Goody’s interventions keep her from letting all of her more destructive impulses out (the sheriff deserves the verbal abuse LeAnne doles out, just not quite the broken neck she wants to give him).

And even though she can’t take Goody with her, it does seem like it is Goody who gives her enough strength to deal with the most important unfinished business of her past. And whose assistance allows her to finally let go of some of her demons.

The rest she is willing to take on the road with them.

This is a hard book to love, because LeAnne is a difficult character to like. It’s not that the reader doesn’t feel sorry for her, because one certainly does, but the kind of pity she initially engenders does not necessarily make one want to read about her struggles in detail, especially when there are so few triumphs to balance them out. It reads as real, but also depressing as hell. It’s only when Goody appears on the scene that the story turns outward, from endless anger and angst to coping with her world as it is that the story begins to lift.

The story ends on a high note, but it’s a long, dark journey to reach that brighter place.

The author is giving away 3 copies of The Right Side to lucky entrants on this tour.

4 thoughts on “Review: The Right Side by Spencer Quinn + Giveaway”