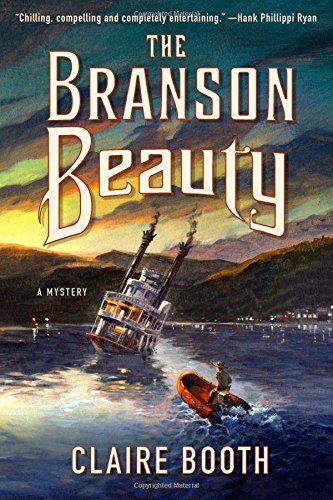 The Branson Beauty, an old showboat, has crashed in the waters of an Ozark mountain lake just outside the popular tourist destination of Branson, Missouri. More than one hundred people are trapped aboard. Hank Worth is still settling into his new role as county sheriff, and when he responds to the emergency call, he knows he’s in for a long winter day of helping elderly people into rafts and bringing them ashore. He realizes that he’ll face anxiety, arguments, and extra costs for emergency equipment that will stretch the county’s already thin budget to the breaking point.
But he is absolutely not expecting to discover high school track star Mandy Bryson’s body locked inside the Captain’s private dining room. Suddenly, Hank finds himself embroiled in a murder investigation, with the county commissioner breathing down his neck and the threat of an election year ahead of him. And as he wades deeper into the investigation, Hank starts to realize he’s up against a web of small town secrets much darker and more tangled than he could have ever imagined.
In her captivating debut novel, Claire Booth has created a broad cast of wonderfully compelling characters, and she perfectly blends humor with the emotional drama and heartache of a murder investigation.

The Branson Beauty is an old paddle-wheel showboat, and the book about the events of her last cruise will stick the reader as fast between its pages as the poor old boat is stuck to the shoal its grounded on.

It really was supposed to be a “three-hour tour”, so when the Branson Beauty runs aground, and her passengers find themselves stranded aboard for much, much longer, the number of rescue workers who end up humming the Gilligan’s Island theme seem inevitable. Also hilarious.

Mandy Bryson was supposed to be away at college in Norman Oklahoma, running track and studying English at Oklahoma University, not dead on an aging cruise ship with finger-shaped bruises clearly circling her throat.

Worth is literally the new sheriff in town. When the previous sheriff moved up to the state legislature, his term as sheriff needed to be filled. Hank, an experienced officer from Kansas City, thought he was ready for a management role. He was certainly ready to move from KC to Branson, where his father-in-law was available to serve as a live-in babysitter for Hank and his wife Maggie’s children. Maggie is on constant call as a surgeon in the local hospital, and Hank’s hours as sheriff are far from predictable at the best of times. Her father needs a bit of their help, and they need heaping helpings of his.

Between the grounding of a local institution, and the murder of a home-town heroine, Hank has his hands overfull. This is his first homicide in Branson, and the first local homicide in a long time that wasn’t a screamingly easy case to solve of drug deals gone wrong or domestic battery gone deadly.

This case is a puzzle from beginning to end, not because the victim had no enemies, but because there are too many competing means, motives and even crimes for Hank to zero in on what parts thwarted young love, stalking, affluenza and insurance fraud played in Mandy’s death.

Or perhaps all of them did.

Escape Rating A-: This one grabbed me from the first undertone hum of “a three-hour tour” and didn’t let me go until I turned the final page. The mystery at the heart of this story kept me turning pages every spare minute all day long.

And that mystery is convoluted as it unfolds, but makes complete sense once it is all revealed. It kept me guessing from beginning to end. The red herrings are all delicious, and all the more convincing for often being partially correct while not necessarily contributing to the solution of the whole.

The author also does an excellent job of conveying the depths of the grief and sadness that consumes not just the family but the whole small community when a young and promising life is cut short so senselessly.

But The Branson Beauty, in addition to being a crackerjack mystery, is also the first book in a new series, and has to introduce its setting and its characters, preparing readers for the stories yet to come. We need to learn who these people are, and why we should care about what happens to them.

In that regard, The Branson Beauty is off to a good start, but there is plenty of work yet to do. This case is overwhelming, and Hank Worth is often overwhelmed by it as well as the responsibilities he has taken on as the sheriff of Branson. He’s still adjusting to his new job and to the small town politics he now must contend with. When his appointment is up in a few short months, Hank will need to run for re-election. To do that he not only has to please his constituents, but has to learn to play with the politicians who are both his peers and his rivals, and in some cases even his bosses. The county commissioners, after all, set his budget.

So while there’s a murder to be solved, that’s not the only crime that Hank uncovers, nor is it the only trail he has to follow. Some of those trails lead him into the murky undergrowth of political corruption and influence peddling, and the reality that the county’s biggest employer has too many ways of influencing people and institutions to look the other way as he bends and even breaks the law. Hank has a tough road ahead of him, and he’s only taken the first steps – possibly even the wrong ones. 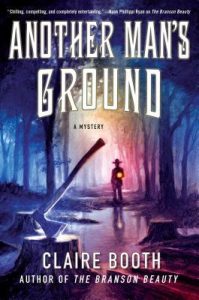 The one place where The Branson Beauty needs a little work is in the development of the characters who inhabit Hank’s world. Only one member of his police force stands out, and only because she seems to be the lone female in the ranks, even if she is Hank’s second-in-command. Likewise, it took me quite a ways into the book to figure out whether the female at home Hank referred to was his wife or his daughter, and what she did and where she fit. (It’s his wife and she’s as overworked as he is) I left the story still not certain what the precipitating event was that sent Hank and Maggie to Branson, but I know there was one. I’m looking forward to discovering the answers to all these questions and more in future books. The next book in the series, Another Man’s Ground, is already on my reading schedule this month.

While the boat may have run aground, the story never does. It chugs along quickly and compellingly from its comic opera beginnings to its inevitably sad but ultimately satisfying resolution. I can’t wait to see what mystery Hank has to solve next.

One thought on “Review: The Branson Beauty by Claire Booth”