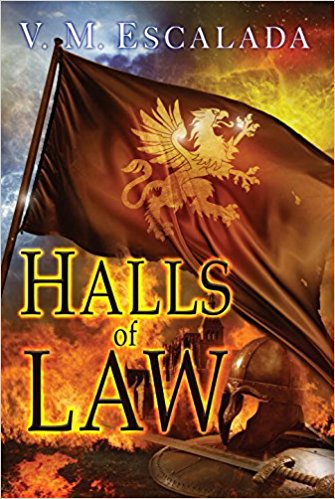 The Faraman Polity was created by the first Luqs, and has been ruled for generations by those of the Luqs bloodline. It is a burgeoning empire maintained by the combined efforts of the standing military force and the Talents of the Halls of Law. While the military preserves and protects, it is the Halls' Talents—those gifted from birth with magical abilities—who serve as the agents and judges of the Law. For no one can successfully lie to a Talent. Not only can they read people by the briefest of physical contacts, but they can also read objects, able to find information about anyone who has ever come into direct contact with that object. Thanks to the Talents and the career military, the Polity has long remained a stable and successful society. But all that is about to change.
Seventeen-year-old Kerida Nast has always wanted a career in the military, just like the rest of her family. So when her Talent is discovered, and she knows she'll have to spend the rest of her life as a psychic for the Halls of Law, Ker isn't happy about it. Anyone entering the Halls must give up all personal connection with the outside world, losing their family and friends permanently. Just as Kerida is beginning to reconcile herself to her new role, the Polity is invaded by strangers from Halia, who begin a systematic campaign of destruction against the Halls, killing every last Talent they can find.
Kerida manages to escape, falling in with Tel Cursar, a young soldier fleeing the battle, which saw the deaths of the royal family. Having no obvious heir to the throne, no new ruler to rally behind, the military leaders will be divided, unable to act quickly enough to save the empire. And with the Halls being burned to the ground, and the Talents slaughtered, the Rule of Law will be shattered.
To avoid the invaders, Kerida and Tel are forced to enter old mining tunnels in a desperate attempt to carry word of the invaders to Halls and military posts that have not yet been attacked. But the tunnels hide a dangerous secret, a long-hidden colony of Feelers—paranormal outcasts shut away from the world for so long they are considered mythical. These traditional enemies of the Halls of Law welcome Kerida, believing she fulfills a Prophecy they were given centuries before by the lost race of griffins. With the help of these new allies, Kerida and Tel stand a chance of outdistancing the invaders and reaching their own troops. However, that is only the start of what will become a frantic mission to learn whether any heir to the throne remains, no matter how distant in the bloodline. Should they discover such a person, they will have to find the heir before the Halian invaders do. For if the Halians capture the future Luqs, it will spell the end of the Faraman Polity and the Rule of Law.

If you are looking for a new epic fantasy series to sink your reading teeth into, and where you can get in at the very beginning without having to read through a huge pile of doorstop-sized books, Halls of Law is definitely a winner.

It’s also an epic fantasy for the 21st century, where we have an absolutely marvelous heroine’s journey from the outset, as well as a hero’s journey that looks like it will take us to some fascinating places.

Our point of view character is Kerida Nast. All her life she’s wanted to be a soldier, just like everyone else in her family since pretty much the dawn of time. But unfortunately for Kerida, and it looks like fortunately for the rest of Faraman Polity, Ker is a Talent, definitely with that capital T, and Talents are special.

Ker turns out to be a lot more special than most.

Talents in the Faraman Polity are psychics, born with a gift that seems to be a lot like psychometry. When a Talent touches an object, they can read the entire history of that object, AND, most importantly AND, they can read the current status and even whereabouts of all the people who have been involved with that object. And they can read people the same way.

No one can hide the truth from a Talent. Which has made the Talents, over time, the instruments and enforcers of the rule of law. They are the law.

But in order to be impartial enforcers of the law, Talents are separated from the rest of the Polity. Once their gift is discovered they are taken from their families, not just for training, but for life, and forced to cut all ties to the rest of the world and renounce all titles and inheritances.

Ker finds it a cage, sometimes gilded, sometimes lined with shit. Or at least with encrusted oatmeal. But just as she realizes that she can make a new and good life for herself within the ranks of the Talented, disaster strikes, and she is forced to combine her new abilities with her old skills as a soldier.

And that’s where this utterly marvelous story truly takes wing. On the back of a griffin.

Escape Rating A-: This is a terrific story, but I have to say that it isn’t really anything truly new in the realms of epic fantasy. For those who have read a fair bit in the genre, there are plenty of recognizable tropes. However, those tropes are put together in some unusual ways.

Throwing more than a bit of The Handmaid’s Tale into a completely epic fantasy setting gives the story many of its chills, and makes the evil that our good Kerida fights particularly malevolent. Her enemies, the Halia, seem to embody the worst of everything that makes Men’s Rights Activists so foul, while embodying their deep misogyny into an epic fantasy setting and adding a few additional twists to make things that much scarier, and the stakes that much higher for our heroes.

But in the best heroine’s journey tradition, the story follows Kerida as she discovers who she is and what she is capable of. She finds herself at the center of events that will not just hopefully drive out the enemy, but also re-shape her world for the better. If she survives – and succeeds.

An outcome that is never certain. When Halls of Law ends, Ker has merely completed the opening stages of the prophecy that she and her companions must fulfill. And the odds are firmly stacked against them.

I can’t wait to find out happens next! 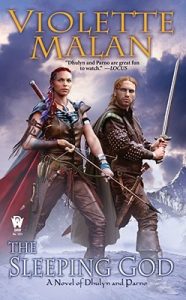 Reviewer’s Note: V.M. Escalada was billed as a debut author in the material I received for my Library Journal Science Fiction and Fantasy article, Galaxy Quests. I chose to read Halls of Law because the information provided about the book sounded so good, and the book certainly was good. I’m glad I read it. But, and for me this feels like a very big but, V.M. Escalada is not, after all, a debut author. Rather, this is a new pen name for author Violette Malan. I loved her Dhulyn and Parno series, which begins with The Sleeping God. I’m thrilled to have something new by her, I wondered where she went. But a new pen name does not a debut author make, and I feel like I was misled in the materials for that article, and that I, in turn, misled the readers of the article. Next time I’ll do more research. 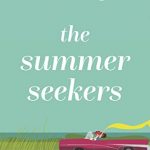 4 thoughts on “Review: Halls of Law by V.M. Escalada”