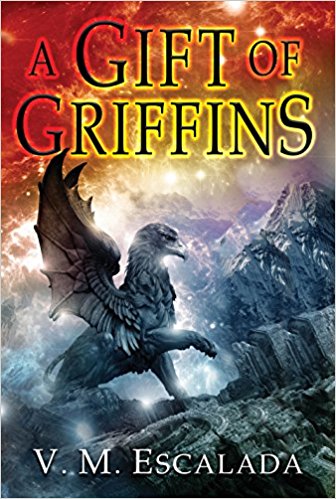 The second book in the Faraman Prophecy epic fantasy series returns to a world of military might and magical Talents as Kerida Nast continues the quest to save her nation.

Kerida Nast and her companions have succeeded in finding Jerek Brightwing, the new Luqs of Farama, and uniting him with a part of his Battle Wings, but not all their problems have been solved. Farama is still in the hands of the Halian invaders and their Shekayrin, and it's going to take magical as well as military strength to overcome them.

Unexpected help comes from Bakura, the Princess Imperial of the Halians, whose Gifts have been suppressed. As the Voice of her brother the Sky Emperor she has some political power over the Halian military, and she will use it to aid the Faramans, if Kerida can free her from what she sees as a prison. But whether Kerida can help the princess remains to be seen. If she succeeds, Bakura may prove their salvation. But should Kerida fail, all may be lost.... 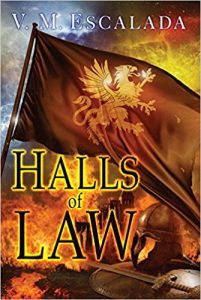 Gift of Griffins is the direct followup to last year’s terrific Halls of Law. The action in Gift picks up right where Halls leaves off, and the two books as a whole feel like one single story that was just too long to fit into a single volume. So the author committed duology.

Gift makes no sense whatsoever without Halls. Consider yourself warned.

The story told in the two, however, is a lot of fun. This is epic fantasy that plays with some of the standard tropes in neat twisty ways.

Our point of view character is Kerida Nast. Ker was planning to be a soldier, like pretty much all of the women and men in her family before her. Two of her older sisters have risen to high rank in the Faraman military, and Ker expects to follow in their bootsteps.

So from the very beginning, the story feels like a heroine’s journey rather than a hero’s journey. One of the truly neat things about the story is the way that it turns out that Ker Nast is not the heroine whose journey fulfills the epic prophesy and saves the day.

Ker is only a piece, admittedly a big piece, of the prophecy that kicks the invaders out of the Faraman Peninsula and brings the mythic griffins back to their long abandoned home.

As we discover in Gift of Griffins, all of the various magics used by the human population of this world were literally gifted to them by the griffins centuries if no millennia ago. But humans being human, pretty much the first thing those magic users did was band into tribes based on exactly which kinds of magic they used in exactly what way. Then they bickered amongst themselves until, humans being human again, wars broke out, different groups gained ascendancy, and then ruthlessly tried to wipe out whichever faction was sucking hind tit.

Humans do kind of suck sometimes. The griffins, taking the very (very, very) long view, are none too happy with the way that their gift is being abused.

So when Ker finds their stronghold, courtesy of her friend Wiemark – a very, very young griffin that she found and “woke” in the griffins old ancestral home – the griffins tell her to solve her own problems and refuse to let Wiemark go back with her to help her.

Ker has a lot of problems to solve. Her homeland has been invaded by the forces of the Sky Emperor of Halia across the ocean, along with their mages. The Halians believe that women are chattel, and therefore maraud through Faraman killing every woman they see who does not immediately obey their every command – as well as all the women in the military because of course women bearing arms is absolute anathema.

They also kill every single Faraman mage (called Talents) that they find. Because Faraman magic is also utterly corrupt – because they believe it is used by women to deceive and enslave men.

(Any commentary on any contemporary groups, issues or problems feels intentional to this reader. Your mileage may vary.)

Ker, along with the friends and allies that she has gathered along her journey, has to figure out a way to defeat a force of magic users who specialize in mind control – and are all too proficient at it.

But she has an unexpected ally – in the middle of the enemy stronghold. If she can be rescued. If they can join forces. If Faraman can be saved. If the prophecy can be brought to fruition.

The odds are long, the stakes are high – and not everything is quite the way it seems.

Escape Rating B+: On the one hand, it is very nice indeed to have an epic fantasy that seems to be complete in merely two books – and only a year apart at that. On the other hand, the ending felt a bit rushed. It seemed like Ker was still getting her allies lined up when the villains essentially delivered themselves into her waiting (and fully armored) arms.

Not that I wasn’t perfectly happy to see more-or-less good triumph and for definitely evil to get its just desserts – but it felt like 1.9 books of build up and only .1 books of resolution. It felt like the ending happened awfully fast. I wasn’t ready and it didn’t feel like they were, either.

Again, not that they are supposed to be so fully ready that the final battle turns out to be a cakewalk – but they didn’t feel quite ready enough.

On my third hand (so, I’m an alien – or Kali the Destroyer. Sue me if you dare! BWAHAHAHAHA) and not that Ker and her allies couldn’t have used Kali’s power, one of the things I really liked about Gift of Griffins was the discover that while Ker is part of the prophecy, she is not the usual “prophesied one” or “chosen one” who is supposed to save the day. And that the “chosen one” in this story was also a woman and not the boy king – a character who does exist in this story and does help but is also just part of the prophecy and not its culmination.

The characters, well, the ones on the side of the angels at least, are all interesting and Ker in particular is a lot of fun to follow. One of the things that also makes this story work, at least for me, is that Ker’s side, while it is manifestly better than the villains, is never claimed to be perfect. Ker’s people have certainly done their share of murder and suppression, just not on the grand and horrific scale that the Halians are engaging in.

That the Halians turn out to not be the cookie-cutter villains they first appear to be makes the story just that much more involving.

That Ker is working to restore a system that may very well separate her from the man she loves, because it is a better system overall for everyone else, is a big and interesting part of her internal conflict – and we like her because of it. We want her to both help save the day and find a way to keep her own personal happiness.