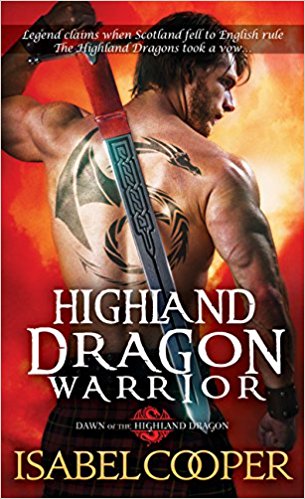 Legend claims
When Scotland fell to English rule
The Highland dragons took a vow:
Freedom at any price.

The war may be over, but so long as English magic controls the Highlands, not even a dragon laird can keep his clan safe. What Cathal MacAlasdair needs is a warrior fierce enough to risk everything, yet gifted enough to outwit an enemy more monster than man.
What he needs is Sophia.
Alchemist Sophia Metzger traveled to Loch Arach in search of knowledge. She never dreamed she'd learn to do battle, ride through the stars on the back of a dragon, or catch the eye of a Highland laird. But as her quest turns to sizzling chemistry and inescapable danger, she'll soon discover the thrill of being caught in a dragon's claws. 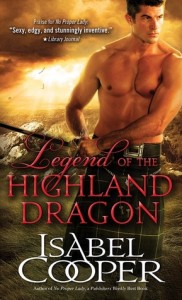 But Highland Dragon Warrior isn’t a followup. Instead, it’s the beginning of a prequel series. Instead of the very tail end of the 19th century, this story is set at the very beginning of the 14th century. The world is a very different place. Thinking about it, this series might be the story of that “legend” that Legend of the Highland Dragon barely touches on.

This feels like a bit of an alternate 14th century. Dragons aren’t the only otherworldly creatures that walk (or fly, in this case) the earth we know from history. Magic works as well, and there are both good and evil practitioners of it. And, possibly because this is the 14th century and mysticism of all sorts existed in real history, alchemy works too.

Our heroine is an alchemist. She is also a world traveler in an era when travel was very difficult at the best of times and women seldom traveled at all. But Sophia Metzger is an exception in a number of ways. She’s a woman, she’s a practicing alchemist, and she’s Jewish at a time when Jews were systematically being expelled from every country in Europe.

It is dangerous for her to travel, particularly through England, where the Jews were expelled only a century before. (This is real history, not fabricated for this story) Sophia hides who she is at every turn, because exposure will mean censure at best, and death at worst. But she has heard a rumor that the MacAlasdairs are dragons, and she wants to see if their scales can provide powerful catalysts for her alchemical potions.

When Sophia and her friend and chaperone Alice arrive at Loch Arrach, she comes at just the right time for Cathal MacAlasdair. He’s had an unfortunate encounter with an evil wizard, who has taken the spirit of his best friend hostage. All the mage wants in return is Cathal’s service. The service of a powerful dragon. Cathal knows that he can’t give in, and doesn’t want to. He recognizes evil when he sees it. But that doesn’t mean he doesn’t want to save his best friend if he can do it without submitting to the wizard.

And that’s where Sophia comes in. He’ll give her a few of his scales for her experiments, if she promises to do her best to save his friend. He’s not even half as unreasonable as he could be. Cathal knows the odds are stacked against them. He only asks that she try, and that she be honest about those trials.

Sophia can’t resist the challenge. And when the wizard starts coming for her, she meets that challenge as well, with every ounce of skill and intelligence at her disposal.

But when Cathal comes for her heart, she resists at every turn. She knows it’s not possible for a laird’s son to marry a Jew, and she is, above all, an honorable woman. But neither of them can resist what’s meant to be, no matter what stands in their way.

Escape Rating B: Highland Dragon Warrior, in spite of its hard-charging title, is a slow-burn, slow-build kind of story on every front. The plot takes a long time to develop, and so does the romance.

The pacing resembles that of Sophia’s alchemical potion-making. Everything has to happen at the right time, in the right place, under the right influences. This isn’t Harry Potter, where potions seem to brew in minutes or at most hours. All of Sophia’s potions take days and even weeks to come to fruition, and the story moves at that pace.

So as much as I liked Highland Dragon Warrior, I can’t claim that it’s a page-turner, at least not until the final 15% of the story, where Sophia confronts the evil wizard.

But I really did like this story. I think one of the big reasons for that is the character of Sophia. We don’t see many Jewish characters in mainstream fiction, and we particularly don’t see many Jewish heroines in romance, neither contemporary nor historical. So one of the reasons that I really liked being inside Sophia’s head was that I could see myself in her in ways that don’t happen often.

As difficult as it was for a woman to be an intellectual, or to travel in her time, for Sophia there is always an added layer of danger because of her faith. And she is always aware that some people will always be prejudiced against her, for her gender, for her intellect, for her profession and for her Judaism. She tries to keep her faith hidden, as much as she can, while not betraying it. Her fears are real, and particularly real for me, in ways that may not resonate with other readers, but do for this one, especially now.

Another thing that made this book so interesting for me is that it is Sophia’s journey. She’s the real warrior in this story, and not the dragon-shifter (and very male) Cathal. She’s the only person with the knowledge and skill to take the fight to the wizard, and the only one who has a chance to prevail. Cathal (and his family) provide much needed support, but Sophia is the skilled warrior on this battlefield, and there is not one moment of doubt that she is the right person to fight this foe.

Cathal wants to protect her, but it always feels like it is in the sense that we all want to protect those we love, and not in the strong man protecting weaker woman sense. He doesn’t see her as weak except in the strictly physical sense, but then, this battle will not be fought by strictly physical, or even mostly physical, means. And while his attitude feels out of his time, it is not outside the way his family functions. Female dragons are every bit as powerful, if not a bit more so, than the males. 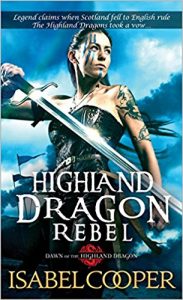 And I liked that the difficulties between them were not swept under the carpet in a wave of romantic fluff. Or even obscured by a cloud of lust. There are real issues, and those have to be dealt with in order to arrive at a happy ever after. They successfully compromise, but not in a way where she gives up everything for him. They meet in a negotiated middle, and it works.

I’m looking forward to the next story in this series, Highland Dragon Rebel, to see where those dragons fly next.

Sourcebooks is giving away 3 copies of Highland Dragon Warrior to lucky entrants on this tour. 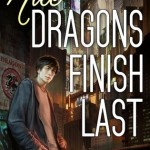 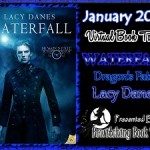