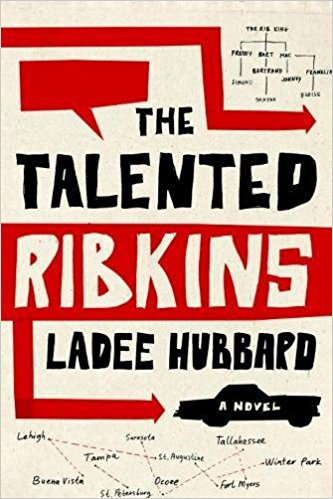 At seventy-two, Johnny Ribkins shouldn’t have such problems: He’s got one week to come up with the money he stole from his mobster boss or it’s curtains.

What may or may not be useful to Johnny as he flees is that he comes from an African-American family that has been gifted with super powers that are a bit, well, odd. Okay, very odd. For example, Johnny's father could see colors no one else could see. His brother could scale perfectly flat walls. His cousin belches fire. And Johnny himself can make precise maps of any space you name, whether he's been there or not.

In the old days, the Ribkins family tried to apply their gifts to the civil rights effort, calling themselves The Justice Committee. But when their, eh, superpowers proved insufficient, the group fell apart. Out of frustration Johnny and his brother used their talents to stage a series of burglaries, each more daring than the last.

Fast forward a couple decades and Johnny’s on a race against the clock to dig up loot he's stashed all over Florida. His brother is gone, but he has an unexpected sidekick: his brother's daughter, Eloise, who has a special superpower of her own.

Inspired by W. E. B. Du Bois’s famous essay “The Talented Tenth” and fuelled by Ladee Hubbard’s marvelously original imagination, The Talented Ribkins is a big-hearted debut novel about race, class, politics, and the unique gifts that, while they may cause some problems from time to time, bind a family together.

A big-hearted novel about a family with special gifts who sometimes stumble in their efforts to succeed in life, The Talented Ribkins draws on such novels as Toni Morrison’s Sula The Intuitionist to weave themes of race, class, and politics into a wonderfully accomplished and engaging novel.

The blurb for the book talks about the “superpowers” that all the members of the Ribkins family have been gifted (or cursed) with. And those powers do come into play. But that’s not what the book is “about”, not really.

Instead, The Talented Ribkins is part of the great American road novel tradition. Johnny Ribkins, 72 and some days feeling every bit of it, is on what is probably one last road trip. His ostensible purpose is to dig up all the money he buried all over Florida, in order to pay his self-inflicted debt to someone who Johnny took a few too many years to discover was a really, really bad man.

But while he’s digging up all those little bags of money, he’s really digging up his own past. He starts by visiting his late brother’s old home, only to discover something he never expected. His brother left a child behind, and Eloise, now 13, has her own version of the Ribkins family talent.

Johnny makes maps. Maps to anywhere, from anywhere, whether he’s been there or not. Maps that route around any security, any obstacle, any difficulty whatsoever. His brother Franklin, Eloise’ dad, could climb walls. Any walls. Like Spiderman, but he didn’t need web shooters. His hands were sticky enough all on their own.

Johnny and Franklin made a good living, if not exactly a law-abiding one, as thieves. Until they stole something too hot to handle, and had a falling out. Franklin fell into booze and drugs and it was all over. But now there’s Eloise and her talent for catching anything that anyone throws at her. Or so it seems.

Johnny has a week to dig up all his buried treasure. Eloise needs to learn about her family, and how to handle her rather unusual talent in some way other than letting people throw cans and rocks at her to see her catch them.

But while what we see appears to be a broken down old man on a desperate race to save himself, one last time – nothing is quite as it seems. Not to Eloise, not to Johnny, and definitely not to the reader.

And it’s that twist at the end that makes the story as magical as the Ribkins family talents.

Escape Rating B: I was expecting the story to be more about those Ribkins family talents, those just slightly more than ordinary superpowers. But it really isn’t. The story is really about Johnny digging up his past, both the good and the bad, and letting himself remember who he was and what he tried to do.

Once upon a time, Johnny Ribkins wasn’t the only black man with a little something extra. During the Civil Rights era, Johnny and several like-minded and like-talented friends got together and formed their own version of the Justice League. They called themselves the Justice Committee, and they turned themselves into mostly unsung heroes of the Civil Rights Movement. Not because they did anything flashy, but because Johnny mapped them into the right place at the right time to allow the flashy things to happen. If a speech was important, the Justice Committee conveniently staged a distraction that took the KKK or the cops in their pockets into another direction. Their interventions, mostly non-violent, if occasionally slightly explosive, allowed the Movement’s movers and shakers to get out of the way of lynch mobs and false arrests so they could continue their work.

As Johnny travels with Eloise, he revisits all his former comrades He visits his family, both the one he was born to and the one he made. He’s looking for money he secretly buried with each of them. But his meandering road allows him to explore his own past, and see where it seems his present has changed course.

Until we discover that his present has arrived where it was meant to be all along, just from a slightly different route – not dissimilar to the way that Johnny handles that debt that set him on his long and winding road in the first place.

The story, like Johnny’s route, wanders a bit. The past and present blend together more than a bit, as they do in Johnny’s memories each time he digs up a bag of money, and his own past with it.

There are lots of times when Eloise wonders where they are going, why they seem to be driving in circles around Florida, and what the point of it all is. And sometimes so does the reader.

But in the end it all comes together, and the surprise, like the truth about Eloise’s talent, turns out to be just a bit magical.

I’m giving away a copy of The Talented Ribkins to one lucky US or Canadian commenter.

13 thoughts on “Review: The Talented Ribkins by Ladee Hubbard + Giveaway”