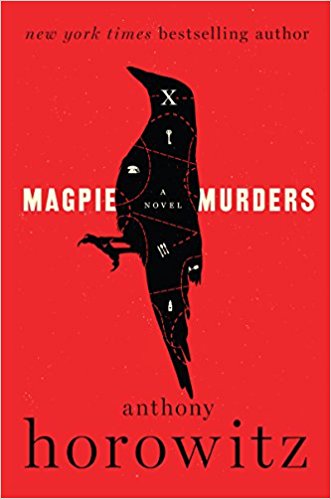 When editor Susan Ryeland is given the manuscript of Alan Conway’s latest novel, she has no reason to think it will be much different from any of his others. After working with the bestselling crime writer for years, she’s intimately familiar with his detective, Atticus Pünd, who solves mysteries disturbing sleepy English villages. An homage to queens of classic British crime such as Agatha Christie and Dorothy Sayers, Alan’s traditional formula has proved hugely successful. So successful that Susan must continue to put up with his troubling behavior if she wants to keep her job.

Conway’s latest tale has Atticus Pünd investigating a murder at Pye Hall, a local manor house. Yes, there are dead bodies and a host of intriguing suspects, but the more Susan reads, the more she’s convinced that there is another story hidden in the pages of the manuscript: one of real-life jealousy, greed, ruthless ambition, and murder.

I really wish that the Atticus Pünd series existed, because the one we got in Magpie Murders was absolutely marvelous. I’d dearly love to read the rest of the series.

What we have, however, is the final book in the series, encased within a framing story about the death of the fictitious author of this fictitious book, and the many, many ways in which art seems to be imitating life – or vice versa.

The story begins with its frame. Susan Ryeland, editor at a small but prestigious publishing house, settles in for the weekend to read the latest manuscript by her least favorite and most favorite author. Susan loves Alan Conway’s work, but the man himself is far from lovable.

As Susan settles in to read, we do too. We read Magpie Murders by Alan Conway right along with her. And it is a marvelous take on the Golden Age of mystery, reading as though it should sit on the shelf beside Agatha Christie, Dorothy Sayers and Margery Allingham.

The detective, the perpetual outsider, comes to a small English village to investigate what turn out to be a series of murders. It’s an absorbing case, and the readers, along with Susan herself, are sucked right into the mid-1950s, the mind of the detective and the murderous goings on of this otherwise unremarkable little place.

Until the story ends abruptly, and we, as well as Susan, are left wondering “who done it?”. The last chapter of Magpie Murders is missing. And its author has just been found dead, an apparent suicide.

So Susan begins by hunting for that missing chapter, and finds herself hunting for the truth about Alan Conway’s life, and about his death. By the time those missing pages are found, Susan has uncovered much more than she, or anyone else, could have bargained for.

After all the times when she has blurbed that “reading such-and-such’s latest book changed her life”, just this once, it’s all too true.

I absolutely adored Magpie Murders by Alan Conway. It was both a wonderful homage to the mysteries of the Golden Age, and a terrific case itself. Atticus Pünd would make a wonderful addition to the ranks of series detectives, right up there with Poirot, Marple, Wimsey and the rest. In its post-WWII time period, it takes the reader back to a simpler but no less deadly time, and its play on the locked room/locked house mystery keeps the reader guessing.

It gave me a tremendous yen to pick up a “real” historical mystery at the first opportunity. It reminded me how much I love the genre, and gave me a hankering to return. Or just to re-watch Poirot.

The abrupt ending to Conway’s novel jarred me almost as much as it did Susan Ryeland. I felt cheated. I wanted to know who the killer was every bit as much as she did. But I had a difficult time getting into the framing story.

In fact, I started the book once, couldn’t get into it, and then picked it up on audio. Listening to it got me over the hump, to the point where I was so captivated by Pünd’s story that I changed the audio back for the book, so that I could find out whodunnit that much more quickly – only to be disappointed when Susan discovers that the final chapter is missing.

Susan’s own quest turned out to be fascinating as well, but for some reason I didn’t find her as sympathetic or interesting a character to follow as the even more fictional Pünd.

The problem is that Pünd, while a bit distant in the traditional detectival mold, is a sympathetic character and seems to be a generally nice man. We want him to succeed. Alan Conway, on the other hand, will not be missed by anyone, except possibly his publishers.

Conway’s series is the marquee title for small but prestigious Cloverleaf Books. It’s their one big moneymaker, and it tides them over an awful lot of less successful ventures. Conway, or rather Atticus Pünd, pays the bills and keeps the lights on. But no one likes Conway. There are certainly people who benefit from his death in the direct, traditional way, but there are even more who are just happy at his absence from this earth, beginning with his ex-wife and ending with Susan’s lover. While there are plenty of people who will miss Atticus Pünd, no one will miss his author.

Susan finds herself with plenty of motives, too many suspects, and a police investigation that is all too happy to consider it suicide and close the case. There’s plenty of evidence to support that theory, and damn little to support anything else.

Until Susan starts digging, and nearly digs her own grave. In the end, no one is certain that good triumphed and evil got its just desserts. Not even Susan. And that’s what makes the contemporary thriller less satisfying than the historical mystery it contains. Mystery, as a great writer once said, is the romance of justice. Good is supposed to triumph, evil is supposed to get those just desserts. When that formula is subverted, as it is in the contemporary frame for Magpie Murders, it feels wrong, at least for this reader. While there may be a metaphor in there about the world being more complicated than it used to be, or that the real world isn’t half so neat and tidy as fiction, the framing story is also fiction. I want my neat and tidy ending, and I’m disappointed that it wasn’t there.

But we do finally get to read Atticus Pünd’s last chapter. And that was well worth waiting for.

One thought on “Review: Magpie Murders by Anthony Horowitz”