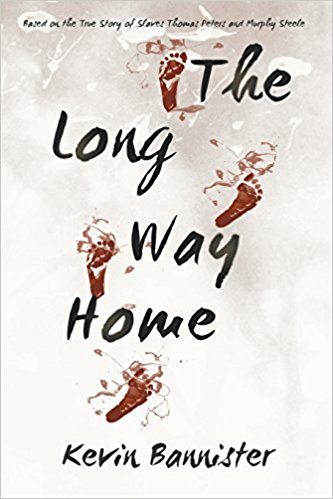 Set in the turbulent times of the War of Independence, 'The Long Way Home' follows the lives of Thomas Peters and Murphy Steele who are friends, former slaves, fellows-in-arms and leaders of the Black Brigade. Their real-life story is an epic adventure tale as they battle bounty hunters, racism, poverty and epidemic in their adopted country after the war.

'The Long Way Home' has resonated with readers around the world as an unforgettable account of courage, hope and determination triumphing over despair and injustice. Thomas Peters, thoughtful and charismatic, and Murphy Steele, strong and impulsive, lead their followers on an inspirational search for a place where they can be free.

History is generally written by the victors. In the case of the American Revolution, that means that the successfully rebelling colonials wrote all the history books, and the British officials and those who were loyal to them end up as footnotes in a history that conveniently ignores their courage and bravery.

Just because they were on the wrong side of history does not mean that they did not exhibit those qualities. Even if that fact is not convenient for the narrative as written by those victorious rebels.

The story in The Long Way Home is one of those inconvenient narratives. Thomas Peters and Murphy Steele were inconvenient heroes of the American Revolution, because they fought on what turned out to be the “wrong” side, for select definitions of both wrong and even side.

The British, just as the Union did in a much later and even bloodier war, offered freedom to any slave able to reach British property and willing to fight for their cause. Thomas and Murphy, both escaped slaves, managed to reach a British warship and take the “King’s shilling” and enlist – even though relatively few actual shillings ever changed hands. After multiple harrowing escape attempts, they had finally succeeded, enlisting in the British Army to fight for the freedom that was promised them.

They became members of the Black Brigade, a small fighting unit of escaped slaves turned soldiers, and participated as combatants in some of the bloodiest battles of the war. And even though the Loyalist cause was eventually lost, their search for freedom never ended – even as the retreating British Army shunted them from New York to Bermuda to Nova Scotia, always promising enough tools for them to make their own future, but never quite delivering.

Until, at last, they took their freedom into their own hands once again.

Escape Rating B: Although The Long Way Home is historical fiction rather than true history, it feels very close to the truth of the events that it relates. Peters and Steele were heroes, just on the wrong side of history. But then, the right side of colonial independence would have left them in chains. For them, the British offered their only option, and they seized it with both hands – wrapped around the stock of a bayonet.

The story is told from Murphy Steele’s perspective, and that’s where a lot of its fictional element comes from. History records what he did, but not what he felt. That’s where the author’s interpretation comes in.

But the history that he saw, that he made, is one that deserves to be remembered – and has been lost. The Black Brigade really did exist, really fought, really left the U.S. for Canada, and then, kept going. That it does not even have a Wikipedia entry of its own does not mean that these men and what they did are not important, because they were, and they still are.

The author uses rather spare prose to convey the thoughts, feelings and actions of Murphy Steele, the life he lived and both the hardships and the joys he experienced. It’s a style that works for the character, as of the two men, Thomas Peters was the one who spoke, and inspired, and Murphy was the one who acted first and seldom regretted those actions. They were a powerful team.

For reasons that had nothing to do with the book itself, this wasn’t what I was in the mood for. But once I got into the story, and once that story past its first harrowing steps through their first escapes, punishments and brief periods of attempting to settle for a life that no one should ever have been asked to settle for, the story pulls the reader along through war, flight, despair and ultimately a kind of triumph.

This is history that should be much better known than it is. The Long Way Home is an excellent start to making that happen.

I’m giving away a copy of The Long Way Home to one lucky US/Canadian commenter.