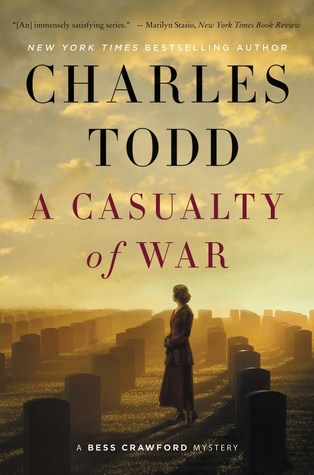 From New York Times bestselling author Charles Todd comes a haunting tale that explores the impact of World War I on all who witnessed it—officers, soldiers, doctors, and battlefield nurses like Bess Crawford.

Though the Great War is nearing its end, the fighting rages on. While waiting for transport back to her post, Bess Crawford meets Captain Alan Travis from the island of Barbados. Later, when he’s brought into her forward aid station disoriented from a head wound, Bess is alarmed that he believes his distant English cousin, Lieutenant James Travis, shot him. Then the Captain is brought back to the aid station with a more severe wound, once more angrily denouncing the Lieutenant as a killer. But when it appears that James Travis couldn’t have shot him, the Captain’s sanity is questioned. Still, Bess wonders how such an experienced officer could be so wrong.

On leave in England, Bess finds the Captain strapped to his bed in a clinic for brain injuries. Horrified by his condition, Bess and Sergeant Major Simon Brandon travel to James Travis’s home in Suffolk, to learn more about the baffling relationship between these two cousins.

Her search will lead this smart, capable, and compassionate young woman into unexpected danger, and bring her face to face with the visible and invisible wounds of war that not even the much-longed for peace can heal.

They say that the road to hell is paved with good intentions. And that’s how it seems for much of A Casualty of War, as every time that Bess Crawford attempts to make things better for Captain Alan Travis, she seems to end up digging the poor man an even bigger hole. Bess being Bess, she feels more than a bit guilty about it, and a whole lot responsible.

And it’s that sense of responsibility that gets her in deep trouble. As it usually does.

Bess’ war is ending. Not with a bang, but seemingly with a whimper, as the eleventh hour of the eleventh day of the eleventh month of 1918 is noted by the chiming of a surgeon’s watch and nothing more at the forward aid station where Bess is currently stationed.

The guns may have finally been silenced, but there are still plenty of casualties pouring into the aid station, including Captain Travis. Bess met Travis once before, as the both spent a brief respite at a canteen in between trips back to the front. She found him pleasant, affable, intelligent and eager to return home to his family estate in Barbados.

Now he’s a patient, claiming that he was shot by someone on their own side. Not merely someone unknown, but his cousin James. His late cousin James. Very late. A year late. Whether James went up or down after his death in combat, he hasn’t been shooting anyone recently. On either side. For more than a year.

And that’s where the story kicks into gear and moves back to England. All the nurses who served in forward positions get sent home for two weeks’ leave, including Bess. She still has a duty to perform, but where that duty can best be provided is something that she’ll learn after a couple of weeks to rest and regroup. Or at least that’s what supposed to happen.

Instead, Bess takes on Captain Travis’ continuing case. Not his medical case, not exactly. Rather, the mess that she feels she helped to land him in. Bess feels as if she was the one to suggest that his supposed assailant, the one who Travis said resembled his great-uncle, might be his cousin James. So when it turns out that James has been dead for over a year, Alan Travis gets classified as a head-case and sent to increasingly worse care.

Shell shock was considered a moral failing, not a disease.

But Bess remembers the man she met in that canteen before he was wounded. She thinks he’s telling a version of the truth. And that he’s definitely not crazy. Just because it couldn’t have been James does not mean that there was not a very real assailant, one who resembled his cousin, in a British uniform, shooting at him. Not once but twice. As Bess treated both his injuries, she knows for certain that the shots were real. The only question is who fired them.

It will be up to Bess, with the help of her friend (and her father’s right-hand man) Sergeant Major Simon Brandon, to figure out who did what to whom before it’s too late. Not just for Captain Travis, but also for Bess herself.

Escape Rating B+: After the Magpie Murders a couple of weeks ago, I have been itching to sink my teeth into a good historical mystery. I pulled A Casualty of War out of the TBR stack a couple of weeks ahead of publication just to scratch that itch. And I’m glad I did. 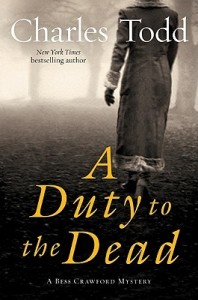 I have loved this series from its very beginning in A Duty to the Dead. And if you like historical mystery or are a fan of Maisie Dobbs in particular, that’s where I recommend that new readers begin Bess Crawford’s journey. While Bess finds herself in the middle of a case during every book, the series is also the story of Bess’ war as a combat nurse. Her journey begins in A Duty to the Dead, while in A Casualty of War it is obvious that her war is coming to an end. Which makes this book not the best place to start.

The war itself is winding down in this book. It actually has wound down, but that’s something we know from history and not something that Bess was 100% certain of at the time. What happened on November 11, 1918 was an armistice, which is not a peace treaty. While the guns were silent, it was still possible that they would roar again. Which of course they did, but not for another 20 years.

So part of the underlying theme to A Casualty of War is that Bess’ war, and her war service, are coming to an end. Bess, like many combat veterans, suffers from PTSD, even if it wasn’t called that then. Her experiences, many of them horrific, will be with her for the rest of her life. And unlike women of previous generations, Bess is used to serving, not just to being useful, but to having a profession and the professional respect and recognition to go with it. Adjusting to peacetime is going to be difficult.

It’s not surprising that Bess involves herself in a mystery during her leave. She doesn’t know what to do with herself if she’s not taking care of someone else.

One of the things that made this particular case frustrating, at least for this reader, is that it was obvious fairly early on that whatever was going on in the village of Sinclair and whatever was going on with Captain Travis were connected, and that the issue revolved around his cousin James Travis’ estate. While whodunnit was not remotely clear, if only because we hadn’t met the perpetrator at that point, the why of things felt obvious.

But one of the fascinating things about the case was the way that Simon Brandon and Bess worked together. Their relationship has always been interesting. Simon is a few years older than Bess, probably ten but not more than fifteen. He’s been a part of her life from her very earliest memories as he joined her father’s regiment in India when she was a child, and when he had to lie about his age to enlist. While he seems to act as an older brother, he certainly isn’t. He is certainly her protector, but his protection never encroaches on Bess’ agency or autonomy, not even when he fairly obviously wishes that he could. Nearly every man who asks Bess to marry him, and there have been several, wonders if Brandon is the reason that she refuses. And so does this reader. He is the one person in Bess’ life who understands and accepts her as she is, and not as he expects a woman to be in that time and place. 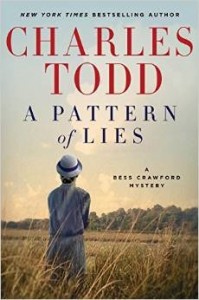 So the mystery in A Casualty of War had its anticlimactic moments, and also resembled bits of A Pattern of Lies. But the questions that it asks about not just Bess’ future, but the future of all who served in that war that did not end all wars and must now lay down their guns and their scalpels, remains an open one. 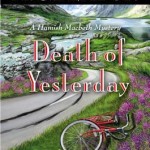