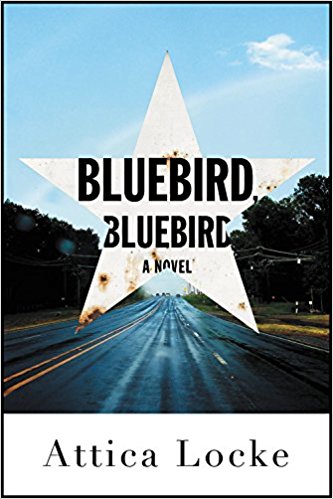 A powerful thriller about the explosive intersection of love, race, and justice from a writer and producer of the Emmy winning Fox TV show Empire.

When it comes to law and order, East Texas plays by its own rules--a fact that Darren Mathews, a black Texas Ranger, knows all too well. Deeply ambivalent about growing up black in the lone star state, he was the first in his family to get as far away from Texas as he could. Until duty called him home.

When his allegiance to his roots puts his job in jeopardy, he travels up Highway 59 to the small town of Lark, where two murders--a black lawyer from Chicago and a local white woman--have stirred up a hornet's nest of resentment. Darren must solve the crimes--and save himself in the process--before Lark's long-simmering racial fault lines erupt.

A rural noir suffused with the unique music, color, and nuance of East Texas, Bluebird, Bluebird is an exhilarating, timely novel about the collision of race and justice in America.

It has been said that the mystery genre is the “romance of justice”. Bluebird, Bluebird is the story of one man who has devoted his career to defending that justice, even though he is all too aware that it seldom applies to him. Not just because he’s a cop, but because he’s a black cop, a Texas Ranger, in rural East Texas.

And pursuing justice, for a black man murdered in a small town, and for himself, is a fast way to run afoul of his bosses at the Rangers, of the local white police who have already decided how things are going to be, and of the Aryan Brotherhood of Texas who have multiple reasons for wanting to gun him down.

That alone is plenty of reason for Darren Mathews to want to take them down, instead. And with more justice.

Although Bluebird, Bluebird is written as a mystery, it’s really all about race relations, a subject that the Texas Rangers as an organization refuse to acknowledge or even talk about.

While at first it seems as if the mystery is all wrapped up in the very sorry state of relations between the black and white populations of tiny Lark, Texas, in the end it turns out to be much more about relations in general, as despite all of the political and social restrictions that attempted to separate the races, the fact is that the entire town, black and white, are all related, and have been for generations.

Mathews finds himself walking a tightrope. Being a good cop requires following the trail of evidence wherever it might lead. Being allowed to remain a cop, good, bad or otherwise, requires that he accept the locals’ willingness to sweep the murder of a black man under the rug in order to prosecute a man who is certainly guilty of the murder of a white woman.

He discovers that he can’t let it rest, even if it means that he loses both his badge and his family. Only to realize, at the end, that the problem at the heart of the mystery has followed him home.

Escape Rating A: This one is a thriller. And a thrill, from beginning to end.

Mathews is a man caught in the middle. Multiple middles, and they all contradict each other. Being a black cop, a black Texas Ranger, is to be a walking contradiction in too much of East Texas. He can’t be an authority figure because he’s a black man, and yet, as a Ranger he outranks all the local law enforcement – including the ones who have to fight the impulse to shoot a black man with a gun on sight.

He has to walk a fine line between the way that things are done and the things that need to be done. The difficulty of straddling this particular line is easily seen through the reactions of the widow of the victim, a black woman from Chicago with an international reputation as a fashion photographer who expects to be paid deference, and who instead has to watch Mathews do his best, which often isn’t very good, to provide just enough deference to keep from getting shut out, or just shot, while still hanging onto at least a scrap of his pride.

The crimes are as puzzling as any mystery. What seems contradictory to the reader, while at the same time feeling completely true to life, is the way that the white authorities have decided the outcome before the investigation even begins – in fact without conducting an investigation at all. As far as they are concerned, it must have happened a certain way because that’s the way that things always happen – even if they didn’t.

The reader wants to rail at the pages, to force someone to see things as they are, instead of as they want them to be – and of course that’s not possible. But it does make the reader empathize with Ranger Mathews as he tries to find a way to make things right – when that is not the outcome that anyone around him gives a damn about.

Mathews is a fascinating and flawed character, who realizes at the end that the person he has deceived the most in this entire investigation is himself. The story ends with a chill that forces the reader, as well as the protagonist, to re-evaluate everything they thought they learned. The hallmark of a terrific story.