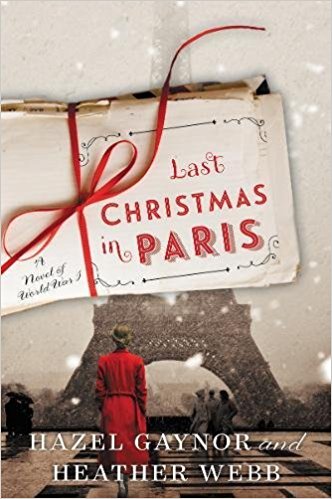 August 1914. England is at war. As Evie Elliott watches her brother, Will, and his best friend, Thomas Harding, depart for the front, she believes—as everyone does—that it will be over by Christmas, when the trio plan to celebrate the holiday among the romantic cafes of Paris.

But as history tells us, it all happened so differently…

Evie and Thomas experience a very different war. Frustrated by life as a privileged young lady, Evie longs to play a greater part in the conflict—but how?—and as Thomas struggles with the unimaginable realities of war he also faces personal battles back home where War Office regulations on press reporting cause trouble at his father’s newspaper business. Through their letters, Evie and Thomas share their greatest hopes and fears—and grow ever fonder from afar. Can love flourish amid the horror of the First World War, or will fate intervene?

Christmas 1968. With failing health, Thomas returns to Paris—a cherished packet of letters in hand—determined to lay to rest the ghosts of his past. But one final letter is waiting for him…

At the beginning, in those glorious and naive first months of World War I, Tom and Will volunteer to go off to war. Everyone thinks it will be over by Christmas. Christmas of 1914, not Christmas of 1918 as it nearly turned out to be.

Evie, Will’s younger sister, is stuck at home in the gilded cage that was wrapped around all young women of the upper classes prior to the war. She wants to volunteer, to do something for the war effort, and she is old enough to do so. But her parents won’t LET her, and at the beginning, that means everything.

So she stays home, badly knits gloves and socks, and begins her correspondence with her brother and with Tom, who has been a friend to them since childhood.

Will is an indifferent correspondent at best, but Tom certainly is not. Evie has plans of becoming a writer, and Tom had begun studying English literature at Oxford, with plans of becoming an Oxford don. His father wants him to buckle down and take over the family newspaper, the London Daily News.

But all hopes and dreams and plans are set cock-eyed by the war as it drags on, and on, and on. And eventually drags Will Elliott into its maw, spitting out his bullet-riddled corpse.

Tom and Evie go on. Their letters become each other’s lights in very dark places, as they pour out their minds, hearts and souls to each other over the months and the miles. They tell each other everything, except that somewhere amid the ink and the paper, they have fallen in love with each other – if not long before.

Escape Rating A: Last Christmas in Paris is a beautiful story from beginning to end. It is also ultimately a sad story, but appropriately so.

Epistolary novels such as this one are difficult to write. There is no omniscient third person who sees all and has the ability to tell all. Even if they don’t always do so. In a novel that consists nearly entirely of letters, we see events as they happen, but only what the writer chooses to tell the intended recipient. If they don’t put their thoughts on paper, we don’t know what they are – unless they put them on paper to someone else.

So we know how Evie feels, not because she tells Tom, but because she tells her best friend Alice. And we can only guess about Tom’s feelings, because he is so very careful not to tell Evie what is in his heart. But what he does tell her is heartbreaking, because Tom tells Evie as much as the censors will allow about the true state of his war. And it’s hell.

So much hell that he is eventually hospitalized for what was termed “shell shock”. Amazingly, he recovers, as much as anyone could, and returns to the front. We now know “shell shock” as PTSD, but that in his time it was considered a “weakness of moral fiber” is enough to make the reader weep.

We also see what many considered the breakdown of the social order from Evie’s perspective. At the beginning, her life is completely restricted by her parents. But as the war goes on, Evie escapes from those restrictions, first by volunteering as a postal worker, then by writing a controversial newspaper column on women’s perspectives of the war, and finally by volunteering for the Women’s Army Auxiliary Corps and going to France herself to serve as a telephone operator and secret war correspondent.

Between Tom at the Front and Evie on the Home Front, we see the horrors of war in all their destruction. And it’s brutal in one way or another no matter where they are.

But as I said in the beginning, this story is bittersweet. Not from the contents of the correspondence itself, but from the perspective of when the letters are being re-read. Bracketing each year of correspondence, we have a framing story. It is 1968, 50 years after the end of the war. Tom Harding has set himself the final task of re-reading the correspondence, and returning to Paris for Christmas, one last time. He is dying of cancer, and Evie is already gone.

We find out what happened to Evie as the letters progress. The reader experiences some of those letters with a certain amount of bated breath, as it is more than possible that they didn’t manage to have their happy ever after before it ended. There are so many points along the way where things nearly go smash, and we don’t discover until nearly the end what really happened.

The story is beautiful and quite absorbing. It’s a great book to read if you don’t think you have lots of time at a time, as one can read just a few letters and feel like one has absorbed so much. But I would sit down to read just a few letters and find myself coming up for air at the end of an entire year’s worth of correspondence. I could never resist reading “just one more”. 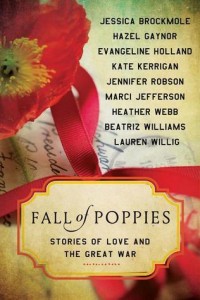 As much as I loved this book, I kept having the niggling feeling that I had read some of it before. It certainly reminds me Fall of Poppies, last year’s wonderful collection of World War I romances, two of which were written by the co-authors of Last Christmas in Paris. It also reminds me of bits of Jennifer Robson’s lovely World War I stories, as well as a bit of the side plot of one of the later Maisie Dobbs books.

If you love World War I stories, miss Downton Abbey, or just want to read something to commemorate the upcoming 99th anniversary of the end of the war, celebrated as Remembrance Day in the United Kingdom and the Commonwealth, and as Veterans Day in the United States, Last Christmas in Paris is a gem of a book.

4 thoughts on “Review: Last Christmas in Paris by Hazel Gaynor and Heather Webb”