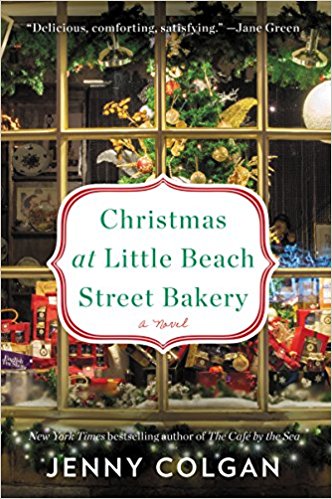 New York Times-bestselling author Jenny Colgan dishes up another delightful holiday story about the residents in an idyllic Cornish village who must join forces to save Christmas.

In the Cornish coastal village of Mount Polbearne, the Christmas season has arrived. It’s a joyous time for family, friends, and feasting as decorations sparkle along the town’s winding streets and shop windows feature buoyant, festive displays. And in Polly’s Little Beach Street bakery, the aromas of gingerbread cookies and other treats tempt people in from the cold.

Though Polly is busy keeping up with the demands of the season, she still makes time for her beekeeper boyfriend, Huckle. She’s especially happy to be celebrating the holiday this year with him, and can’t wait to cuddle up in front of the fireplace with a cup of eggnog on Christmas Eve.

But holiday bliss soon gives way to panic when a storm cuts the village off from the mainland. Now it will take all of the villagers to work together in order to ensure everyone has a Merry Christmas.

I got so wrapped up in this one that I shivered right along with the heroine. It’s COLD on the coast of Cornwall at Christmas!

This is a story about friendship and families and relationships and finding your bliss and not letting the baggage of the past drag you down.

It’s also about a miracle at Christmas. Not that one. But the tiny little miracle that saves both a family and a friendship, even if it’s not exactly deserved. But miracles so seldom are.

Polly and Kerenza are best friends, and have been since they bonded like glue as scholarship students at a posh private school. But their friendship is severely tested when Kerenza confesses to Polly that the baby in her eight months’ pregnant belly might not be her husband’s.

Polly is caught on the horns of multiple dilemmas, So she does what she usually does – she buries herself in her work as the owner of the Little Beach Street Bakery, and tries to push it all away.

Part of the problem is that Kerenza’s husband Reuben and Polly’s fiance Huckle are also best friends. Kerenza fears that if Polly tells Huckle her big secret, then Huckle will feel duty-bound to reveal all to Reuben, ending their marriage in a gigantic mess.

Polly and Kerenza were scholarship students way back when because they were both raised by single mothers who did not do well financially – or in Polly’s case, emotionally. Kerenza’s dad is dead, but Polly’s sperm donor is just a missing piece in her life. A missing piece she can’t fill in, because he’s a subject her mother refuses to talk about. And neither Kerenza nor Polly is willing to risk putting Kerenza’s baby into the same life that they both only managed to get through because they had each other. Not if there’s any way on Earth to avoid it – at any cost.

But Polly fears, and rightly so, that keeping a huge secret from Huckle will damage their seemingly perfect relationship. A relationship that is only perfect because they both avoid the subjects that neither of them wants to deal with. Most particularly Polly’s complete unwillingness to talk about their future. They love each other, they believe they are each other’s soul mates – but whenever Huck raises the subject of taking their engagement to its next logical step, Polly freezes, and freezes him out.

It’s more than cold enough in Mount Polbearne without that.

But Polly is the one who is really stuck. When her sperm donor’s wife contacts her to tell her that her biological father is dying and wants to see her, it’s up to Polly to decide what she needs to do. Not just whether to see him or not, but whether to finally pry open her mother’s memory box of “things we do not discuss”. And then to decide how the revelations of the secrets of her own life will affect her and her future.

So it’s Kerenza’s crisis, but it’s Polly’s journey. With her pet puffin Neil riding along with her, every step of the way. And it’s lovely. (Especially Neil!)

Escape Rating B+: The first quarter of the book I remember thinking that it was interesting and cute but not all that compelling. The mess of Kerenza’s life, and the complete narcissistic selfishness of her husband Reuben did not thrill me as a reader. It did rather seem as if her mess was very much self-inflicted.

But I settled in to read after dinner, and just got hooked. I came up for air after an hour and realized not just how much time had passed, but also just how much story I had absorbed. Once the focus shifted fully into Polly essentially in not-dealing-with-multiple-crises mode, I got sucked in and couldn’t tear myself away until the last page.

One of the interesting themes that plays out over the course of the story is about the damage that secrets can do to a relationship. Kerenza spends much of the story punishing herself for her unremembered indiscretion, holding the secret so tightly (and so necessarily) that she becomes a shadow of herself. And yet, she knows that it is vital for her baby’s future that she keep the secret no matter what.

But requiring Polly to also keep the secret damages her relationship with Huckle, almost irrevocably, even though it is not her secret and, as she tries to convince Huckle, not her secret to tell, either. And that it’s really none of their business. Or at least not enough of their business to risk the consequences to Kerenza and to the baby.

The more damaging secrets are the secrets that Polly’s mother Doreen has kept from her about her biological father and their relationship. Because it seems obvious that whatever happened back then, it has kept Doreen from living her own life and helping Polly to both grow her own wings and fly free. That Polly managed anyway, at least to some extent, is a testament to her own strength. But those buried secrets still hold her back and weigh her down, and she needs to know the truth in order to live her dreams. She can’t let her life be ruled by her fears – especially by proxy. Watching her set herself free is one of the highlights of the story.

That Polly has been adopted by a puffin, or more specifically that Neil has Polly wrapped around his bright little beak, is utterly adorable. And adds a marvelous touch of whimsy at just the right moments. I haven’t read the rest of the Little Beach Street Bakery series, and now I want to, if only to find out how Neil and Polly adopted each other. It must be adorable.