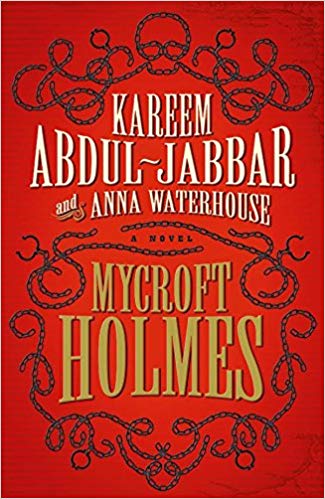 Fresh out of Cambridge University, the young Mycroft Holmes is already making a name​ ​for himself in government, working for the Secretary of State for War. Yet this most British of civil servants has strong ties to the faraway island of Trinidad, the birthplace of his best friend, Cyrus Douglas, a man of African descent, and where his fiancée Georgiana Sutton was raised.

Mycroft’s comfortable existence is overturned when Douglas receives troubling reports​ from home. There are rumors of mysterious disappearances, strange footprints in the sand, and spirits enticing children to their deaths, their bodies found drained of blood. Upon hearing the news, Georgiana abruptly departs for Trinidad. Near panic, Mycroft convinces Douglas that they should follow her, drawing the two men into a web of dark secrets that grows more treacherous with each step they take...

Written by NBA superstar Kareem Abdul- Jabbar and screenwriter Anna Waterhouse, Mycroft Holmes reveals the untold story of Sherlock’s older brother. This harrowing adventure changed his life, and set the​ stage for the man Mycroft would become: founder of the famous Diogenes Club and the hidden power behind the British government.

Because of the house closing tomorrow, I’m having a difficult time concentrating on all the books I’m supposed to be reading. Instead, I’m looking for books to sweep me away, mostly to places and people I’ve met before. Or at least am well acquainted with through the pages of my favorite books.

And that led me to this one. As I’ve said many times before, I love Sherlock Holmes pastiches, particularly when they are done well and/or introduce me to new facets of characters that I think I know and certainly love.

This book about Mycroft Holmes in his “salad days” does a bit of both. For those of us who are fond of the Holmes Brothers, this story about Mycroft’s early days as a government official, when he was young, in love, and his weight was definitely proportional to his height, is a treat. And not just for its glimpses at an even younger Sherlock Holmes, still at school and a very indifferent student, trying to hone his gift for memory and observation into something that will keep him away from boredom, and see him intellectually if not always gainfully employed.

Even though this is a story about Mycroft rather than Sherlock Holmes, someone still needs to serve as “Watson’, chronicler, sounding-board, foil and occasionally backup gunman. In this story that role falls to Cyrus Douglas, a black man in his early 40s who is still a powerful street fighter as well as the secret owner of a successful tobacco shop in London.

The story begins when Douglas receives word from his home in Trinidad that someone or something is killing young children in a manner that strongly suggests supernatural origin. The children are dead, the adults are both grief-stricken and scared, and Douglas is tempted to sail home and look into the matter.

So is Georgiana Sutton, Mycroft Holmes’ fiancee, also a native of Trinidad – although from much different social and economic circles than Douglas.

Young Mycroft, deeply in love (and there’s a phrase I never thought I’d be writing) decides to follow Georgiana to Trinidad, using his government position as cover and providing Douglas with cover for his own desire to head home.

Mycroft and Douglas, true friends masquerading as master and manservant, run into trouble from the moment they arrive on shipboard, and stay in various states of trouble from embarkation to disembarkation.

Only to arrive in Trinidad, battered, bruised and uncertain of what happened to Georgiana or just which of the two of them exactly what forces are after with such bone-breaking intent.

This journey that leads Mycroft Holmes into the heart of darkness, breaks the young man that he was. And takes him on his first steps into becoming the spider at the heart of the British government’s wide, wide web.

Escape Rating A-: As a portrait of the government functionary as a very young man, Mycroft Holmes is a treat. When the story begins in 1870, Mycroft is all of 23. That puts his birth year in 1847 – which would make Sherlock a young 16. We think of these characters based on the Sidney Paget drawings from The Strand Magazine, but if they must have been young once. 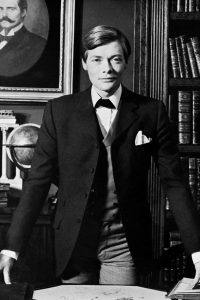 (I have a picture in my head of Mycroft as he’s described in this book, and he looks a lot like Simon Ward as Young Winston Churchill.)

Mycroft begins this story very young indeed, not just in years, but in naivete. (Another sentence I never expected to write.) A reviewer referred to this as being the story of Mycroft in his “salad days” and that feels right. The comment about “salad days” is from Shakespeare, as said by Cleopatra in the play Antony and Cleopatra, “my salad days, when I was green in judgment…” And so Mycroft is. So much of what sets Mycroft off on his quest is his complete misunderstanding of the character and nature of the woman he believes he loves. Even Sherlock points out his lack of clear sight when it comes to Georgiana, and he’s only 16. The more mature Douglas has doubts about the young lady from the very beginning. And they are both right.

This may be the last time that Mycroft is ever wrong about anything. He certainly learns his lesson – perhaps a bit too well.

The case that Mycroft and Douglas investigate is as much a part of its time and place as the Sherlock Holmes stories are of Victorian London. As Mycroft does what he does so well, pulling the threads of monetary exchanges, political double-dealing and government corruption, he and Douglas find themselves in the middle of a plot to enslave a new generation of black men and women in a nefarious enterprise where it seems that all the players are doing their best to pretend that they are not actually slavers.

But they are. And Mycroft and Douglas, with the help of some surprising allies, set out to stop them at all costs. And it’s terrible and harrowing and marvelous and necessary and right. This is a story that introduces a marvelous and fascinating character in Douglas, and provides new insights into the familiar character of Mycroft while telling a cracking good story. 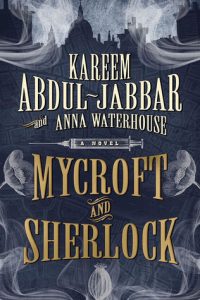 There’s a sequel coming out this fall. In fact, I was led to this book by a promo for the upcoming title, Mycroft and Sherlock. And I can’t wait.