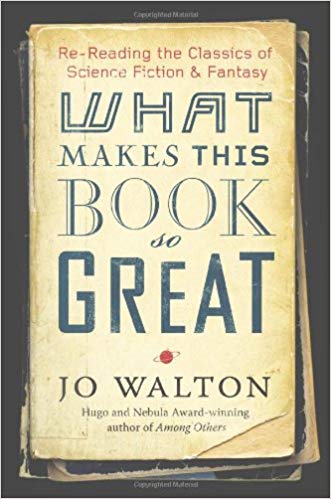 As any reader of Jo Walton’s Among Others might guess, Walton is both an inveterate reader of SF and fantasy, and a chronic re-reader of books. In 2008, then-new science-fiction mega-site Tor.com asked Walton to blog regularly about her re-reading—about all kinds of older fantasy and SF, ranging from acknowledged classics, to guilty pleasures, to forgotten oddities and gems. These posts have consistently been among the most popular features of Tor.com. Now this volumes presents a selection of the best of them, ranging from short essays to long reassessments of some of the field’s most ambitious series.

Among Walton’s many subjects here are the Zones of Thought novels of Vernor Vinge; the question of what genre readers mean by “mainstream”; the underappreciated SF adventures of C. J. Cherryh; the field’s many approaches to time travel; the masterful science fiction of Samuel R. Delany; Salman Rushdie’s Midnight’s Children; the early Hainish novels of Ursula K. Le Guin; and a Robert A. Heinlein novel you have most certainly never read.

Over 130 essays in all, What Makes This Book So Great is an immensely readable, engaging collection of provocative, opinionated thoughts about past and present-day fantasy and science fiction, from one of our best writers. 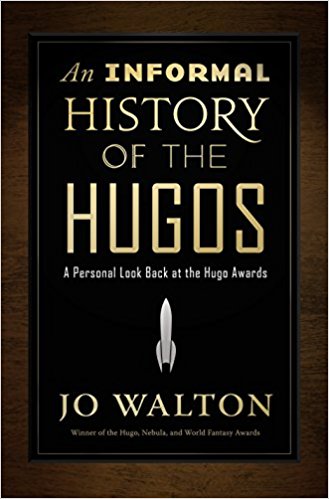 The Hugo Awards, named after pioneer science-fiction publisher Hugo Gernsback, and voted on by members of the World Science Fiction Society, have been given out since 1953. They are widely considered the most prestigious award in science fiction.

Between 2010 and 2013, Jo Walton wrote a series of posts for Tor.com, surveying the Hugo finalists and winners from the award’s inception up to the year 2000. Her contention was that each year’s full set of finalists generally tells a meaningful story about the state of science fiction at that time.

Walton’s cheerfully opinionated and vastly well-informed posts provoked valuable conversation among the field’s historians. Now these posts, lightly revised, have been gathered into this book, along with a small selection of the comments posted by SF luminaries such as Rich Horton, Gardner Dozois, and the late David G. Hartwell.

Engaged, passionate, and consistently entertaining, this is a book for the many who enjoyed Walton’s previous collection of writing from Tor.com, the Locus Award-winning What Makes This Book So Great.

I read these in reverse order. I started reading An Informal History of the Hugos while I was at Worldcon, anticipating the upcoming Hugo Awards ceremony. I was also looking for something big that I wouldn’t have to write up in the middle of the con, because that just wasn’t happening.

But once I finished the book, especially after attending a panel hosted by the author that covered which great books in 2017 did not make the Hugo Ballot, I wasn’t ready to quit. And there was another book just waiting for me.

Admittedly, it was just a bit surreal reading about what made older books so great while I was waiting for panels to start that talked about what new books were/would be so great. But it was a good kind of surreal.

After one panel where I wanted to buy “all the things” and started doing so on Amazon as the panel was running, I finally figured out that might be a bit much, even for me. So I started a list that just got longer and longer and LONGER as the con went on.

Something to look forward to.

But right now I’m looking back at two very interesting books that just go together, not only because they were written by the same person.

Both of these books are, in their own way, a bit meta. They are books that talk about books. They also talk about the joys of, and the experience of, reading. If either one of those is your jam, they make for marvelous reads. They are also great to dip in and out of. While both books are rather long, they are divided up into short, easily digestible – or dippable – sections.

But while there are similarities, there are also differences.

What Makes This Book So Great is very personal. The book is made up of a series of blog posts that were originally posted at Tor.com, but this is, unquestionably, the author’s point of view. Like all readers, she loves what she loves, and also hates what she hates. And isn’t one bit shy about explaining about either.

Even when I disagreed with her, and I often did, this was fun to read because it felt like we had similar experiences of reading and thoughts about reading and its joys. Even if I occasionally wondered what she was thinking about certain books. There are some arguments I would just love to have, as well as some books I’ve passed by that suddenly sound awfully interesting. 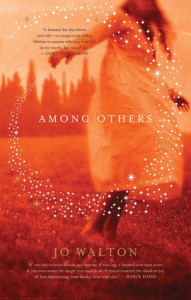 If you read and loved Among Others, this book will feel strangely familiar. It was obvious in Among Others that this was an author who loved the genre and had read extremely widely in it. This book feels like just the tip of that reading iceberg – which must be enormous.

An Informal History of the Hugos is a bit less personal, but no less interesting. The Hugos began in 1955, and have been presented annually every since. We know what won, and what it won for. For the past several decades we also know what was nominated. And it’s not difficult to figure out what was eligible in any given year, even those earliest years – even if it is a pain for the pre-internet years.

This book does not set out to provide the author’s opinion about what should have won in any given year – not that we don’t get a lovely slice of that. Instead, it looks at what was eligible in each year, what got nominated (if available), what won other awards that year (if applicable) and what won the Hugo. And attempts to determine whether what appeared on the Hugo ballot was of decent quality and reasonably represented the state of the field that year.

It makes for a fun to read time capsule of SF history. As someone who has been reading SF for a long time, but not for the span of the awards, I have to admit that the discussion of the earliest years felt a bit academic, or at least distant, at least to me.

When the book really picks up for me turned out to be 1971. I was 14, reading more fantasy than SF, but some of each. And most importantly, had enough of an allowance to spend on books. So that’s the point where I remember seeing things in the racks, even if I didn’t buy them myself (or check them out of the local library).

I was fascinated from that point forward, seeing what else was available that I missed or wasn’t ready for or couldn’t afford. And it was cool to not just read each year afterwards, but to see how many of the eligible books I had read at the time. It brought back a lot of fond memories.

And I still have some of those books.

The author stopped in 2000, ironically the first year I attended Worldcon. While her reasons make sense, a part of me wishes she had continued. I’d love to read what she thought of the nominees and winners earlier in this decade, during the puppy farrago. Maybe we’ll see those posts in another decade or so, after the dust has settled a bit.

But part of what makes this book so fascinating is its premise – and her conclusions. Did the Hugo voters mostly represent the field? Were most of the nominees of high enough quality to justify their inclusion on the ballot? Were there some books that seem blindingly obvious in retrospect that were completely overlooked at the time? Did they occasionally miss the boat, or not merely the boat but also the body of water it was floating on?

The answer makes for an interesting – and highly debate worthy – yes all the way around. Read it and see if you agree.

Ratings: I’m not sure whether these qualify for “Escape” or “Reality” ratings. I was surprised at how much I lost myself inside each book. But at the same time, they are very meta, nonfiction about fiction.

There’s no question that you have to be a genre fan to be interested in An Informal History of the Hugos. What Makes This Book So Great is mostly, but not completely, SF and fantasy. (I loved the commentary on one of my all-time favorite books, Gaudy Night by Dorothy L. Sayers).It also has a lot to say about the joys and experience of reading, regardless of genre, so it will be of interest to anyone who likes to read about reading, and is open-minded, or at least less particular, about genre.

Whether an escape, reality, or a bit of both, I put both of these books on the B+/A- fence.

4 thoughts on “Review: What Makes This Book So Great / An Informal History of the Hugos by Jo Walton”