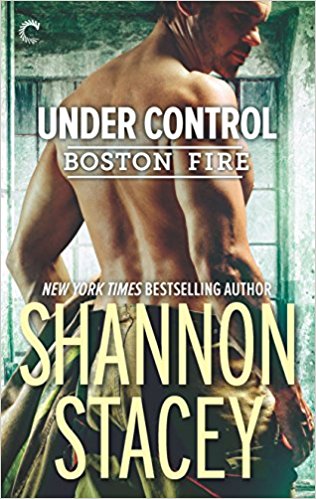 When faced with the opportunity to change shifts while staying in the same house, veteran firefighter Derek Gilman jumps at the chance. His new schedule means not working Saturdays, which means more time to spend with his two kids. His divorce may have been amicable, but being a firefighter and a single dad is a lot to juggle. And when fate brings a gorgeous, wealthy woman into his life, he’s pretty sure he can’t handle more than he already is.

Olivia McGovern loves plans. She planned to start her own business and planned its growth. It’s earning her seven figures now, but her personal life simply doesn’t exist. Getting trapped in a broken elevator figures in exactly nowhere, and freaking out in front of a sexy firefighter definitely isn’t on the agenda. Especially not one with two kids and an ex.

What would have been a random incident with an attractive stranger becomes something more when a charity event brings them back together. They’re from different sides of the tracks, literally—with friends, family and careers to consider. But as Derek and Olivia are discovering, chemistry doesn’t allow for plans, and love doesn’t bother with logistics.

This was fun. And sometimes that’s just what a girl needs.

Not that Olivia doesn’t need a bit more – even if she doesn’t know it. And it’s both a surprise and not that she doesn’t – because Olivia is all about knowing what she’s doing, what she’s going to do, what she has to do and what she ought to do to keep her life on the track that she’s set it on.

In other words, Olivia is all about the thinking and planning, and not so much on the living. She’s too much in control of her life to actually enjoy it or even just live it.

Derek is not so much about control. Not at all. But it’s reasonable from where he sits. Or stands. Or runs towards the fire.

Derek is a firefighter, just like all of the heroes (and his friends, neighbors and buddies) in his ladder company and the Boston Fire series. He’s good at his job – very good – but his job is to deal with whatever happens when he’s on shift. As a firefighter he never knows what that will be from one day or even one hour to the next.

And while he believes he’s not very good at planning the other parts of his life, he actually is. Because he’s juggling divorced parenthood with his ex and handling volunteer efforts with a local charity that helps parents and siblings of critically ill children. He also has friends and family and a life that he lives to the fullest.

When Olivia and Derek get stuck in an elevator together, neither of them has any clue that the other is the missing puzzle piece in their life. Even their sizzling chemistry can’t completely disguise the fact that their lives just don’t seem to fit.

They live and work at least an hour apart – in good traffic, which Boston never has. They’re also from, not exactly different sides of the tracks, but different socioeconomic strata. Olivia is clearly somewhere at the upper end of upper middle class. She’s earned every penny of it with hard work on her own business, but she lives a completely different lifestyle from working class firefighter Derek and his friends.

She’s also the scarred survivor of her parents’ acrimonious divorce. Even years later she’s still stuck in the middle playing peacemaker between two people who just can’t seem to let go of the grudges that ended their marriage.

Derek is the very participatory father of his two children. He and his ex are not merely cordial, but actually good friends. His ex and her new husband are still part of the neighborhood and part of Derek’s life.

Can they meet somewhere in the middle?

Escape Rating B: In a lot of ways, this is a quiet kind of a romance. While the initial meeting between Derek and Olivia qualifies as a “meet cute” and their second meeting feels like a bit of divine providence, most of what happens between them seems both quiet and cautious.

As it should be. They are both grown-ups. Not merely 20 somethings but mid-30-somethings – or perhaps a bit more. They have lives, careers, families and friends. Neither of them has been waiting for their life to happen.

What that means is that they both have a lot invested in their lives before they meet. And while they certainly fall in lust at first sight if not love at first sight, that doesn’t necessarily change the rest of their lives.

So what we see is Olivia and Derek negotiating the steps that could turn their intense chemistry into a whole lot more. But it is a negotiation, and that’s where they realistically almost fail.

We always want to see the hero and heroine, or at least one of them, give up everything for each other. And that’s even possible for people just starting out. But Olivia and Derek aren’t just starting out in life, and in order for any relationship between them to work they have to be able to fit into each other’s worlds.

Derek, on the one hand, has a lot of people. He rightfully wants to be there for his kids. His fire company is more of an extended family than a work crew. Olivia needs to be able to both fit in with those groups and find a way to handle the stress of his job – along with the danger that comes with it.

Olivia is a self-made woman. She seems to have started out in the middle class, but her own drive and determination have made her into a high-powered and highly paid business efficiency consultant. She’s the author of a best-selling book and is working on a second book. She has a plan for her life and that plan has brought her both success and wealth – and she shouldn’t be ashamed of either.

While Olivia needs to make adjustments in her plan and her life in order to fit anyone else in at all, Derek needs to adjust his attitude. He keeps thinking that Olivia is out of his league, without ever asking what she thinks in that regard. If he keeps listening to that voice, he’ll decide it’s right, and lose the second best thing that ever happened to him. (His kids are the first best thing, after all).

It is surprisingly interesting, as well as heartwarming, to watch them take two steps forward and one step back, figuring out how to blend their two very different lives together.

To celebrate the release of UNDER CONTROL by Shannon Stacey, we’re giving away a $25 Amazon gift card to one lucky winner!

GIVEAWAY TERMS & CONDITIONS:  Open to internationally. One winner will receive a $25 Amazon gift card. This giveaway is administered by Pure Textuality PR on behalf of Carina Press.  Giveaway ends 9/11/2018 @ 11:59pm EST. Limit one entry per reader. Duplicates will be deleted.