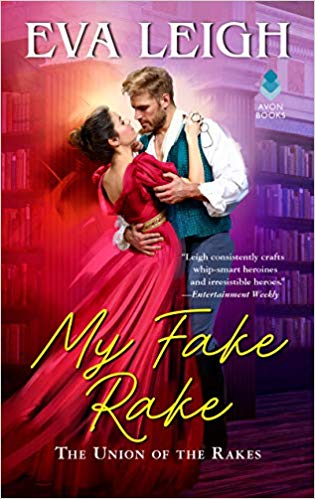 In the first book in Eva Leigh's new Union of the Rakes series, a bluestocking hires a faux suitor to help her land an ideal husband only to be blindsided by real desire…

Lady Grace Wyatt is content as a wallflower, focusing on scientific pursuits rather than the complications of society matches. But when a handsome, celebrated naturalist returns from abroad, Grace wishes, for once, to be noticed. Her solution: to "build" the perfect man, who will court her publicly and help her catch his eye. Grace's colleague, anthropologist Sebastian Holloway, is just the blank slate she requires.

In exchange for funding his passage on an expedition leaving London in a few months, Sebastian allows Grace to transform him from a bespectacled, bookish academic into a dashing—albeit fake—rake. Between secret lessons on how to be a rogue and exaggerated public flirtations, Grace's feelings for Sebastian grow from friendship into undeniable, inconvenient, real attraction. If only she hadn't hired him to help her marry someone else...

Sebastian is in love with brilliant, beautiful Grace, but their bargain is complete, and she desires another. Yet when he's faced with losing her forever, Sebastian will do whatever it takes to tell her the truth, even if it means risking his own future—and his heart.

In nature, it is often the male of the species who displays the bright plumage, while the female sports shades of beige and grey and is capable of hiding in the shadows. Just look at the difference between a peacock and a peahen for an obvious example.

Examples from the natural world feel like “natural” parallels for this story as both the hero and the heroine of this tale are natural scientists, as the term was in their time. Sebastian Holloway studies the behaviors of people – at least when he can get the funds, and Lady Grace Wyatt studies reptiles and amphibians – at least as long as her parents will let her.

The story in My Fake Rake tiptoes through several romantic tropes on its way to reaching its happy ending. But it begins in the past – or at least in Sebastian Holloway’s past. A time when, at Eton, the son of a rich manufacturer and not a son of the aristocracy like his schoolmates, the scientifically bent Sebastian found himself in all day detention for, of all things, defacing library books. Which I admit, should be a crime.

But he served that detention with some of those scions of the aristocracy who usually shunned him – and found himself in a lifelong friendship with his fellow sufferers. The Union of the Rakes that provides the title for this series reads a bit like a Regency version of The Breakfast Club!

Now Sebastian is an adult, as are his friends. And his penchant for arguing with the contents of his library books has turned into a lifelong love of science that his practical father refuses to support. He has to scrape pennies to fund his bookish habits and his anthropological expeditions.

It’s at his favorite scientific subscription library that Sebastian became friends with Lady Grace Wyatt, daughter of the Earl of Pembroke. Lady Grace, like Sebastian, is a scientist, but her specialty is herpetology, the study of amphibians and reptiles. So far, her family has supported her bluestocking tendencies, but her father’s sudden illness has made her parents rethink – not their support – but the need for someone to secure their daughter’s future.

They want her to marry. She wants to marry Mason Fredericks, a fellow scientist, a member of the aristocracy, and a man who seems to have no end of funds with which to pursue his many expeditions. Marrying Fredericks will allow her to continue her own scientific endeavors as his partner – where most men would tolerate her proclivities at best and forbid them at worst.

All she needs to do is to get Fredericks to notice her as a woman and not just as a fellow scientist. And for that, she needs the help of her good friend Sebastian. If Sebastian can pretend to be both interested in Grace and a man to be envied by other men – in other words – a confident rake – Fredericks will find her more “valuable” because another man values her.

It’s an idea that makes Grace a bit sick, but she knows it will work. If Sebastian is willing. And able to set aside his crippling shyness. And if both of them can manage to ignore anything they might feel for each other beyond friendship.

Escape Rating B: After that “Breakfast Club” opening, the pursuit of My Fake Rake, and the fake rake’s pursuit of his lady, runs through four different romantic tropes on its way to its happy ending – and does so with a certain amount of aplomb.

Some of that aplomb is supplied by Sebastian’s friend the Duke of Rotherby, who provides the money for Sebastian’s rakish wardrobe as well as the lessons needed for Sebastian to acquire a veneer of the confidence that a true rake wields without a moment’s thought.

But at its heart My Fake Rake is a friends into lovers story. Grace and Sebastian have known each other for four years when the story takes place. They share a love of scientific exploration and discovery and a shared bent for intelligent conversation and quiet reading. They like each other, they spend time together, and they enjoy each other’s company.

And they know each other well enough that Sebastian knows that Grace has a tendre for Fredericks and she doesn’t hesitate to ask him for what is really a rather huge favor.

That favor tips the story into the second and third tropes, the fake relationship combined with the extreme makeover/Pygmalion/My Fair Lady trope. One of the refreshing things about this story is that it’s really “My Fair Gentleman” as it’s Sebastian who needs to be made over in this scheme. Grace is just fine as she is. She’s hidden her beauty behind her mind, not a pair of spectacles – although Sebastian certainly hides his handsome face behind his.

When their scheme works, and a bit too well, they also separately discover that the parts they have played have become real – as so often happens in stories based on a fake relationship. The issue for Grace and Sebastian is that they then trip headlong into an epic misunderstandammit that takes him to Northumberland and nearly takes her to Greenland.

While it feels as if it’s more like societal expectations have pushed them into their costly and painful silence, I always find the angst involved in a misunderstandammit a bit hard to take. In this case it takes an epic rescue worthy of any rake reformed to get this romance back on track.

So even though they nearly lost each other when a simple honest conversation would have gotten them past their stumbling block, I did understand why they both felt like they weren’t in a position where they could have that conversation.

It takes the Duke of Rotherby, a romantically inclined yacht and a desperate climb up a wet, swaying rope to get our hero and heroine back where they belong.

A terrific time is finally had by all – except the Duke of Rotherby. Lucky for him, the next book in the series, Would I Lie to the Duke, will give him his own happy ever after. He’s certainly earned it by his efforts in this story!

To celebrate the release of My Fake Rake by Eva Leigh, we’re giving away three paperback copies of the book!

GIVEAWAY TERMS & CONDITIONS: Open to US shipping addresses only. Three winners will each receive a paperback copy of My Fake Rake by Eva Leigh. This giveaway is administered by Pure Textuality PR on behalf of Avon Romance. Giveaway ends 12/15/2019 @ 11:59pm EST. Avon Romance will send the winning copy out to the winner directly.

One thought on “Review: My Fake Rake by Eva Leigh + Giveaway”