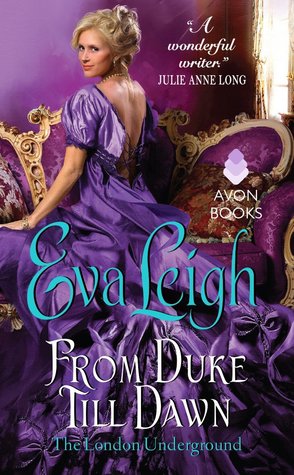 Eva Leigh launches a seductive new series that sizzles with the dark secrets of London’s underworld...
Years ago, the Duke of Greyland gave his heart—and a princely sum of money—to a charming, destitute widow with unparalleled beauty. After one passionate night, she slipped from his bed and vanished without a trace. And just when he’s given up hope of ever seeing her again, Greyland finds her managing a gaming hell. He’s desperate to have her… until he discovers everything about his long-lost lover was a lie.
In truth, Cassandra Blake grew up on the streets, picking pockets to survive. Greyland was a mark—to be fleeced and forgotten—but her feelings for the duke became all too real. Once he learns of her deception, however, the heat in his eyes turns to ice. When her business partner absconds with the gaming hell proceeds—leaving unsavory investors out for blood—Cassandra must beg the man she betrayed for help.
Greyland wants compensation, too, and he’ll assist her under one condition: she doesn’t leave his sight until her debts are paid. But it’s not long before the real Cassandra—the smart, streetwise criminal—is stealing his heart all over again.

Eva Leigh is also Zoe Archer, and I absolutely love Zoe Archer’s action/adventure/historical and occasionally paranormal and/or sci-fi romances, so I’m all in for her historicals. One of the things she does best is write unconventional and truly kick-ass (sometimes literally) heroines and fit them into the setting she has created.

And that is absolutely true in From Duke Till Dawn. While the Duke in the title, Alex Greyland, really, really truly needs to have the stick up his ass surgically removed, swindler Cassandra Blake is just the woman to do it. After all, she’s done it before. It’s just that the operation didn’t “stick”, because she couldn’t either.

The story here is a combination of opposites attract with a heaping helping of personal discovery. And once it gets out of the gate, it’s marvelous.

These are two people who never should have met. Or at least not met with any honesty at all between them. Cassandra is a high-class swindler. Or rather, she is now. She started out as a child in debtor’s prison, because that’s where her dad ended his days. Once he died, she lost even that dubious roof over her head, and has been making her way, mostly alone, ever since.

That’s how she met Alex Greyland. She conned him out of 500 pounds, rather a princely sum during the Regency. She pretended to be a proud but impoverished gentleman’s widow, cheated out of her portion by unscrupulous relatives. Alex fell for the story hook, line and sinker, while also falling for the proud and beautiful young widow.

From Cassandra’s perspective, Alex should have been just a mark, to fleece and forget the minute she scarpered away. Instead, she fell into his bed, and made the mistake of letting him into her heart. By the time she ran, it was too late for both of them.

When they meet again, Cassie is still playing the proud but impoverished widow, this time as the hostess of an exclusive gaming hell. But just as Alex discovers her secret, her whole world crashes around her. Her partner has left her high and dry, stealing all the money the hell has collection and leaving her to face all the employees and, even more dangerously, all of their underworld backers.

The only way for Cassie to escape with her life is to turn to Alex, the one man who knows who and what she really is, even if he hates her for it. He can protect her long enough for her to find her missing partner and get out from under the life-threatening situation he has left her in.

But Alex finds it impossible to hate the one woman who has ever made him feel, and Cassie can’t keep herself away from the only man who has ever known her as she truly is. It’s a dangerous game they are playing – with the underworld, and with each other.

And it can only end in heartbreak. After all, not even a duke can defy society and marry a criminal.

Escape Rating B+: It takes a while for this one to get going. When they meet again, Alex is still playing the lovelorn duke, and Cassie pretending to be the poor but proud widow. Alex, of course, truly is lovelorn, even if he can’t admit it, but Cassie is anything but who she is pretending to be.

What I wasn’t expecting, but should have, is just how much the book changes, and for the better, when Alex discovers Cassie’s secret. At that instant, he naturally feels betrayed, as well as incredibly angry, but for the first time in the story he stops listening to the voice of his father in his head telling him how a duke is supposed to behave and just lets himself feel what he actually feels, and not what he thinks he should.

And that’s what makes the book. Cassie is who she has always been, the difference is that she can finally let someone else see that person. But for Alex, the revelation is that he finally gets a handle on who he is and what he wants, rather than what he should do or what he should want. The longer he is with Cassie, the more out-of-his-element situations she throws him into, the more of himself he discovers.

The other thing that Cassie does for Alex is pull the blinders from his eyes. He’s never stepped outside his own extremely privileged world. He honestly does want to help people and make the world a better place than he found it, but he has no idea what will really help or how difficult the situation really is for those less privileged than himself.

As she always does, this author has created a very unconventional heroine who still manages to feel a part of her time and place, along with a hero who needs her to be exactly who she is. I can’t wait for the rest of this series.

While I wait, I’m going back to finish the author’s Wicked Quills of London series. I loved Forever Your Earl, but the rest got sucked into the “so many books, so little time” vortex. As much as I enjoyed From Duke Till Dawn, I’m happy to check out Scandal Takes the Stage while I wait for my next trip to the London Underground.

2 thoughts on “Review: From Duke Till Dawn by Eva Leigh + Giveaway”