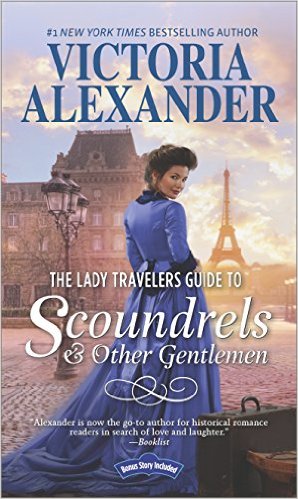 Embark on the breathtaking romantic adventures of The Lady Travelers Society in the brand-new series by #1 New York Times bestselling author Victoria Alexander
Really, it's too much to expect any normal man to behave like a staid accountant in order to inherit the fortune he deserves to support the lifestyle of an earl. So when Derek Saunders's favorite elderly aunt and her ill-conceived—and possibly fraudulent—Lady Travelers Society loses one of their members, what's a man to do but step up to the challenge? Now he's escorting the world's most maddening woman to the world's most romantic city to find her missing relative.
While India Prendergast only suspects his organization defrauds gullible travelers, she's certain a man with as scandalous a reputation as Derek Saunders cannot be trusted any farther than the distance around his very broad shoulders. As she struggles not to be distracted by his wicked smile and the allure of Paris, instead of finding a lost lady traveler, India just may lose her head, her luggage and her heart.

This is my second book in a row where one of the main characters begins the story desperately requiring the surgical removal of a seemingly permanent stick shoved up their fundament. As in today’s story that’s the heroine rather than the hero, I’m being a bit more delicate in my language referring to the deformity.

She is also both extremely judgmental and an unbearable know-it-all, and not in the useful way that Hermione Granger was a know-it-all. Miss Prendergast’s version of omniscience is that she has made rather firm decisions on exactly how the world works, according to her designs, and that she is always right in all of her judgements. Which are very exacting.

She’s great at managing things and people, but not very lovable. Or even likeable. And she’s certainly not terribly forgiving. Or much fun.

In the case that begins the story, she is both right and wrong, but not, as she discovers at the end, in any of the ways she expects.

Her cousin Heloise, the woman who raised her after her parents death, has gone missing. Or so it seems. Heloise, a middle-aged spinster with a small but secure income, has become a member of The Lady Travelers Society, and after consulting with the Society, has planned a solo (well, solo with her lady’s maid) European tour of indeterminate length and rather sketchy itinerary.

As the story begins, India has not heard from Heloise in over six weeks, and her inquiries to the Lady Travelers Society, increasingly frantic and belligerent, have gone unanswered. As the police have been thoroughly dismissive and unhelpful, India is taking matters into her own hands.

She has investigated the Lady Travelers Society and has discovered that there is a fraud afoot. In her decided opinion, the three elderly ladies who appear to be running the Society, using the term “running” very, very loosely, are covering a scam. They seem much too dithery to be the masterminds of such a pernicious scheme to separate women of limited means from both their pounds sterling and their dreams of travel.

India is certain she has discovered that mastermind in Derek Saunders. Mr. Saunders, on the other hand, has just discovered that his great aunt and her two friends are, in fact, perpetuating a fraud in order to maintain their independence as widows. He’s there to put a stop to what India believes he is the mastermind of.

But they both need to find cousin Heloise, both for India’s peace of mind and for Derek to keep his great aunt and her cronies out of jail, or at least free from scandal.

India’s distrustful nature won’t allow her to let Derek search for her wayward cousin, as she believes Heloise’s waywardness is ultimately his fault. And he can’t let India go off investigating on her own in Paris, because if anything happens to her, society will certainly hold him responsible, even if he was not responsible for the original scheme that got them all into this mess.

And his great aunt and her cronies are very definitely matchmaking. Not that India and Derek don’t need their guiding, if slightly guilty, hands.

It’s up to them to not screw up their best chance at happiness. Their escapades prove that they both need all the help that they can get.

Escape Rating B: This story is solidly good fun, but the portrayal of the heroine in the first half of the story does make the reader want to shake her. India at the outset, while extremely effective, is also intensely annoying. Her self-righteousness sets the reader’s teeth on edge, as it does that of nearly every character she meets in the story.

On that other hand, one of the terrific things about this story is the heroine’s journey. The hero has already gotten most of the way to where he needs to be, courtesy of a swift kick to the posterior delivered by his uncle several months before the story begins. Derek, while he has not lost his sense of fun and adventure, has grown up after being threatened with being cut off from his inheritance. And it’s been the making of him.

Meanwhile, none of India’s acquaintances nor her (very) few friends have been willing to risk her judgemental nature long enough to tell her that she generally goes well beyond holding up standards into outright rudeness. She never gives anyone the benefit of the doubt, and makes no allowances for any human frailty on anyone’s part, including her own. Because of course she believes she has none.

And that’s where the story really lies. India doesn’t so much need to grow up as to just grow. Or the wooden puppet needs to become a real girl. Not necessarily in the sense of enjoying fashion or shopping or any of the things that women were supposed to enjoy in the late Victorian era, although she does come to that, but grow in the sense of accepting others. She can be kind without being judge-y, if she can finally admit that no one, including herself, is right all the damn time.

The setting of this story is marvelous. It is Paris in 1889, at the beginning of the 1889 World’s Fair. Some of the best and most evocative scenes in the story take place at the top of the newly opened and still quite controversial Eiffel Tower.

All in all, this is a lovely story of wheels within wheels, featuring an intelligent (if bull-headed) heroine and set in a marvelous place and time. And there will be more! The Lady Travelers Guide to Larceny with a Dashing Stranger is coming in November.

3 thoughts on “Review: The Lady Travelers Guide to Scoundrels & Other Gentlemen by Victoria Alexander”