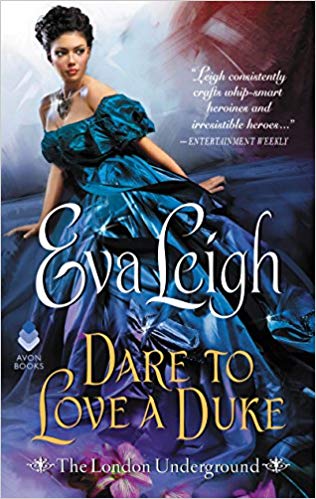 For a dashing duke and the proprietress of a secret, sensual club in the London Underground, passion could lead to love… if they dare

Thomas Powell, the new Duke of Northfield, knows he should be proper and principled, like his father. No more dueling, or carousing, or frequenting masked parties where Londoners indulge their wildest desires. But he’s not ready to give up his freedom just yet. The club is an escape, a place where he can forget about society and the weight of his title… and see her, the woman he’s wanted forever.

Lucia—known as Amina—manages the Orchid Club, a secret society where fantasies become reality. But for Lucia, it’s strictly business, profitable enough to finance her dream: a home for the lost girls of the streets. Surrounded by lovers, she only observes, unwilling risk her future for any man. No member has ever intrigued her...until him, the masked stranger whose heated looks sear her skin. After months of suppressed longing, they dare to give in to temptation…

But the late duke’s legacy comes with a shocking secret, and the scandal threatens to destroy everything Tom loves… his family, the Orchid Club, and even Lucia. 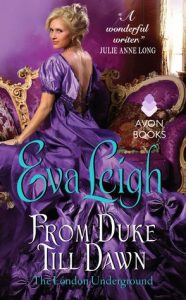 This is the third book in the author’s London Underground series, and it makes a fine and fitting conclusion to that series. But it also works as a standalone. The story in this entry bears some resemblance to the circumstances in the first two (From Duke Till Dawn and Counting on a Countess) but the reader knowing where they are and who the characters are in Dare to Love a Duke is not dependent on having read the other books first.

Not that they are not a lot of fun in their own right!

As has been true in the previous books in the series, the romance here is between a newly minted nobleman and a woman of not merely lesser rank and status but also someone who has been operating on the shady side of the street in one way or another. The heroine of From Duke Till Dawn is a confidence trickster, while the heroine of Counting on a Countess is a smuggler. There weren’t a lot of legal, well-paying professions for women during the Regency, or let’s face it, for centuries before or after.

The heroine of Dare to Love a Duke is the manager of an unusual but not exclusive sex club. A club that admits anyone and everyone. All the participants are masked. Anything goes, and anyone can have sex with anyone else – or multiple anyone elses. The only requirement is that consent is king, queen and knave. People can, and do, do whatever they want – but only what they want. No force, no coercion, no “persuasion”. Only freely given consent.

The hero is the newly invested Duke of Northfield. His father has just died and Tom has inherited the title, along with a whole slew of expectations and a tonne of responsibility. On what he believed was his last night of relative freedom, he finally seduces, or is seduced by, or they both simply give in to the sexual chemistry that has always swirled between himself and Lucia, the manager of the Orchid Club.

Only to discover the following morning that his father can’t possibly have been the paragon of virtue that he claimed to be – because Lucia comes to the Duke of Northfield’s house to deliver the monthly profits from her club which he owns – only to discover that the new duke is the man she just spent a long and very pleasurable night with.

The situation is a mess. If it comes out, it will be a scandal that will affect his mother’s place in society and his sister’s prospects for marriage – not that those aren’t already threatened enough.

Tom’s father was a staunch Tory, a member of the conservative political faction that wants to preserve the status quo, keep power in the hands of the wealthy aristocrats, and oppress the poor, the nascent middle-class, and pretty much anyone else who isn’t one of them.

His father’s friends are pressuring him to remain in their faction, and are holding his sister’s marriage to the man she loves as hostage. Sparing her will force him to reject the stirrings of his own conscience.

When he can’t decide he turns to Lucia, spending a weekend in the house he owns while working incognito as one of the team. A few short days working himself to exhaustion, while spending blissful nights with Lucia, give him the space he needs to decide whose man he will be, and at what price.

The courage of his convictions nearly costs him everything – but it also gives him the greatest prize of all. 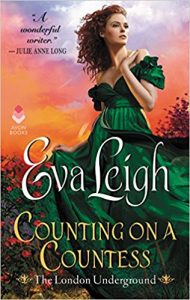 Escape Rating B+: Eva Leigh also writes action-adventure romances as Zoe Archer, or perhaps it’s more accurate to say that Zoe Archer also writes historical romances as Eva Leigh. In either case, one of the reasons that I love this author is that she does an excellent job of writing heroines who are able to kick ass, figuratively always and occasionally also literally, while still fitting into their time and place.

This is particularly important when it comes to historical romance. I’ve frequently talked about the tightrope walking involved in creating historical heroines with enough agency for 21st century readers to identify with while making sure that these standout women still feel like they fit into their setting. A book I reviewed last week failed to walk this tightrope, and when that happens it does break the willing suspension of disbelief At least for this reader.

Lucia has had a difficult life, and it’s a life that has left scars. She’s not a pampered princess in a gilded cage. She’s had to make her own way in the world since she was 12, and she’s done it any way she could. Including on her back. It’s brutal but it’s also realistic – there just weren’t that many options. Being forced to make her own way has given her very different attitudes from the kind of privileged ladies that have often been the heroines of historical romance. She knows how to take care of herself because she’s had to. And she’s all too aware that in the end she only has herself to rely upon. No one has ever rescued her, and until she meets Tom she has no reason to believe that anyone ever will.

She’s aware of what society thinks of her, but she’s also all too aware that pride and propriety will not fill an empty belly or keep a roof over one’s head. She tries not hurt anyone, but she does what she must and she lives with the consequences.

On the one hand, Tom has had an easy life. And on the other, he is suddenly weighed down by a huge responsibility – and it’s a responsibility he takes seriously. He knows that he’s privileged and he wants to use his position to make life better for others as much as he can. He’s between a rock and a hard place when his father’s old allies attempt to blackmail him into following their dictates instead of his conscience. His dilemma is made all too real by throwing his sister’s happiness under the carriage wheels rather than his own. He is caught between warring duties – his duty to protect his sister and his duty to help others.

It was a relief when he finally told his sister what his choices were and what the cost would be – and that she agreed with him all the way – as their mother initially does not. And when the feces hits the oscillating device his sister stands by him.

In the end, as with the other books in this series, the story is about the unconventional couple finding a way to defy convention, rise above it, and grab their happy ever after with all hands.

One thought on “Review: Dare to Love a Duke by Eva Leigh”