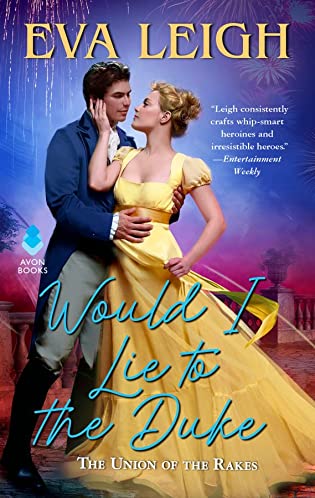 When an ambitious entrepreneur pretends to be a lady of means, she catches the eye—and heart—of a duke...

Jessica McGale's family business desperately needs investors, and she's determined to succeed at any cost. But she knows London's elite will never look twice at a humble farm girl like herself. Posing as “Lady Whitfield,” however, places her in the orbit of wealthy, powerful people—most notably the Duke of Rotherby. His influence and support could save her company, but Jess never expected the effect he'd have on her.
Society thinks Noel is a notorious, carefree duke who dabbles in investments, but there's a side to him that only his closest friends see. When he crosses paths with Lady Whitfield at a business bazaar, his world tilts on its axis. She's brilliant and compelling, and brings him to his knees like no woman has before. Trust is difficult for Noel, but Jess makes him believe anything is possible...
As time ticks down on her Cinderella scheme, the thought of achieving her goal at Noel's expense breaks Jess' heart. He doesn't just want her now, he wants her forever. But will her secret end their future before it begins?

If the title is a question, then the answer is definitely “yes” for Jess McGale, as is her answer to the question “would I lie with the duke?”. The problem is that Jess is still lying TO him while she’s lying WITH him, and that’s very nearly too much for anyone to forgive. Particularly a duke.

Jess is doing her best to save her family’s business and her family’s home. After a disastrous fire wiped out most of McGale and McGale’s soap making and packaging equipment, that business, a manufacturer of very-high quality honey-based soaps, is in dire straits. Jess and her two siblings don’t have enough money to replace the equipment, and with replacing the equipment the business can’t make enough soap to stay afloat.

As the eldest, Jess feels like the whole mess was dumped on her shoulders when their parents died not long before the fire. Even though, as both her brother and sister remind her frequently, neither of them are exactly in leading strings. One gets the impression that they are all somewhere in their 30s, making them all well into adulthood.

But Jess, having taken all the responsibility – whether rightly or not – also takes on all the desperation of figuring out one last chance to get them back on their feet. Her initial idea is to bring in money by serving as a paid-companion to an eccentric but well-heeled widow. 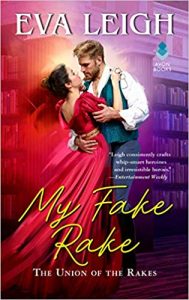 While preparing said widow’s London house for her imminent arrival, Jess decides to wager everything on one grand throw of the dice. She uses her own business acumen as well as her employer’s extensive wardrobe to inveigle herself into entrance to the exclusive investment club known as the Bazaar. She captures the attention – and the sexual interest – of the Duke of Rotherby, the enabling “Pygmalion” figure of the previous book in this series, My Fake Rake.

Noel may play the rake and the debauched aristocrat, but there’s a shrewd mind and a compassionate heart behind that air of lazy insouciance. Noel participates in the Bazaar to find ethical companies in which to invest his vast holdings. In “Lady Whitfield”, the part that Jess is playing to the hilt, he finds a woman whose mind is every bit as penetrating as his own, attached to a body that seems made for sin. A sin that Jess is more than willing to explore with him.

But she knows that the lie she is living can come between them at any moment, considering that she entered the Bazaar with the intent of surreptitiously acquiring one or more investors for her family’s business.

She just didn’t count on losing her heart in the process.

Escape Rating B+: I liked the first book in this series, My Fake Rake, I enjoyed Would I Lie to the Duke quite a bit more. I think because this story doesn’t fall into the kind of romantic misunderstandammit that the first book did.

Not that Noel and Jess don’t have an epic falling out before they reach their happy ever after, but the reason behind that falling out is one that is worth all the problems it causes. Jess has, after all, been lying to Noel for the entire story by that point. And while she should have told him the truth at least before they fell into bed together – or on any other flat surface that happened to be around – it’s understandable why she didn’t. She is, after all, protecting her family.

Another refreshing thing about this story is a trend that we’re seeing more and more of, and it’s one I really like. Jess isn’t herself part of the aristocracy. She’s not a titled lady. Jess is someone who works for her living, and works hard and professionally at that living.

Part of the reason I picked this book up this week was to see if it was in dialog with this week’s other historical romance, The Care and Feeding of Waspish Widows. And it is, a bit, in that both Agatha and Jess are women who have always worked, and are business owners or co-owners who make their own decisions and don’t conform to the aristocratic expectations of women not involving themselves in either the business or the politics of the day. And who have to grit their teeth and bear it every time a man talks over them or acts like they can’t possibly make the best decisions for themselves or understand the oh-so-terribly-complicated world in which they live and work.

At the same time, this is also a much more traditional romance, not just because Jess’ paramour is a man but also because he’s a duke, the traditional hero of historic romance. 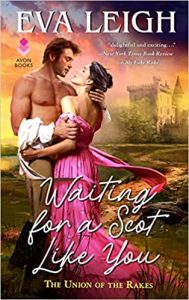 And yet, Noel is not traditional at all in his probing interest in investments and in his search for ethical companies in which to invest. While this isn’t the first historical romance to feature lords who use their minds as well as their capital to nurture new companies (Christy Carlyle’s Duke’s Den in the marvelous A Duke Changes Everything also features an investment club) this one is still a bit different in that the Bazaar and its denizens, while fascinating in themselves, are not the same people as the hero’s group of childhood friends who form the backbone of the series.

All in all, this was a delightful historical romance that had a lot of fun with its disguised heroine in plain sight as well as a bit of deliciously naughty romantic role-reversal.

And speaking of the members of the Bazaar in conjunction with Noel’s childhood friends, there’s certainly going to be an explosive meeting of members of those two groups in the next book in the series, Waiting for a Scot Like You, which is scheduled to warm up a winter’s night or two this coming February.