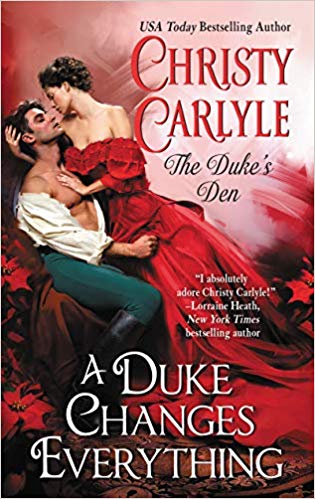 Nicholas Lyon gambled his way into a fortune and ownership of the most opulent, notorious gentlemen’s club in England. But when Nick’s cruel brother dies, he inherits a title he never wanted. The sooner Nick is rid of the estate that has always haunted him, the sooner he can return to the life he’s built in London. But there’s one obstacle—the exquisite Thomasina Thorne.

When the new heir to the Tremayne dukedom suddenly appears in Mina Thorne’s life, she’s flustered. Not only is he breathtakingly handsome, but he’s also determined to take away her home and position as steward of the Enderley estate. If Mina learns what makes the enigmatic duke tick, perhaps she can change his mind—as long as she doesn’t get too close to him.

With each day Nick spends with Mina, his resolve weakens as their colliding wills lead to explosive desire. Could she be the one woman who can help him finally bury the ghosts of his past?

There are multiple ways to interpret the title of this lovely historical romance, and all of them are equally applicable to the story.

It could be that BECOMING a duke changes everything, because it certainly does for Nick Lyon.

It could be that the ARRIVAL of a duke changes everything, because it definitely does that for both Thomasina (Mina) Thorne and the ducal estate at Enderley.

It could also be that the new duke himself, Nick Lyon, changes everything related to being a duke, to dealing with his own past and forging his own future.

And it’s a whole lot of fun every single step of the way.

There’s also just a bit of a “Beauty and the Beast” vibe to this story. Nick Lyon certainly thinks of himself as a beast. He isn’t but his late and unlamented father drummed the idea into him often enough – and left Nick with the physical as well as the emotional scars to make it seem all too inevitable.

Mina is every bit as practical a girl as Belle, and also very much in love with books, as the heroine of the Disney version of the story certainly was. There’s even Gaston-a-like in this tale if you squint a bit.

Mina and Nick begin on opposite sides. She has devoted her life to taking care of the estate, but most importantly its people. Nick’s plan is to strip the estate bare and rent it out to whoever will give him the most money. Not because he actually needs the money, but because he absolutely cannot stand the place. Every moment he is forced to spend there reminds him of the torment he and his mother suffered at the hands of his abusive father.

On the one hand, it’s hard to blame Nick for his feelings. And on the other, the old man is dead, as is Nick’s older brother. Any of the people who participated in or colluded with his abuse are dead and gone. He can’t make them suffer anymore. But abandoning his responsibilities will hurt the people of the estate and the nearby village.

Mina tries to make him see the place through her eyes of love and duty, while he tries to avoid letting her see the depth of his pain. When they manage to meet in the middle, the find a place where they can both belong – together.

Escape Rating A-: A Duke Changes Everything is an absolutely delightful historical romp – without being nearly as frothy as historical romances can sometimes be.

Just because no one talked about either child abuse or spousal abuse, doesn’t mean it didn’t happen in historical eras. It just wasn’t punished, at least not unless the spouse or the child had enough and either ran away and/or killed the perpetrator. Then the victims got punished.

Nick was beaten, starved, imprisoned and eventually escaped with the help of his mother and the butler. His mother died in exile in Paris and Nick lived by his wits, eventually returning to England and opening an extremely successful gambling den. He remakes himself completely, but never heals from the abuse. 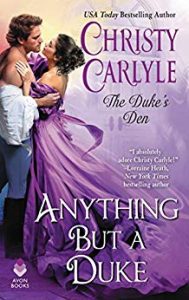 Mina was a child on the estate when Nick left, younger than he. And the sons of the duke, even if the duke believed that Nick was a bastard, did not associate with the daughter of the steward. Mina grew up in the same place Nick was tortured under the loving care (and occasionally benign neglect) of her father. When he died, she slid into his place – and Nick’s brother either didn’t notice or didn’t care.

What makes this story work so well is the way that they change each other’s lives. Mina gets Nick to see that his responsibilities don’t have to be the painful burden that they have been, and he gets her to see that she can both take care of her responsibilities and also let go enough to enjoy the world she’s always longed to see.

Part of what made this story so lovely was the way that it ended, as Nick and his partners decide – with a bit of a push from Mina – to change the focus of their gambling den from betting on games of chance to betting on inventors. The next book in the series, Anything But a Duke, looks like it will be loads of fun!

Reviewer’s Note: I KNOW I’ve read a book with a similar premise (Lord inherits estate and arrives to discover his steward is a woman) sometime in the not too distant past. I’ve been trying to find it, but so far, no joy. If you recognize it, please let me know in the comments. I’m going bananas!