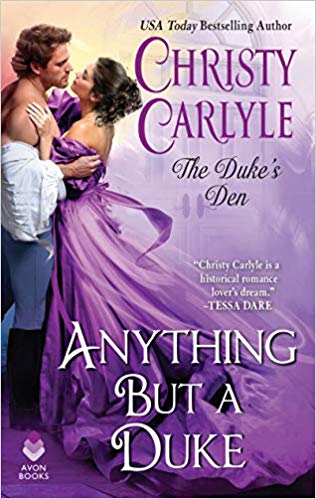 Self-made man Aidan Iverson has seen more closed doors in his thirty years than he’s ever cared to count. As a member of the elite Duke’s Den, he has all the money he could possibly need, but the one thing he can’t purchase is true power. If roguish Aidan can’t buy his way into society’s hallowed halls, he’ll resort to a more extreme measure: marriage.

Brought up to be a proper lady, the only thing Diana Ashby desires is to be left alone to the creation of her own devices. But when her dreams are crushed, she must find another way to secure the future of her invention. Knowing his desire to enter her world, Diana strikes a deal to arrange Aidan’s marriage to the perfect lady—as long as that lady isn’t her. She doesn’t need any distractions from her work, particularly of the sinfully handsome variety.

As Diana and Aidan set out to find him an aristocratic match, neither are prepared for the passion that ignites between them or the love they can’t ignore.

In the Duke’s Den, can happiness ever be a winning prospect? 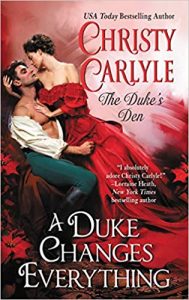 I picked up Anything But a Duke because I absolutely adored the first book in the Duke’s Den series, A Duke Changes Everything. So naturally I wanted to see what happened next to the Duke’s Den gambling den and investors’ club.

While the two things that go on in the Duke’s Den may seem like opposites, they also aren’t. Because the three owners of the Duke’s Den, Nicholas Lyon (hero of A Duke Changes Everything), Aiden Iverson (the hero of our current tale) and Rhys Forrester (presumably the hero of the next book) invest in inventions. Often very large inventions on a grand scale, but not always. But whether those inventions will succeed or fail is really just gambling under a different name – and a slightly more respectable one at that.

Diana Ashby has come to the Duke’s Den, just as inventors come to Shark Tank, to convince them to invest in her household, housewide, vacuuming system. It’s ingenious in its way, a system that once installed in an establishment, will vacuum every room with merely the priming of a suction pump.

While Diana is unable to immediately convince the members to invest in her device, she IS able to get a stay of execution on their refusal – because Aiden Iverson clumsily broke her model. And because once upon a time, not so very long ago, she saved his life.

There’s a spark that runs hot between them, so in a bit of self-deception they decide to use each other – as an excuse to remain in each other’s company just a bit longer.

Diana needs funding for her inventions. She’s under a deadline from her mother to either get funding within a month or finally throw herself into the “marriage mart”. Fully aware that marriage will probably make her miserable. Not that she might not want to get married and have a household and family of her own, but that under the current laws any husband can and probably will force her to stop inventing – and she needs to invent rather as much as she needs to breathe – possibly more.

Iverson needs to marry into the aristocracy. He has plenty of money, but his origins, both that they are common and that they are secret, keep him from the highest strata of society. And it’s that strata that controls memberships and inclusion into the areas that he needs to be in to bring the inventions he funds to their fullest potential.

They make a bargain. Diana will find Iverson an aristocratic wife, and he will fund her vacuum invention and help her find a buyer.

But no woman can live up to the fire in Diana, and no invention – no matter how successful – can make Diana feel as alive as Iverson does.

The question is whether they can step back from what they both said they wanted to what they truly need – each other.

Escape Rating B+: Anything But a Duke is a whole lot of fun. I’ll confess it’s not quite as much fun as A Duke Changes Everything (which was pretty amazeballs), but it is a terrific historical romance and I enjoyed every minute of it!

One of the things that I really liked about Anything But a Duke is that the characters, while part of the upper classes (that’s a whole ‘nother topic we won’t get into here) were neither of them actually titled members of the aristocracy.

Rather they were both upper-middle class, and both had mixed feelings and reactions about that situation. Diana feels stuck because she really wants to work on her inventions, but is being forced to submit to being “a lady” with all of the restrictions that are involved.

Meanwhile her brother is out drinking and gambling and wasting money that the family cannot publicly admit they don’t have. Diana’s mother needs her to make an “good” marriage to save the family from penury. (I have thoughts about her brother – and they are not complimentary thoughts in the slightest – but this isn’t his story.)

Iverson, on the other hand, is a self-made man. His mother abandoned both him and his sister to the workhouse. He’s not even sure that “Iverson” is his true name and has absolutely no idea who his father was. His lack of pedigree keeps him from getting into places that he needs to get into to further the inventions he invests in. He’s willing to make an arranged marriage, offering his money to save some aristocratic family’s position in order to get the entree into society he requires.

Diana and Iverson really do belong together. It’s obvious to the reader – in a very good way – and seems to be obvious to everyone except the two of them for the longest time. The way that the tension builds between them is delicious – even more so because it isn’t fake in any way but is inherent in the situation in which they have placed themselves.

And Diana is a wonderful character for 21st Century readers to identify with! I’m not sure her position is historically accurate, but it feels plausible enough to work – and work well.

One final note, there have been a rash of historical romances where the hero unexpectedly becomes a duke, with mixed results. Based on the title, I expected that to happen here, and I was so happy when it didn’t. Part of what makes Iverson so interesting is that he isn’t part of the nobility. I really liked seeing a hero and heroine who are not, were not and do not become aristocrats. It’s a refreshing change and I hope to see more of it!

To celebrate the release of ANYTHING BUT A DUKE by Christy Carlyle, we’re giving away one paperback set of A Duke Changes Everything and Anything But a Duke! 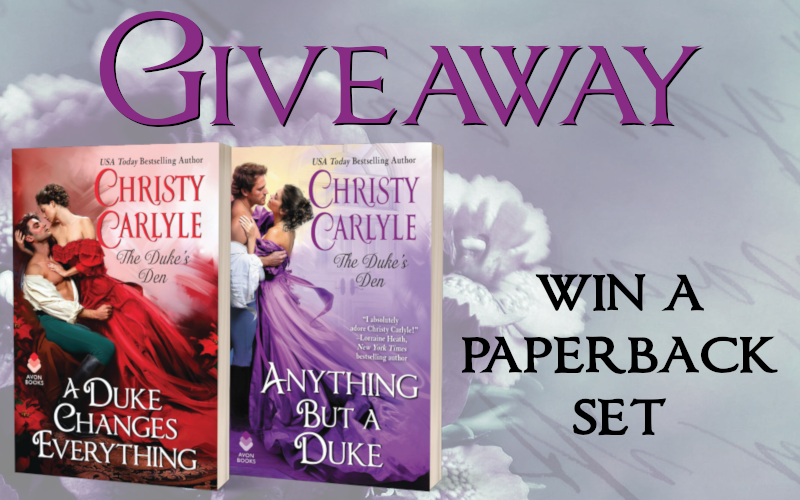 GIVEAWAY TERMS & CONDITIONS:  Open to US shipping addresses only. One winner will receive a paperback set of A Duke Changes Everything and Anything But a Duke by Christy Carlyle. This giveaway is administered by Pure Textuality PR on behalf of Avon Romance.  Giveaway ends 5/16/2019 @ 11:59pm EST. Avon Romance will send the winning copies out to the winner directly.

One thought on “Review: Anything but a Duke by Christy Carlyle + Giveaway”