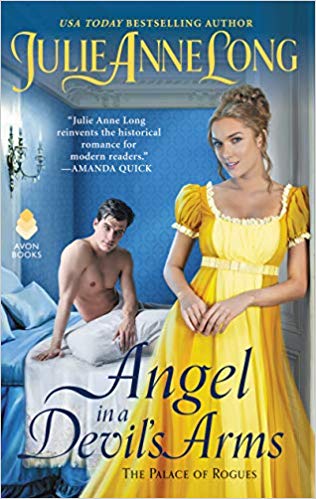 He has devil's blood in his veins. At least, that's always been the legend. How else could the Duke of Brexford's notorious bastard son return from the dead? The brutal decade since Lucien Durand, Lord Bolt, allegedly drowned in the Thames forged him into a man who always gets what—and who—he wants. And what he wants is vengeance for his stolen birthright...and one wild night in Angelique Breedlove's bed.

Angelique recognizes heartbreak when the enigmatic Lord Bolt walks into The Grand Palace on the Thames, and not even his devastating charm can tempt her to risk her own ever again. One scorching kiss drives home the danger.

But in the space between them springs a trust that feels anything but safe. And the passion—explosive, consuming—drives Lucien to his knees. Now his whole life depends on proving his love to a woman who doesn't believe in it...because his true birthright, he now knows, is guardian of Angelique Breedlove's heart. 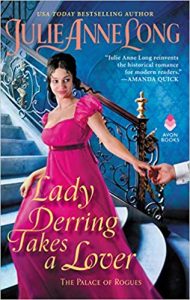 I picked up Angel in a Devil’s Arms because I absolutely adored the first book in the Palace of Rogues series, Lady Derring Takes a Lover. That first book was just an absolutely terrific time. It sparkled with wit and humor and romance to the point where I smile just thinking about it.

But the marvelousness of Lady Derring makes it a very difficult act to follow for this second book in the series.

These are two very different romances, in part because the home-like inn and business venture grandly named The Grand Palace on the Thames is in a much better – and more successful position than it was during the first book.

But especially because Lady Delilah Derring (the Lady Derring of the first title) and Mrs. Angelique Breedlove (the Angel of the second) are, in spite of being the best of friends – or possibly because – very different people.

Including the way that they ended up in this business together. Lady Derring spent her life attempting to stay on the straight and narrow all of her life, while Angelique Breedlove got shoved off the path early in hers. There’s an irony in them both ending up in the same place – and at the dead hands of the same man – but that’s the story of the first book.

At this point, Delilah has found her happy ever after in the arms of the law-and-order bent Captain Hardy. Angelique begins this story happy for her friend and content with the safe and ordered life she has made for herself.

A life that is disturbed by Lucien Durand’s advent into their haven and into the midst of their found family.

Because Lucien, in spite of his title, was shoved off that straight and narrow path just as forcibly as Angelique – and just as early. He’s a bastard, both in the literal and figurative sense, but the literal sense definitely came first. The circumstances of his birth only form one part of what has made him the man he is. That his noble father’s wife attempted to have him murdered is certainly an even bigger part of how he came to be quite as scandalous as he is.

Also the reason that the ton has believed he was dead for the past decade – because he very nearly was.

Lucien is back in London, whether to exact revenge or simply rub everyone’s nose in his success – as well as his successfully continuing to breathe – is anyone’s guess. That he would find peace and contentment among Delilah and Angelique’s little found family – because of and not in spite of the rather unusual rules they insist that ALL their guests adhere to – no matter how rich or noble – is as much of a surprise to him as it is to anyone else.

That Lucien and Angelique, with their different perspectives on their surprisingly similar emotional wounds, would be drawn to each other like iron filings to magnets astonishes them both.

She’s been hurt by men who wanted her too many times to give in easily. And he’s been abandoned too often by people he thought loved him to believe that he’s capable of that emotion.

But they are. They both, most definitely, are.

Escape Rating B: I liked reading Angelique and Lucien’s story, and I adore Angelique as a character. But this is a very different book from Lady Derring Takes a Lover, and it suffers in the comparison.

Angel in a Devil’s Arms is a much quieter book than the first one. There was just so much going on in that first book. Not only do Delilah and Angelique go into business together, they create the inn of their dreams, begin putting together their found family AND help Captain Hardy uncover the smuggling ring.

That’s a LOT. And the dialog between Delilah and Captain Hardy zips and zings all along the way.

Angelique and Lucien’s romance is very different. They both been battered a lot more by the school of hard knocks – and taken more than their share of those knocks – then Delilah and Tristan, even though their road was far from easy.

Angelique and Lucien are both wounded souls, and both wounded in the same way. Angelique was seduced and betrayed and ended her “career” as the late unlamented Lord Derring’s mistress because she had no other choices. Lucien’s mother was the mistress of an Earl who abandoned both her and Lucien when Lucien was 15, at the behest of his new wife. The one who tried to have Lucien killed. Those acts embittered Lucien and killed his mother – even before the attempted murder.

But they are both coming from rather dark places and are having difficult times making peace with themselves. That they manage to find peace with each other is a surprise and not initially a welcome one. They both have to change who they thought they were to make it work – and they very nearly don’t.

Angel in a Devil’s Arms misses the dramatic ups and downs of the first book. But the happy ever after is still very much earned.

GIVEAWAY TERMS & CONDITIONS: Open to US shipping addresses only. One winner will receive a paperback copy of Lady Derring Takes a Lover by Julie Anne Long. This giveaway is administered by Pure Textuality PR. Giveaway ends 11/12/2019 @ 11:59pm EST.

One thought on “Review: Angel in a Devil’s Arms by Julie Anne Long + Giveaway”